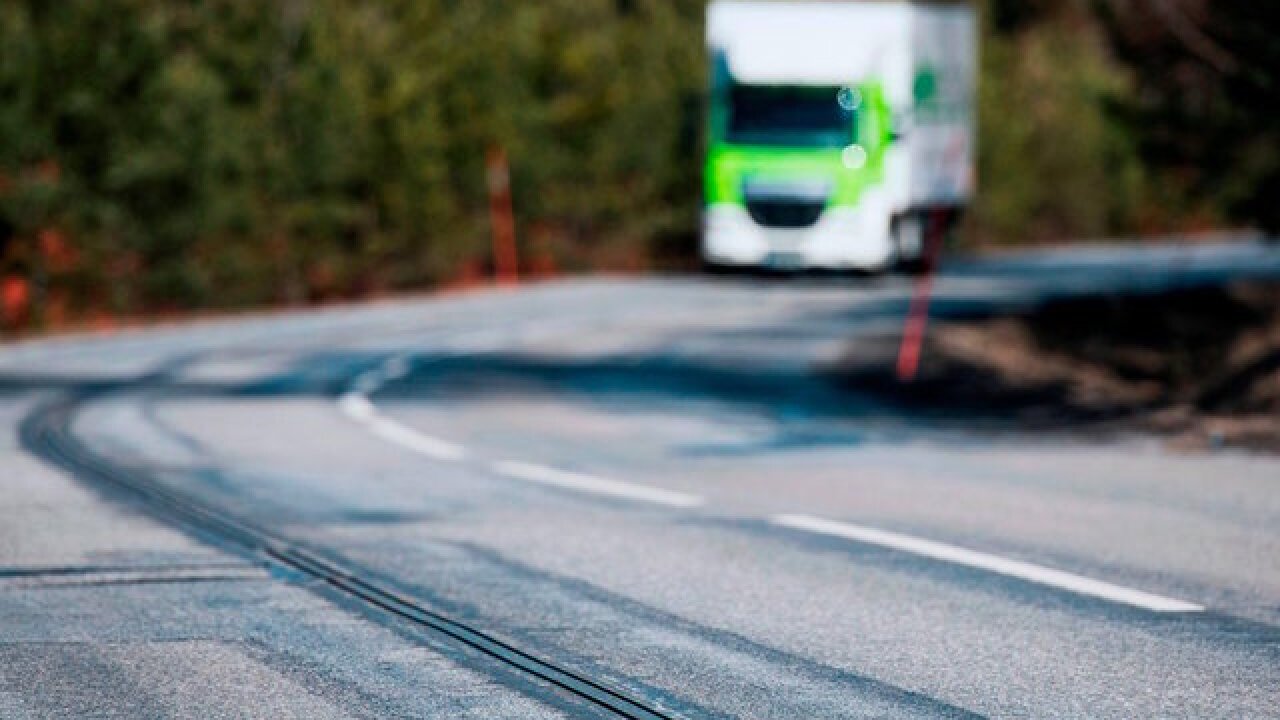 © 2018 Cable News Network, Inc.
Jonathan Nackstrand/Getty Images
<p>This eRoadArlanda is an example of a sustainable and cost-effective solution to enable the electrification of existing commercial roads.</p>

For anyone who used to play with slot cars as a child, Sweden's new electrified road might bring back some memories.

In the first of its kind, the Scandinavian country is trialling the world's first public road which allows electric vehicles to recharge while driving. Similar to a slot-car track, vehicles are able to connect to an electric rail that's embedded into the road.

Sweden has a goal of achieving a completely fossil fuel free vehicle fleet by 2030, so this electrified road is part of several projects the Swedish Transport Administration has created to develop and test technologies that may be able to help the country reach its target.

In this particular project, ' eRoadArlanda ', electricity is transferred via a movable arm that attaches to the tracks built into the middle of the road. While the system is designed with the capacity to feed heavier vehicles such as trucks, it's also developed to work for cars and buses.

When vehicles approach the track, a sensor from the car or truck detects the electrified rail and the movable arm lowers from underneath the vehicle and inserts into the rail. The arm has been designed to be flexible, providing the car, or truck, the freedom to move around the road without disconnecting.

"One of the most important issues of our time is the question of how to make fossil-free road transportation a reality," Hans Säll, chairman of the eRoadArlanda says.

"We now have a solution that will make this possible, which is amazing. Sweden is at the cutting edge of this technology, which we now hope to introduce in other areas of the country and the world."

The track stretches along two kilometers (1.2 miles) and has been installed on public road "893" just 30 minutes outside of Stockholm.

The eRoad has many advantages, Säll says. If implemented it will mean electric vehicle batteries can be smaller -- and therefore lighter -- because they won't need to retain as much charge, the vehicles will then be cheaper to manufacture and will ultimately be more sustainable.

For a heavy truck to be 100% electric, he explains, it would need a battery that weighs 40 tonnes. But if technology like the eRoad was readily available, the truck's battery would be able to weigh as little as 600 kilograms.

It would also fix a wider issue that many electric vehicle owners face: The worry and inconvenience of keeping vehicles charged.

"Today you're not 100% sure how far you can go with your battery but if you have a combination of electric roads you will feel a little bit more confident that you'll get where you want to go," Säll says.

The technology is also safe and adverse weather such as rain, snow and ice should not cause any major issues thanks to draining and usual maintenance. The electricity also isn't a risk to humans or animals.

There will also be plenty of signage around the area indicating the road is electrified and the system is equipped with safety circuits.

Säll says while the new project cost €6.4 million ($7.7 million) to develop, if it were more widely implemented across the country it would eventually work out less than €1 million ($1.2 million) per kilometer to build.

That is, if the government decides to implement it nationally.

"The Government wants to test one or two additional technologies ... that will then be evaluated in two years or so, (and) after that they will pick out one of those technologies (that have been tested) to build a longer pilot stretch that will be between 20 and 40 kilometers," he says.

For now, the eRoad will be used and trialled for two years by a truck carrying freight in order to determine how well the innovation works under various weather conditions and in conjunction with normal road traffic.