The New Yorker uninvites Steve Bannon from its festival after backlash 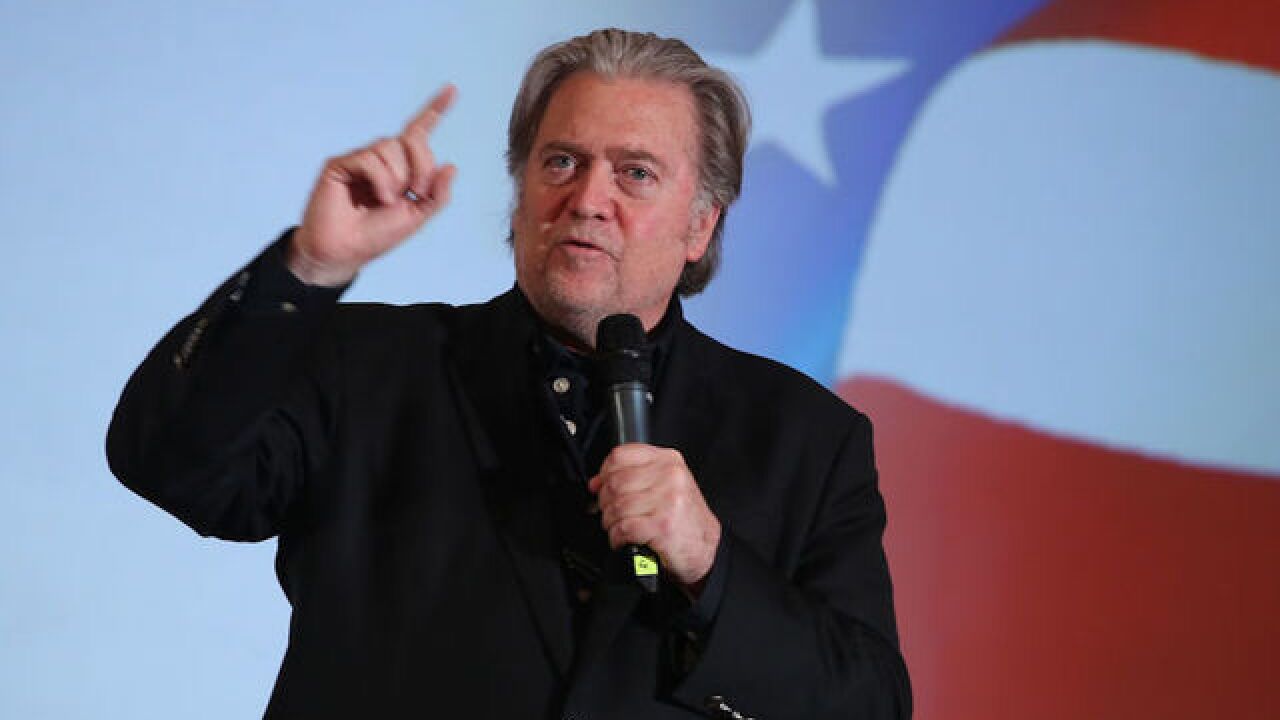 The New Yorker rescinded its invitation to Steve Bannon to headline its annual festival after a swift backlash from big-name participants who said they would not attend if Bannon remained on the schedule.

There was also fierce resistance from within the ranks of the magazine. Numerous staffers felt that having Bannon on stage would be inappropriate.

Bannon responded to the uproar by criticizing the magazine and the "howling online job."

The about-face happened in the span of a few hours on Monday. But the booking had been in the works for months.

The magazine's top editor, David Remnick, had been seeking an interview with Bannon. Eventually he was invited to appear on stage at the festival in early October. He accepted, and The New York Times revealed Bannon's appearance in an article on Monday morning.

Some New Yorker staffers objected. And so did an assortment of voices on social media. Some of them asserted that The New Yorker, both in location and orientation, stands in opposition to many of Bannon's agenda items. They urged Remnick and the magazine to reconsider.

In the 5 p.m. hour on Labor Day, several prominent celebrities who were also on the festival schedule said they would drop out if Bannon were to appear.

Jim Carrey, Judd Apatow and Patton Oswald were among the others. "If Steve Bannon is at the New Yorker festival I am out, I will not take part in an event that normalizes hate," Apatow tweeted.

By then, Remnick was already working on a response letter. Around 6:15 p.m., he emailed staffers to say "I've thought this through and talked to colleagues — and I've re-considered. I've changed my mind."

He said Bannon was being uninvited from the festival.

"If the opportunity presents itself I'll interview him in a more traditionally journalistic setting as we first discussed, and not on stage," he wrote.

"To interview Bannon is not to endorse him," Remnick wrote.

But he also had to think about practical factors like ticket sales and severe dissent within the magazine.

Staff writer Adam Davidson tweeted that Remnick "spent all day today on the phone with writers and staffers telling him he's wrong. He listened, he heard."

Davidson and others defended Remnick's leadership skills despite the controversy.

Alexandra Schwartz, another staff writer, tweeted, "My feeling is that David Remnick has good journalistic motives for wanting to interview Bannon, but that such an interview should never have been part of the Festival. I don't think he buckled or caved or whatever. He listened & thought the thing through again."

But even within the magazine's ranks, there was spirited debate.

Longtime staff writer Malcolm Gladwell responded to one of Schwartz's comments and said, "Huh. Call me old-fashioned. But I would have thought that the point of a festival of ideas was to expose the audience to ideas. If you only invite your friends over, it's called a dinner party."

Meanwhile, conservative activists ridiculed the magazine for the back-and-forth and said barring Bannon from the festival was another example of "deplatforming."

In a statement, Bannon said he accepted The New Yorker's initial invitation after multiple requests.

"After being contacted several months ago and with seven weeks of continual requests for this event, I accepted The New Yorker's invitation with no thought of an honorarium," he said. "The reason for my acceptance was simple: I would be facing one of the most fearless journalists of his generation. In what I would call a defining moment, David Remnick showed he was gutless when confronted by the howling online mob."

He also appeared as a keynote speaker at a Financial Times event in March.

In 2016, Steve Bannon played a critical role in electing the current President of the United States. On Election Night I wrote a piece for our website that this event represented "a tragedy for the American republic, a tragedy for the Constitution, and a triumph for the forces, at home and abroad, of nativism, authoritarianism, misogyny, and racism." Unfortunately, this was, if anything, an understatement of what was to come.

Today, The New Yorker announced that, as part of our annual Festival, I would conduct an interview with Bannon. The reaction on social media was critical and a lot of the dismay and anger was directed at me and my decision to engage him. Some members of the staff, too, reached out to say that they objected to the invitation, particularly the forum of the festival.

The effort to interview Bannon at length began many months ago. I originally reached out to him to do a lengthy interview with "The New Yorker Radio Hour." He knew that our politics could not be more at odds----he reads The New Yorker----but he said he would do it when he had a chance. It was only later that the idea arose of doing that interview in front of an audience.

The main argument for not engaging someone like Bannon is that we are giving him a platform and that he will use it, unfiltered, to propel further the "ideas" of white nationalism, racism, anti-Semitism, and illiberalism. But to interview Bannon is not to endorse him. By conducting an interview with one of Trumpism's leading creators and organizers, we are hardly pulling him out of obscurity. Ahead of the mid-term elections and with 2020 in sight, we'd be taking the opportunity to question someone who helped assemble Trumpism. Early this year, Michael Lewis interviewed Bannon, who made it plain how he viewed his work in the campaign. "We got elected on Drain the Swamp, Lock Her Up, Build a Wall," Bannon said. "This was pure anger. Anger and fear is what gets people to the polls." To hear this was valuable, as it revealed something about the nature of the speaker and the campaign he helped to lead.

The point of an interview, a rigorous interview, particularly in a case like this, is to put pressure on the views of the person being questioned.

There's no illusion here. It's obvious that no matter how tough the questioning, Bannon is not going to burst into tears and change his view of the world. He believes he is right and that his ideological opponents are mere "snowflakes." The question is whether an interview has value in terms of fact, argument, or even exposure, whether it has value to a reader or an audience. Which is why Dick Cavett, in his time, chose to interview Lester Maddox and George Wallace. Or it's why Oriana Fallaci, in "Interview with History," a series of question-and-answer meetings with Henry Kissinger and Ayatollah Khomeini and others, contributed something to our understanding of those figures. Fallaci hardly changed the minds of her subjects, but she did add something to our understanding of who they were. This isn't a First Amendment question; it's a question of putting pressure on a set of arguments and prejudices that have influenced our politics and a President still in office.

Some on social media have said that there is no point in talking to Bannon because he is no longer in the White House. But Bannon has already exerted enormous impact on Trump; his rhetoric, ideas, and tactics are evident in much of what this President does and says and intends. We heard Bannon in the inaugural address, which announced this Presidency's divisiveness, in the Muslim ban, and in Trump's reaction to Charlottesville.What's more, Bannon has not retired. His attempt to get Roy Moore elected in Alabama failed but he has gone on to help further the trend of illiberal, nationalist movements around the country and abroad.

There are many ways for a publication like ours to do its job: investigative reporting; pointed, well-argued opinion pieces; Profiles; reporting from all over the country and around the world; radio and video interviews; even live interviews. At the same time, many of our readers, including some colleagues, have said that the Festival is different, a different kind of forum. It's also true that we pay an honorarium, that we pay for travel and lodging. (Which does not happen, of course, when we interview someone for an article or for the radio.) I don't want well-meaning readers and staff members to think that I've ignored their concerns. I've thought this through and talked to colleagues----and I've re-considered. I've changed my mind. There is a better way to do this. Our writers have interviewed Steve Bannon for The New Yorker before, and if the opportunity presents itself I'll interview him in a more traditionally journalistic setting as we first discussed, and not on stage.