Teens taunted a Native American elder at the Lincoln Memorial 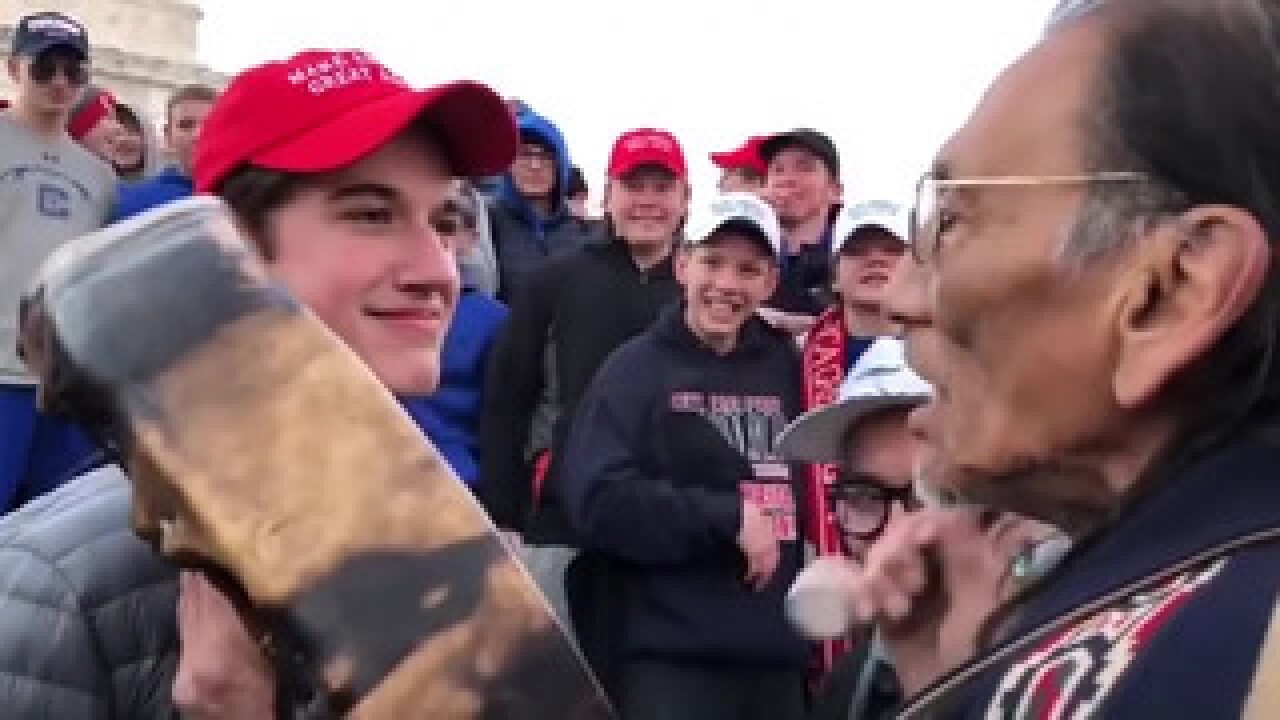 (CNN) -- A crowd of teenagers surrounded a Native American elder and other activists and mocked them after Friday's Indigenous Peoples March at the Lincoln Memorial.

Videos of the confrontation show a smiling young man in a red Make America Great Again hat standing directly in front of the man, who was playing a drum and chanting. Other kids could be seen laughing, jumping around and making fun of the chants.

"I did not feel safe in that circle," said Kaya Taitano, a student at the University of the District of Columbia who participated in the march and shot the videos.

She told CNN that the teens were chanting things like "Build the wall" and "Trump 2020."

Taitano said the whole incident started when the teens and four young African-Americans, who'd been preaching about the Bible nearby, started yelling and calling each other names.

It got pretty intense, Taitano said, so Nathan Phillips, an elder with the Omaha tribe, started playing his drum and chanting what she was told was a healing prayer, to help defuse the situation.

Phillips walked through the crowd, and Taitano said things were starting to calm down until he got to the grinning boy seen in the video.

"This one kid just refused to move and he just got in Nathan's face," she said.

Other boys circled around, she said. "They just surrounded him and they were mocking him and mocking the chant. We really didn't know what was going to happen there."

Phillips is a Vietnam veteran who says he served between 1972 and 1976. He is a former director of the Native Youth Alliance and holds an annual ceremony honoring Native American veterans in Arlington National Cemetery.

"I was scared, I was worried for my young friends. I don't want to cause harm to anyone," Philips told CNN's Sara Sidner. "I don't like the word 'hate.' I don't like even saying it, but it was hate unbridled. It was like a storm."

The crowd kept growing as Phillips and the boy stood face to face, but Phillips kept on chanting and playing his drum.

"What the young man was doing was blocking my escape. I wanted to leave. I was thinking, 'How do I get myself out of this? I want to get away from it,'" Phillips said.

Taitano said the standoff continued until a chaperone came and led the teens away for a photograph.

Some of the boys could be seen wearing hoodies and jackets with the name of Covington Catholic High School, an all-boys' school in Northern Kentucky.

The school's website said a group of students was attending Friday's March for Life rally in Washington.

The school is part of the Roman Catholic Diocese of Covington, and in a statement given to CNN affiliate WLWT, spokeswoman Laura Keener said the diocese would investigate the incident and take appropriate action.

"We condemn the actions of the Covington Catholic High School students towards Nathan Phillips specifically, and Native Americans in general, Jan. 18, after the March for Life, in Washington, D.C. We extend our deepest apologies to Mr. Phillips. This behavior is opposed to the Church's teachings on the dignity and respect of the human person.

"The matter is being investigated and we will take appropriate action, up to and including expulsion. We know this incident also has tainted the entire witness of the March for Life and express our most sincere apologies to all those who attended the March and all those who support the pro-life movement."

CNN has reached out to the school and diocese for comment.

Taitano, who is from Guam, said she was raised to treat her elders with respect so it hurt to see them treat Phillips so badly.

Phillips also appeared upset in a video Taitano posted after the confrontation. He wiped away tears as he talked about the chants of "build that wall."