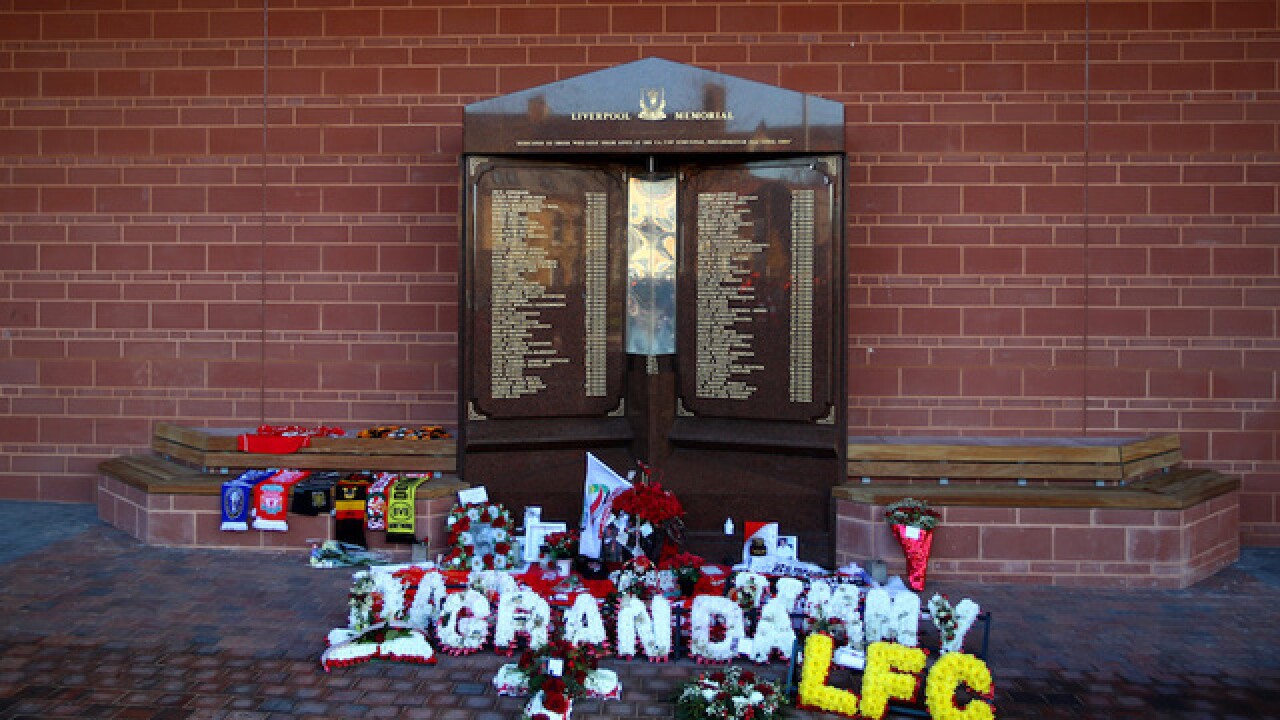 Copyright Getty Images
Clive Brunskill
<p>LIVERPOOL, ENGLAND - NOVEMBER 26: Flowers are offered at the Hillsborough disaster memorial at the stadium prior to the Premier League match between Liverpool and Sunderland at Anfield on November 26, 2016 in Liverpool, England. (Photo by Clive Brunskill/Getty Images)</p>

WARRINGTON (CNN) -- Britain's Crown Prosecution Service has confirmed that it has charged six people with criminal offenses over the 1989 Hillsborough disaster in which 96 supporters of Liverpool football club lost their lives.

A former senior police officer, David Duckenfield, will face manslaughter charges over 95 of the 96 deaths.

The decision, which comes 28 years after the tragedy, follows last year's inquests which found that those who died were unlawfully killed.

In an attempt to relieve the bottleneck of Liverpool supporters attempting to enter the stadium before kickoff, police opened an exit gate and people rushed to get inside.

More than 3,000 fans were funneled into an area already packed with people with a safe capacity of just 1,600. Panic ensued and many fans were crushed to death.

The fatal crush, which led to the game abandoned after just six minutes, led to all-seater stadiums being introduced across England.

The defendants, except for Duckenfield, will appear at Warrington Magistrates' Court on August 9. A date for Duckenfield's court appearance will be set later.

British Prime Minister Theresa May said the day would be one of "mixed emotions" for the families of the victims who were informed of the decision this morning.

Barry Devonside, whose son Christopher, 18, was killed in the disaster, told reporters of the scene inside Parr Hall, Warrington, when families were informed of the decision to launch criminal proceedings against Duckenfield.

"Everybody applauded when it was announced that the most senior police officer on that particular day will have charges presented to him," Devonside told reporters.

Who has been charged?

David Duckenfield: The match commander for South Yorkshire Police on the day of the disaster has been charged with manslaughter over 95 of the 96 deaths.

"We will allege that David Duckenfield's failures to discharge his personal responsibility were extraordinarily bad and contributed substantially to the deaths of each of those 96 people who so tragically and unnecessarily lost their lives, Sue Hemming, the CPS Head of Special Crime and Counter Terrorism Division, said in a statement.

"The offense clearly sets out the basis of those allegations. We are unable to charge the manslaughter of Anthony Bland, the 96th casualty, as he died almost four years later.

"The law as it applied then provided that no person could be guilty of homicide where the death occurred more than a year and a day later than the date when the injuries were caused."

Prosecutors explained that they are unable to charge Duckenfield over the death of Tony Bland, the 96th victim, who died four years after the disaster because of legal reasons. The law as it applied then provided that no person could be guilty of homicide where the death occurred more than a year and a day later than the date when the injuries were sustained.

Norman Bettison -- A former officer with South Yorkshire Police and subsequently Chief Constable of Merseyside and West Yorkshire Police, Bettison has been charged with four offenses of misconduct in public office relating to telling alleged lies about his involvement in the aftermath of Hillsborough and the culpability of fans.

Graham Henry Mackrell - Mackrell was Sheffield Wednesday Football Club's company secretary and safety officer at the time of the disaster and has been charged over health and safety offenses.

He has been charged with two offenses of contravening a term of condition of a safety certificate contrary to the Safety of Sports Grounds Act 1975 and one offense of failing to take reasonable care for the health and safety of other persons who may have been affected by his acts or omissions at work under the Health and Safety at Work Act 1974.

Peter Metcalf - Metcalf acted as solicitor for the South Yorkshire Police during the Taylor Inquiry and the first inquests.

He has been charged with doing acts with intent to pervert the course of public justice relating to material changes made to witness statements.

Former South Yorkshire police officers Donald Denton and Alan Foster, have both been charged for their role in perverting the course of justice along with Metcalf.