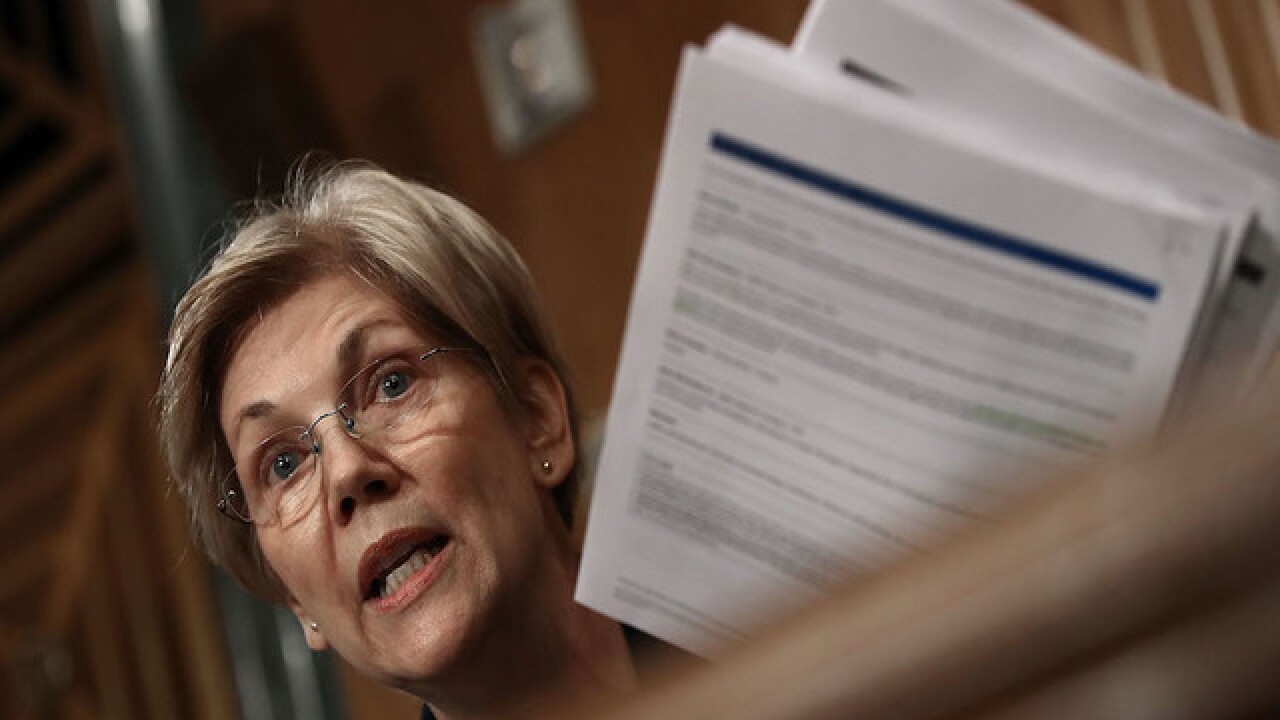 And by doing so, majority Republicans just handed the liberal firebrand a megaphone -- further elevating President Donald Trump's fiercest and most prominent critic in the Senate and turning her into a Democratic hero.

"They can shut me up, but they can't change the truth," Warren later told CNN's Don Lemon.

The rebuke of Warren came as the Massachusetts Democrat read a letter that Coretta Scott King, the widow of Martin Luther King Jr., had written 30 years ago opposing the nomination of Jeff Sessions for a federal judgeship.

Sessions -- now an Alabama senator -- is Trump's nominee for attorney general. Warren opposes him, and cited King's letter to members of the Senate Judiciary Committee in 1986. "Mr. Sessions has used the awesome power of his office to chill the free exercise of the vote by black citizens in the district he now seeks to serve as a federal judge," King wrote then.

Republicans cried foul -- charging that Warren violated Senate rules against impugning another senator. A party-line vote upheld that decision, turning what could have been an ordinary late-night partisan floor speech for C-SPAN devotees into a national story.

It means Warren is now forbidden from participating in the floor debate over Sessions' nomination ahead of a confirmation vote expected Wednesday.

"She was warned. She was given an explanation. Nevertheless, she persisted," Senate Majority Leader Mitch McConnell, R-Kentucky, said on the Senate floor.

The line was an instant classic -- the kind liberals envision being replayed ad nauseum in TV ads in a future presidential campaign.

And it couldn't have come at a better time for Warren, who is up for re-election in 2018. On Tuesday, she announced she hired an aide who is an expert on national security, a move that could help burnish her expertise in that area, as well as the publication of a new book, which will become available in April.

Liberals had been frustrated with Warren's vote in committee in favor of Ben Carson, Trump's nominee for secretary of Housing and Urban Development.

By Tuesday night, the hashtag #LetLizSpeak was trending on Twitter.

Warren took to Twitter herself to attack both Sessions and McConnell.

"I will not be silent about a nominee for AG who has made derogatory & racist comments that have no place in our justice system," she wrote.

In a follow-up tweet, she said: "I will not be silent while the Republicans rubber stamp an AG who will never stand up to the @POTUS when he breaks the law."

And then: "Tonight @SenateMajLdr silenced Mrs King's voice on the Sen floor - & millions who are afraid & appalled by what's happening in our country."

Warren went straight from the Senate floor to a call-in appearance on Rachel Maddow's MSNBC show, a favorite of progressives. "I've been red-carded on Sen. Sessions. I'm out of the game of the Senate floor," she told Maddow.

Meanwhile, the Democratic National Committee blasted out a supportive statement, with interim chairwoman Donna Brazile saying: "It's a sad day in America when the words of Martin Luther King Jr.'s widow are not allowed on the floor of the United States Senate. Let Elizabeth Warren speak."

The moment became a rallying cry for fellow Democrats. California Sen. Kamala Harris took to the Senate floor to call the vote to silence Warren "outrageous."

"I never ever saw a time when a member of the Senate asked to put into the record a letter -- especially by a civil rights icon -- and somebody objected," said Sen. Patrick Leahy, D-Vermont.

The Senate descended into a series of complaints about declining decorum on both sides.

"We have to treat each other with respect or this place is going to devolve into a jungle," said seven-term Utah Republican Sen. Orrin Hatch.

Then Democrats brought out examples of Republicans who had crossed similar lines and not been shut up the way Warren was forbidden from participating.

Warren sat on the Senate floor, though, silently. She had already had her moment.