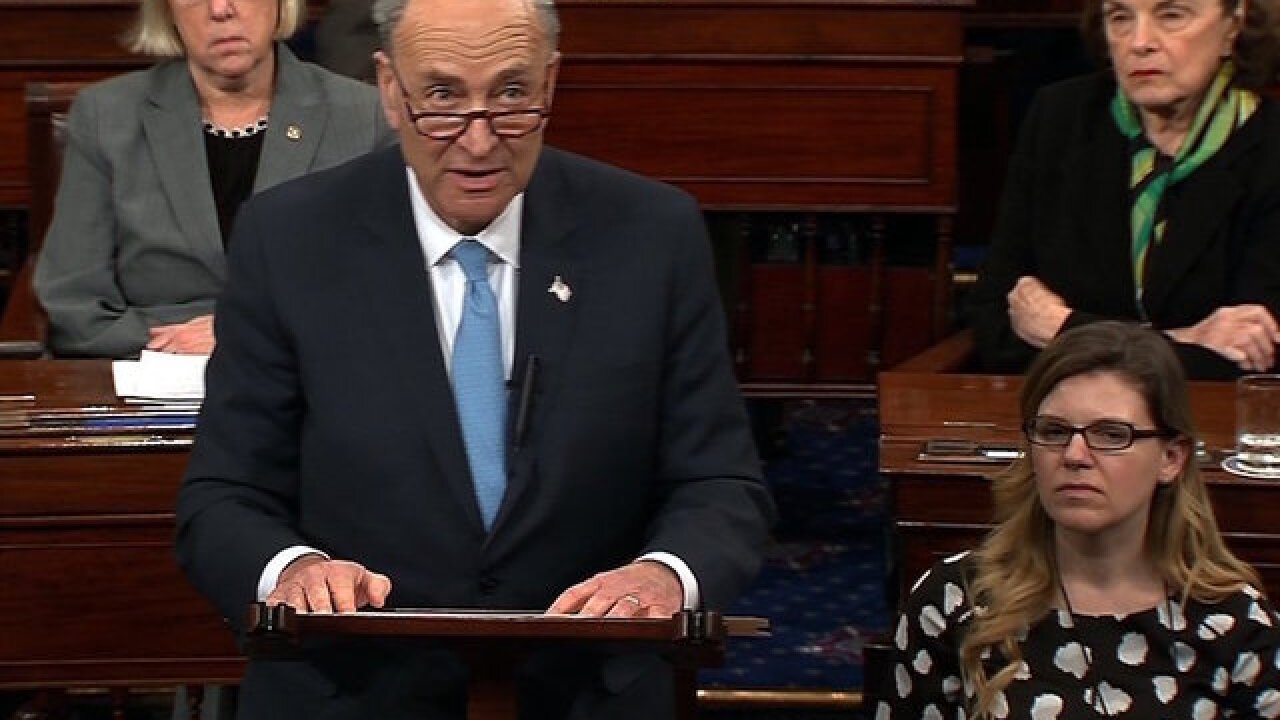 © 2018 Cable News Network, Inc.
Senate TV
<p>The federal government shut down at midnight on Friday, January 19, 2018. Senators continued to scramble to reach a deal to fund the government. Senator Chuck Schumer is seen here speaking on the night of the shutdown.</p>

The government shutdown went into a second day Sunday with recriminations deepening between the parties and with no sign of progress toward ending the impasse.

The House and the Senate will be back at work by early afternoon, but after a day of futility on Saturday, there are few hopes of a sudden breakthrough to resolve a showdown over the refusal of Senate Democrats to vote to fund the government until President Donald Trump agrees to deal with the fate of 700,000 people brought to the US illegally as children.

The White House, and Republican and Democratic leaders spent most of Saturday apportioning blame as they sought to shape the political fallout from the shutdown that will only truly begin to hit home on Monday when government departments stay dark after the weekend as federal workers are furloughed.

"Everyone's dug in. No movement at all from either side," said a Democratic aide.

Trump had been hoping to be the star of the show at a glitzy fundraiser at his Mar-a-Lago resort in Florida Saturday celebrating the anniversary of his inauguration. But he was forced to hole up in Washington when his trip was canceled because of the shutdown.

"There shouldn't be a shutdown, but there is," Trump said in a video recorded for showing at the event, according to a person who saw the footage. "It's caused by the Democrats. But we're gonna end up winning another victory."

But Democratic Senate leader Chuck Schumer pinned the blame directly on the President, implying that he was falling well short of his "Art of the Deal" reputation and was being led astray by hardline White House aides, Hill Republicans and conservative media.

"Negotiating with this White House is like negotiating with Jell-O, it is next to impossible," Schumer told reporters. "The President needs to pull up a chair to end this shutdown."

Republican Senate Majority leader Mitch McConnell warned that Schumer "wants to keep the government shut down for hundreds of millions of Americans until we finish negotiating on the subject of illegal immigration."

Most of the energy on both sides Saturday was devoted to key players branding the impasse either the "Trump shutdown" or the" Schumer shutdown." And for all the posturing, sources told CNN that Schumer and McConnell had not spoken since their interactions on the Senate floor in the dramatic early moments of Saturday. A Democratic source said there had been no conversations between the top Democrat and anyone in the White House on Saturday. Both sides appeared to be waiting for the other to make the first move.

The White House did put out some photos of the President on the phone and showing him surrounded by smiling members of his staff.

Republicans are resolute: no talks on DACA, the expiring Deferred Action for Childhood Arrivals program, until Democrats give them enough votes to reopen the government. Democrats, meanwhile, say they have to have an answer on the program since those affected could face deportation beginning in early March.

"It is kind of hard to understand. When you're holding our troops hostage and essentially denying services to law-abiding Americans and denying funding to our border agents, how you can negotiate on DACA during that?" Marc Short, the White House legislative affairs director, asked. "I think the administration's position is that as soon as they reopen the government, we'll resume negotiations on DACA, but it's hard to negotiate on that while they're keeping our border agents unpaid, keeping our troops unpaid, and not paying for American services."

One of the few lawmakers trying to dislodge the deadlock on Saturday was South Carolina Sen. Lindsey Graham, who appeared to be getting frustrated with his colleagues on both sides of the aisle, and even the President himself.

"How could you take an 80% issue and screw it up? How could you take funding for the military when we're at war and screw it up? There's something wrong around here. And all I am trying to tell ya is I don't want to be part of that something," Graham said. "To the extent that I can be part of the solution, I want to. I don't have all the answers. ... I do know this about what the answer is -- the answer is opening back up the government, dealing with DACA and military funding. One will not go without the other."

For now, the only possible off ramp is a three-week spending bill to fund the government until February 8 that most Democrats say is dead on arrival in the Senate.

McConnell, who spoke with Trump on Saturday morning, said Friday night he was open to the proposal.

But Republican support is only half the battle: The Senate needs 60 votes to pass the continuing resolution, and Republicans only control 51 seats.

And Democrats are adamant that they will not allow the bill to proceed until it deals with DACA, even though most lawmakers on both sides agree on most things in the legislation, including an extension of a children's health program and most do not want the government to remain closed.

"There is nothing in this bill Democrats say they object to," Short said. "Yet it's like a 2-year-old's temper tantrum to say, 'I am going to take my toys and go home because I'm upset about something else."

Schumer said that he left a meeting with Trump on Friday afternoon hopeful that a deal could be reached after reluctantly suggesting concessions on Trump's plan for a border wall in return for action on DACA recipients. But he accused the President of walking back on an agreement under pressure from right-wing members of his own administration.

"Mr. Schumer has to up his game and be more honest with the President of the United States if we are going to be seeing progress," he said.

In an interview with CNN's Manu Raju on Saturday, Schumer said that only a broad deal on a range of issues would break the deadlock.

"We need a good bipartisan agreement that allows us to get a good defense number, get a good non-defense number, get a vote on the Dreamers bill and get that done, and deal with the disasters, too," Schumer said. "There's a whole lot to do, and our Republican colleagues have sent us just a (continuing resolution) which doesn't do the job."

Both sides are convinced they have the upper hand -- one reason why the shutdown could last for a while.

Republicans feel confident that they're on the right side of the shutdown. While House Republicans were the ones who failed to deliver the votes when the government shut down in 2013. This time around, members say they want their leadership to stand firm against Senate Democrats who they believe will feel the pressure sooner or later.

Democrats believe that the fact that the GOP controls the House, the Senate and the White House will prompt voters to blame Trump and his troops.