Separating fact from fiction in the new Hoffa movie The Irishman 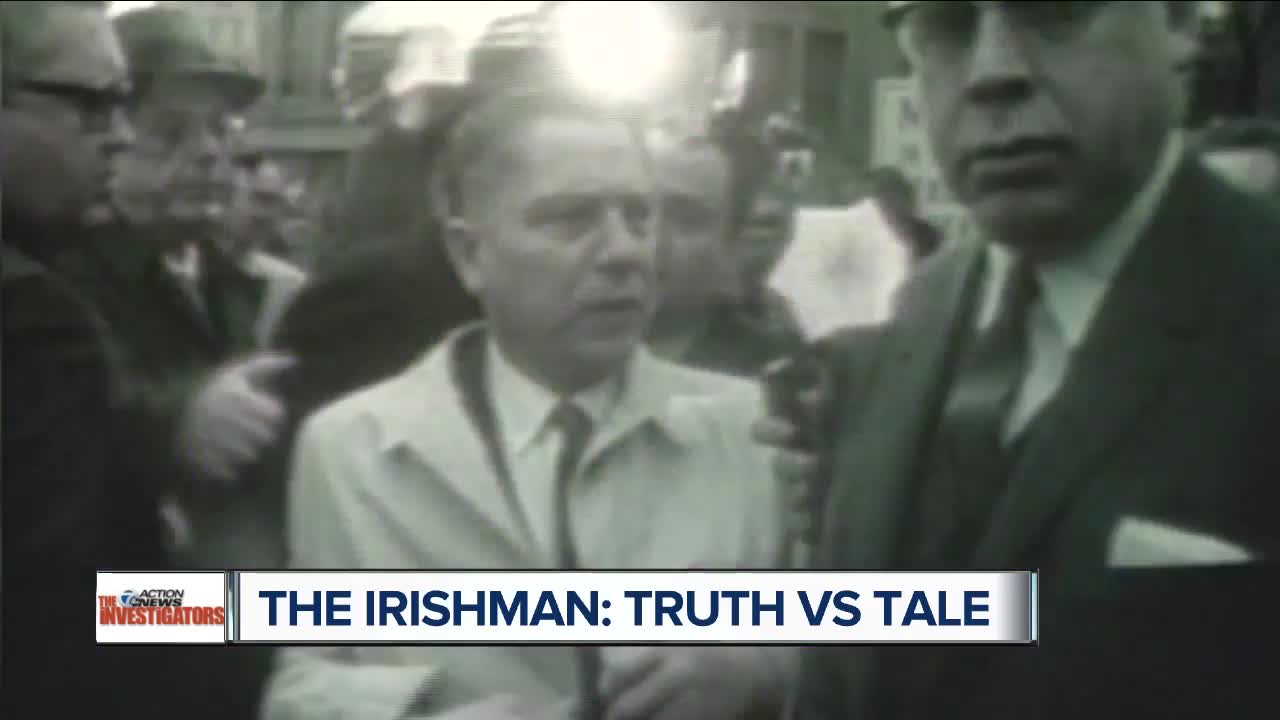 We're separating fact from fiction in The Irishman, the new Netflix movie about the Hoffa disappearance.

The mystery of what happened to Jimmy Hoffa plays a starring role in the new movie, “The Irishman.” The film tells the tale of alleged hit man Frank Sheeran - pulling the trigger on the legendary Teamsters boss.

But Hoffa experts say the story is not based in fact.

Harvard Law Professor Jack Goldsmith has a very unique connection to the case, to help determine the truth from the tale.

It’s been hailed for the amazing acting, and epic directing, but “The Irishman” truly is a work of fiction when it comes to the storyline about Jimmy Hoffa.

The legendary Teamsters leader vanished on July 30, 1975. He was last seen in the parking lot of the Machus Red Fox restaurant in Bloomfield Hills. Hoffa thought he was going to a reconciliation meeting with two mob bosses – New Jersey Teamsters official Tony Provenzano and Detroit mafia captain Tony Giacalone.

Sheeran’s so-called confession that he killed Hoffa at the mob’s request was made public in 2003 when author Charles Brandt released the book “I Heard You Paint Houses.” The movie brings that story to life on the big screen – but Hoffa experts say it’s historically just plain wrong.

Goldsmith used to work at the highest levels of the Department of Justice. He’s also the stepson of Chuckie O’Brien – Hoffa’s foster son who was once thought to have driven Hoffa to his death.

"Sheeran was not involved in killing Hoffa," he says. "And he wasn’t actually nearly as close to Hoffa as he was portrayed in the film."

Goldsmith says the feds watched a video of Sheeran’s alleged confession—and call it a lie.

"They all think it’s preposterous," he says.

Goldsmith says Sheeran was caught on FBI surveillance tape telling close friends he wasn’t even in Detroit on the day Hoffa vanished.

"He had gas receipts, he was at dinner that evening," Goldsmith says. "Nowhere near Detroit, there were 18 people who saw him and he even said in a letter soon thereafter that he gave the FBI all of that evidence why he wasn’t in Detroit."

In the movie, Sheeran shoots Hoffa in the vestibule of this home on Beaverland St. on Detroit’s west side.

Investigators removed some of the floorboards where blood was found back in 2004 – but the blood did not belong to Hoffa.

"There’s zero evidence – none at all – that connects Hoffa or Sheeran being there," Goldsmith says.

Goldsmith says his stepfather, Chuckie O’Brien hasn’t watched the movie – but he suspects O’Brien would be upset that he’s still being portrayed as the driver who picked Hoffa up at the restaurant. Goldsmith says the feds believe the known whereabouts of O’Brien that day make that impossible- and they no longer consider O’Brien a suspect.

"He would not have had time to have gone to the Machus Red Fox, picked up Hoffa, and taken him somewhere else," Goldsmith says.

Goldsmith also says Sheeran’s claim that they picked Hoffa up at 2:45 contradicts the 3:30pm phone call Hoffa made to his wife from a pay phone in the parking lot.

"There’s evidence he called his wife Josephine out at the lake where they lived," Goldmisth says. "At 3:30 in the afternoon, that he was tired of waiting for Anthony Giacolone, and that he was going to come home And then that’s the last thing we know about Hoffa. WE literally don’t have any evidence about what happened other than he disappeared."

The U.S. Attorney in Detroit recently told us there’s more to come on the Jimmy Hoffa case.

This summer marks the 45th anniversary of Hoffa’s disappearance. As for The Irishman, we have a links where Jack Goldsmith breaks down several other fact vs. fiction items from the movie .

This article was written by Heather Catallo for WXYZ .