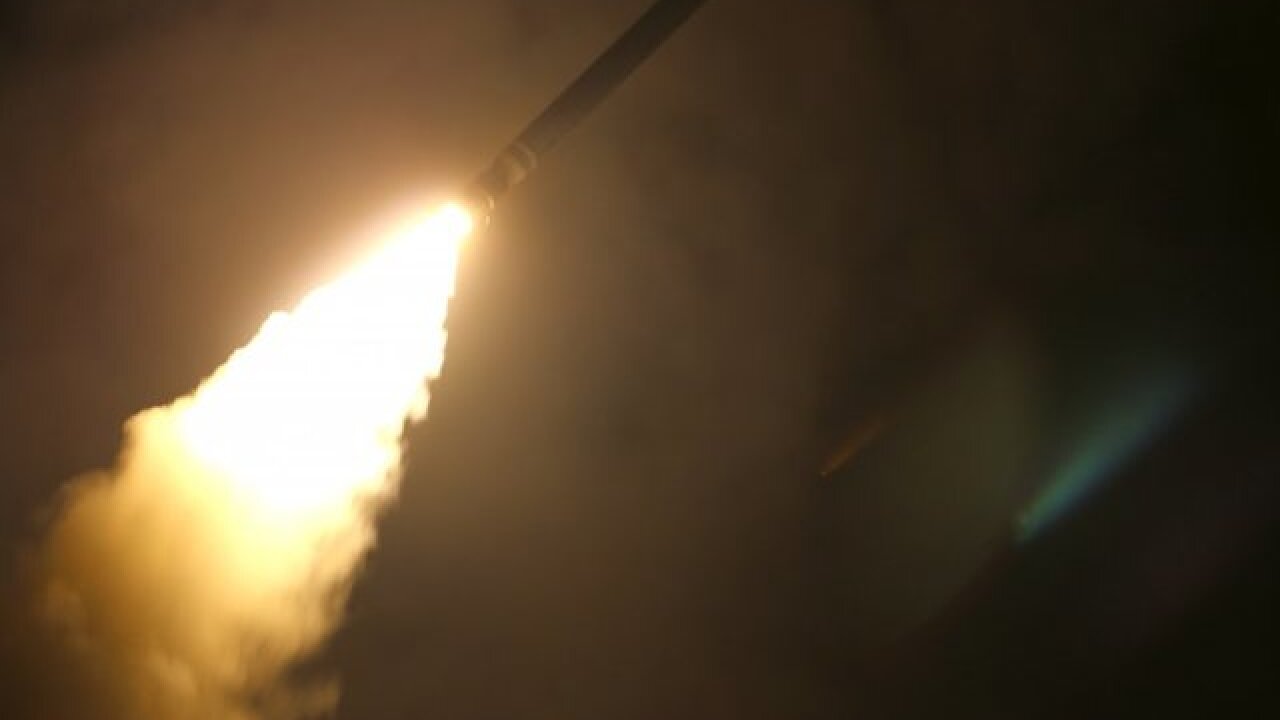 Lawmakers emerged from a classified administration briefing expressing concern about administration policy on Syria and the legal justification for last week's military strikes against the regime of Bashar al-Assad.

"I am very unnerved by what I'm hearing and seeing," said Sen. Lindsay Graham, a South Carolina Republican, who said the briefing on the strikes made him more worried, not less. The administration is "going down a dangerous path" with regards to Syria, he said, without offering details.

Washington, along with London and Paris, launched airstrikes in the wee hours of Syria's Saturday morning in response for an April 7 attack on the rebel stronghold of Douma that killed about 75 people, including children, and left another 500 in need of treatment for symptoms consistent with chemical weapons exposure.

The strike came just 10 days after President Donald Trump had said he wanted to get out of Syria, raising confusion about administration policy.

"I want to get out," Trump said during an April 3 news conference. "I want to bring our troops back home. It's time."

But on April 13, when he announced the strikes, Trump said the US would be undertaking a sustained diplomatic, military and economic response to stop the use of chemical weapons, and officials said the US would remain focused on defeating ISIS.

Senators leaving Tuesday's briefing seemed to indicate that Trump's isolationist impulses are going to win out, regardless of the consequences for US global influence, American national security interests or the fate of the region, where Iran is vying for larger influence and Russia has established itself as a power broker, edging out the US.

Democratic Sen. Chris Coons of Delaware left the meeting and told reporters, "The only thing worse than a bad plan on Syria is no plan on Syria, and the President and his administration have failed to deliver a coherent plan on the path forward."

Sen. Bob Corker, the Tennessee Republican who has sparred with Trump over foreign policy issues, exited the briefing and told reporters, "I think the administration's plans are to complete the efforts against ISIS and (then) not be involved."

Corker went on to say that, "Syria is Russia and Iran's now. They will be determining the future. We may be at the table, but when you're just talking and have nothing to do with shaping what's happening on the ground, you're just talking."

Asked if he felt the administration should do more militarily to shape events on the ground, Corker said, "They're not going to. I understand it's not going to happen. It's just not going to happen. To do so would take a significant effort by our military and I just don't think that's where the American people are right now."

The administration briefed senators as the UN Security Council held its own meeting on the situation in Syria. The strikes on Douma have ratcheted up tensions between the US, its allies and Russia. When Moscow's ambassador accused the US of striking a sovereign country, Kelly Currie, the acting deputy representative of the US, shot back -- accusing Russia of distracting from the atrocities committed by the Assad regime.

While the US went after ISIS and "actually achieved lasting gains for the Syrian people, the Assad regime was busy bombarding civilians in places like Aleppo, Idlib and Eastern Ghouta," Currie said.

"The United States will not stop focusing on the ways to achieve that goal, no matter how many times our Russian colleagues convene these cynical thinly disguised diversions," Currie said.

Coons declined to offer details of the classified meeting, which was open to all senators. But House lawmakers emerging from their own all-members briefing in a secure facility in the Capitol building said administration officials focused on their legal justifications for launching the airstrikes, and for the targets.

There was little discussion about a broader strategy for addressing the Syrian regime, or additional military or diplomatic efforts, they said.

"We certainly did get additional insights into the targeting of the facilities, what we knew about it, what we know about the attack itself, what these facilities were used for, what actions if any took place between the time the President announced we were going to strike and when we did strike, so we got an additional granularity," said California Democratic Rep. Adam Schiff.

Trump Administration officials briefing the lawmakers restated their argument that Article 2 of the Constitution, which makes the president commander of the armed forces. But many lawmakers feel the President needs congressional approval and used the hearing to argue for passage of a new Authorization of Military Force.

Rep. John Garamendi, a California Republican, argued that Article 2 is too broad, and he was concerned it could be used for additional action in other regions, saying to reporters, "that justification allows the President to wage war anywhere, anytime, anyplace he might want to, by simply saying it's in the national security interests."

Defense Secretary James Mattis, at the Pentagon Tuesday to welcome the defense minister of Albania, said the US and its allies did "what we believed is right" to deter the use of chemical weapons.

"I hope this time the Assad regime got the message," Mattis said.

Washington and its allies say they have clear evidence showing Syria is responsible for the attack and they have blamed Russia for being complicit. Moscow, meanwhile, has said that the devastation in Douma was faked by foreign intelligence agencies looking for a rationale to attack Syria.

On Tuesday, Russian state media reported that Russian military had discovered a chemical laboratory and warehouse in Douma that they claimed belonged to "militants."

Russian and Syrian control of the site has raised concerns, and on Tuesday, the French foreign ministry said it is "very likely" that evidence could "disappear" from the site of the alleged attack as OPCW inspectors still have not made it to the site.

"To date, Russia and Syria still refuse access to the site of the attack even though the investigators arrived in Syria on April 14," the French foreign ministry said in a statement.

Russian Foreign Minister Sergei Lavrov has denied that the Douma site had been tampered with, while a representative of Russia's military said on Monday that the OPCW inspectors will reach Douma on Wednesday.