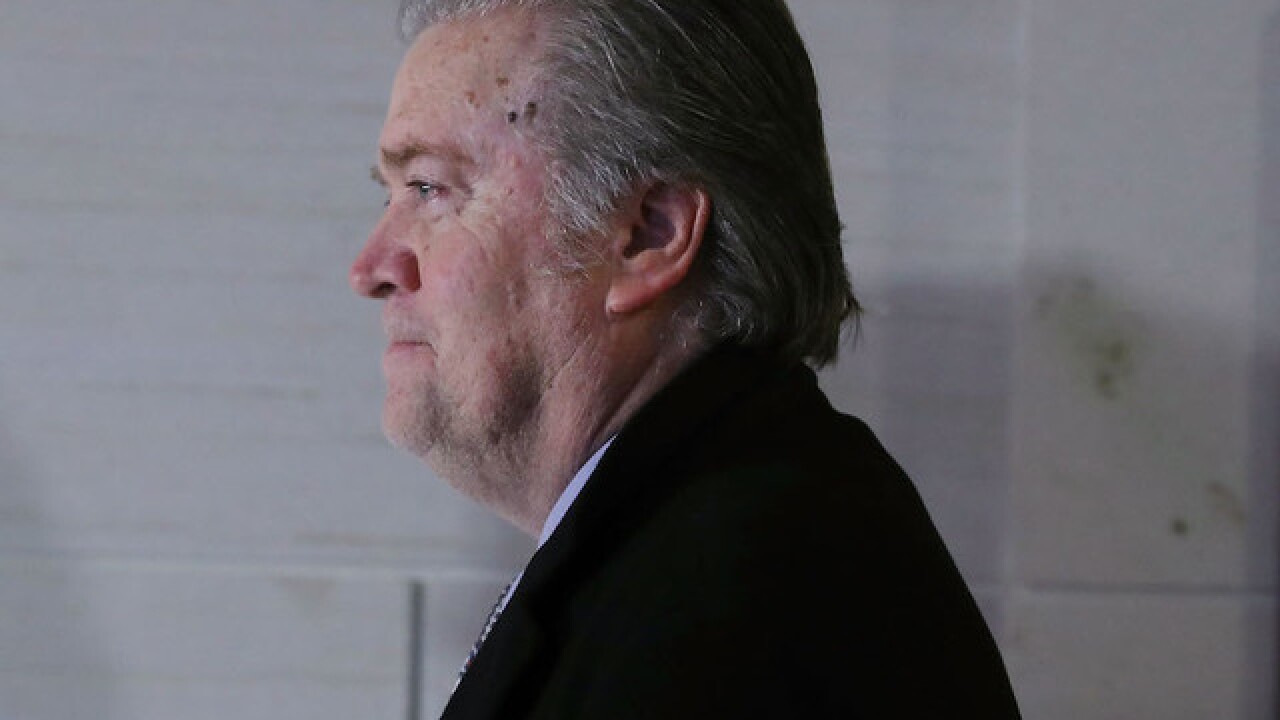 President Donald Trump's former chief strategist Steve Bannon faced angry lawmakers from both parties during a contentious interview that stretched more than 10 hours on Tuesday, as he was hit with subpoenas on multiple fronts and was accused by a top Democrat of agreeing to a White House "gag order."

Bannon confirmed to the House Intelligence Committee that he was issued a subpoena from special counsel Robert Mueller to testify before a grand jury, according to multiple sources familiar with the matter. He was also slapped with a new subpoena on Tuesday from the committee itself, according to Rep. Mike Conaway, the Texas Republican leading the committee's Russia probe, and committee chairman Rep. Devin Nunes, R-California, who still signs off on subpoenas.

Rep. Adam Schiff, the top Democrat on the committee, said after the hearing that Bannon was instructed by the White House in advance of the hearing not to respond to certain topics.

The California Democrat said the attorney for Bannon consulted with the White House after the committee subpoena was served Tuesday and was told his client was still not to answer questions regarding the time during the transition and in the White House.

Schiff called it a "gag order," saying it was an "audacious" move by the White House to assert that at a later date they may seek to invoke executive privilege.

Bannon's attorney told the committee that Bannon would answer questions when he goes to the special counsel because executive privilege would not apply, according to a source who's familiar with the process with Bannon.

Conaway said the subpoena for documents and testimony remains in effect and the committee expects to seek answers to its remaining questions.

Rep. Jim Himes, a Connecticut Democrat on the committee, told CNN's Anderson Cooper that Conaway made a determination that the "expansive claim of executive privilege doesn't apply," and said that Bannon puts himself at risk of contempt of Congress if he doesn't answer questions.

"There was a great deal of consternation on both sides of the aisle," Himes said. "I am glad to say that members of both parties really pushed back hard against this unprecedented claim."

Bannon is one of several key Trump associates coming before the panel this week, including former campaign manager Corey Lewandowski and senior White House aide Rick Dearborn, who two sources said is testifying Wednesday. Hope Hicks, the White House communications director, could meet with the committee as soon as Friday.

In the Tuesday hearing, Bannon refused to answer questions and disclose communications with key officials, including former national security adviser Michael Flynn and former White House chief of staff Reince Priebus, and he would not discuss what information he may have leaked to the news media, according to Schiff.

The Democrat added that Bannon also would not discuss how the White House responded to reports last year of the June 2016 Trump Tower meeting with Russians and Trump officials -- and whether there were any steps taken by the White House "to hinder" the Russia inquiry.

Lawmakers had been questioning Bannon for roughly 90 minutes when questions began on the transition, several sources said. Shortly into that line of questioning, Bannon was cut off by his lawyer, according to the sources. At that point, the interview stopped and the committee issued a subpoena to force him to divulge this information. GOP leaders of the committee would not rule out holding Bannon in contempt for failing to provide information.

Florida Rep. Tom Rooney, a senior Republican on the House Intelligence Committee, said Tuesday that Bannon's testimony is running into problems over whether he can invoke executive privilege for events that occurred during the transition.

"I certainly think that the committee respects executive privilege, it's when does that attach is the question that's sort of dominating the day," Rooney said. "At what time does that attach -- during the transition or during the actual swearing-in?"

In the testimony, Bannon downplayed his comments published in Michael Wolff's book, saying it was "hyperbole" when he described the June 2016 Trump Tower meeting between Donald Trump Jr. and members of the Trump campaign with Russians as treasonous and unpatriotic, two sources said. Bannon joined the campaign after the June 2016 meeting and shed little light on the meeting with Russians, the sources said.

White House press secretary Sarah Sanders said Tuesday that the White House was not concerned with what Bannon might say to Congress or special counsel Robert Mueller's team. But she did not say whether the White House directed Bannon not to answer certain questions.

"As with all congressional inquiries touching upon the White House, Congress must consult with the White House prior to obtaining confidential material," Sanders said. "This is part of a judicially recognized process that goes back decades. We've been cooperating fully with these ongoing investigations and encourage the committees to work with us to find an appropriate accommodation in order to ensure Congress obtains information necessary to its legitimate interests."

Conaway declined to tell CNN while the meeting was ongoing whether the panel would hold Bannon in contempt if he failed to divulge key information under subpoena.