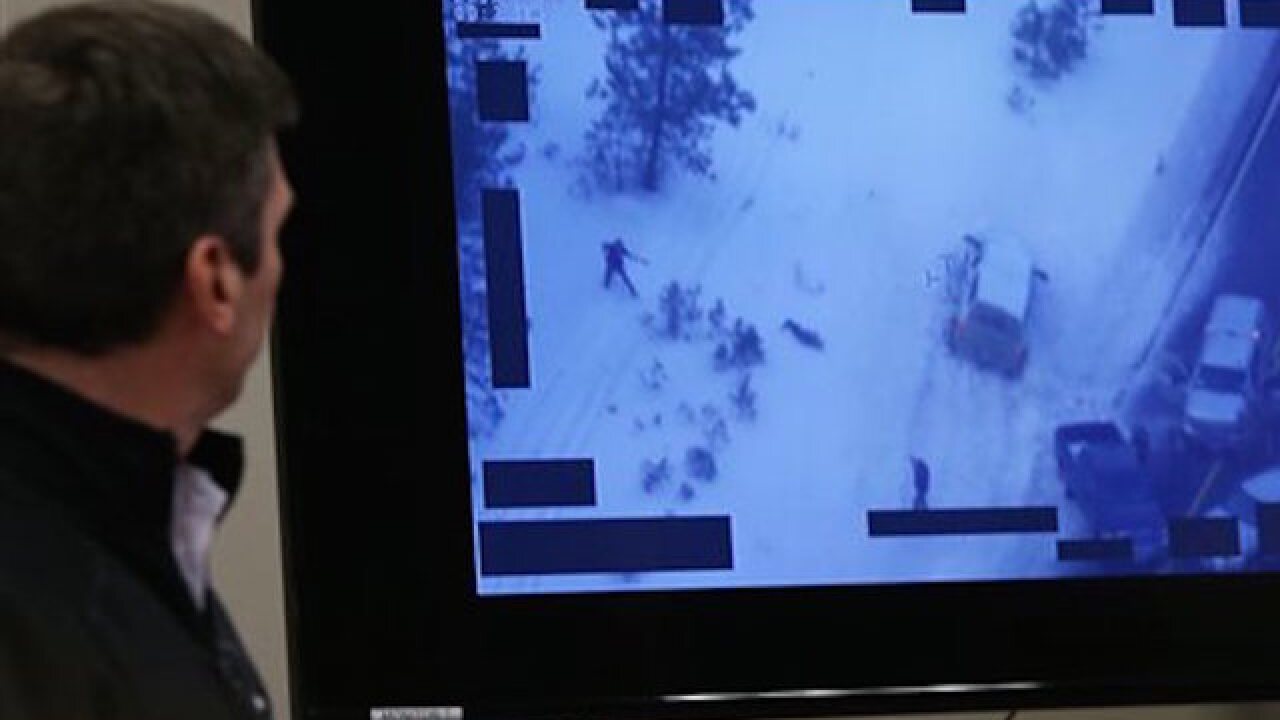 Chris Pietsch
<p>Greg Bretzing, special agent in charge for the FBI in Portland, presents video of the shooting of Robert Finicum, shown at center left on the monitor, a spokesman for the armed occupiers of a wildlife refuge, during a press conference in Burns, Ore., Thursday, Jan. 28, 2016. (Chris Pietsch/The Register-Guard via AP) MANDATORY CREDIT</p>

PORTLAND, Ore. (AP) — The last four occupiers of an Oregon wildlife refuge have posted a series of defiant videos in which one of them calls FBI agents losers, shows a defensive perimeter they have built and takes a joyride in a government vehicle.

The videos were posted Sunday on a YouTube channel called Defend Your Base, which the armed group has been using to give live updates. The holdouts are among 16 people charged with conspiracy to interfere with federal workers in the armed standoff over federal land policy that has surpassed five weeks.

In one of the new videos, occupier David Fry says the FBI told him he faces additional charges because of defensive barricades the four have built.

"We just got done talking with the FBI," said the 27-year-old Blanchester, Ohio, resident. "They consider fortifying a crime."

Fry said he, Jeff Banta of Nevada, and husband and wife Sean and Sandy Anderson of Idaho have "every right" to defend themselves from the "oncoming onslaught of people with fully automatic rifles (and) armored vehicles.

"I'm tired of you guys telling us what we can and can't do," he says.

Then Fry shows government vehicles they have been using without permission. He walks up to a white truck and says, "I think I'm going to take it on a little joyride.

"Now you've got another charge on me FBI. I'm driving your vehicle."

FBI spokeswoman Beth Anne Steele said the agency had no comment on the videos.

The four have refused to leave the Malheur National Wildlife Refuge in eastern Oregon since the compound nearly emptied out after the Jan. 26 arrests of group leader Ammon Bundy and other main figures. The group seized the property on Jan. 2, demanding federal lands be turned over to locals.

The traffic stop on a remote road outside the refuge also led police to shoot and kill Robert "LaVoy" Finicum. The FBI says the Arizona rancher was reaching for a pistol in his pocket, but Finicum's family and Bundy's followers dispute that and say his death was not justified.

Authorities surrounded the refuge after the arrests. The FBI has been negotiating, but the holdouts have said they won't go home without assurances they won't be arrested.

In another video posted Sunday, Sean and Sandy Anderson are sitting together and the husband says they feel like hostages because they can't leave without being arrested.

"What are they to do with us?" Sean Anderson says. "They either let us go, drop all charges because we're good people, or they come in and kill us. How's that going to set with America?"