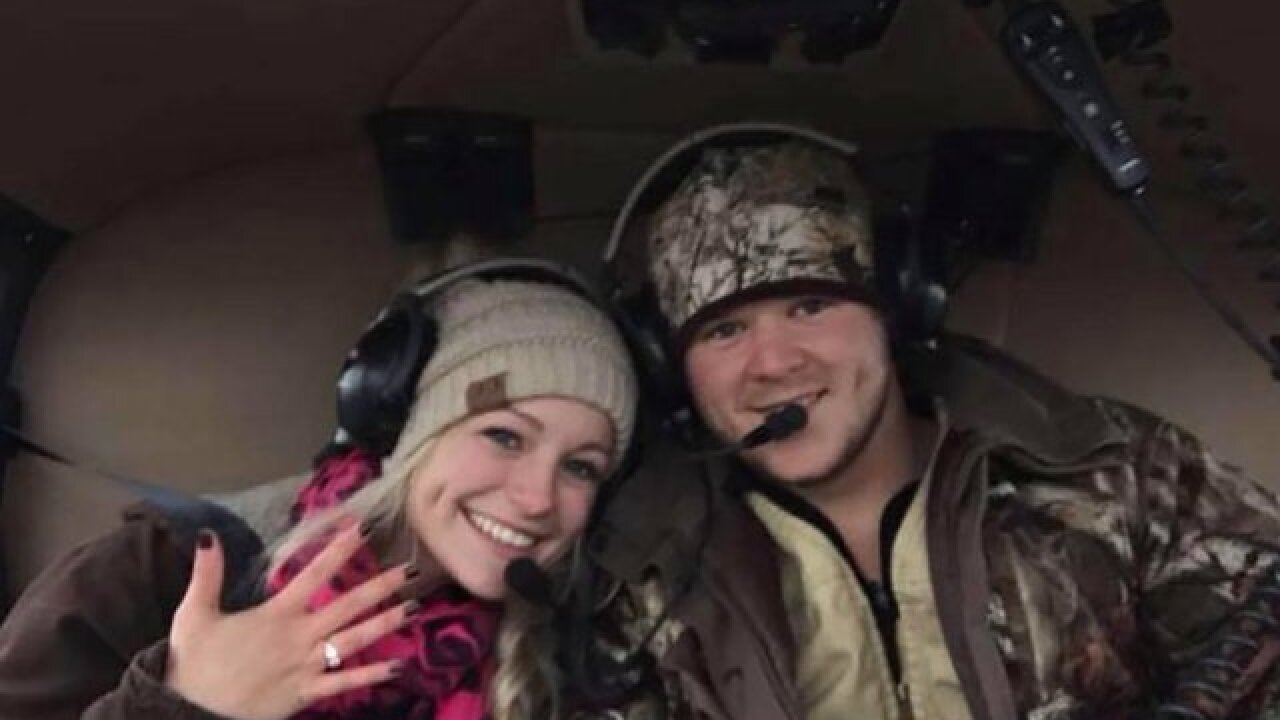 © 2018 Cable News Network, Inc.
From Facebook
<p>Will Byler and Bailee Ackerman Byler were both seniors at Sam Houston State University and news of their deaths was first reported by the university's independent student newspaper -- The Houstonian.</p>

Recovering the wreckage of a helicopter that crashed, killing a newlywed couple and their pilot Saturday, "is going to be difficult" because of the rough Texas terrain, authorities said.

Will Byler and Bailee Ackerman Byler, who married Saturday evening at the Byler family ranch in Uvalde, had just exchanged vows and were en route to their honeymoon about 100 miles east in San Antonio when their helicopter crashed into a mountain, game warden Rachel Kellner of the Texas Parks and Wildlife Department said.

They were seniors at Sam Houston State University.

The pilot was "highly qualified," with 24,000 hours of flying, said Craig Hatch, an air safety investigator with the National Transportation Safety Board, which is investigating. He did not identify the pilot by name.

The helicopter crashed about five to 10 minutes after it took off -- as the newlyweds' friends and family looked on -- and left a trail of wreckage nearly 100 yards long, Hatch said.

An emergency locator transmitter was spotted at the crash site, but it's not clear whether it had been activated or whether a mayday was called in before the crash, Hatch said.

There was no fire at the crash site, which smelled of fuel, he said.

"Getting back there with a trailer and truck and people to lift the helicopter is going to be difficult," Hatch said during a Monday news conference, adding that the nearest state road is at least 4 miles away.

The Bylers' relatives managed to reach the wreckage in a private helicopter before rescue crews, which couldn't get there overnight because of the difficult terrain and "pitch dark" conditions, Kellner said. Authorities were notified just after midnight Saturday, she said.

Rescue crews set off at daybreak Sunday and crossed four ranches to get there, Gazaway said.

University reacts to the students' death

News of the deaths was first reported by the SHSU's independent student newspaper, The Houstonian.

"It is with deepest sadness that we announce the tragic passing of two Bearkats, Will Byler (Agriculture Engineering senior) and Bailee Ackerman Byler (Agricultural Communication senior) in a helicopter accident departing their wedding," the Houstonian posted on Facebook on Sunday evening.

"We ask that you keep the Byler and Ackerman families in your thoughts and prayers,"

"These two individuals made a huge impact and will be remembered by their kind hearts and uplifting spirits," SHSU Student Government Association President David Eller said in a statement Monday. "By serving in their communities and at the Sam Houston State University on the SHSU Rodeo Team and in various student organizations, Will and Bailee exemplified the university motto, 'The Measure of a Life is its Service.'"

The team said it was joining its "extended rodeo family at Sam Houston State University and the entire NIRA Southern Region, as we all deeply grieve the loss of Will Byler & Bailee Ackerman Byler."

"We are a close-knit extended family and our hearts ache extensively for each and every family member, friend, loved one, teammate & acquaintance these tremendous individuals touched," the post read.

Flight for pilot was 'routine'

The pilot's family said he had married in April and was expecting a second grandchild on Monday, CNN affiliate KSAT reported.

Lawrence was a captain in the army and fought in Vietnam, his stepdaughter, Amilyn Willard, told the station.

Willard said "the flight path was routine for her stepdad and he had flown it many times," station reporter Charly Edsitty tweeted. "The family is in shock over the accident and knew something was wrong when they didn't hear from anyone hours later."