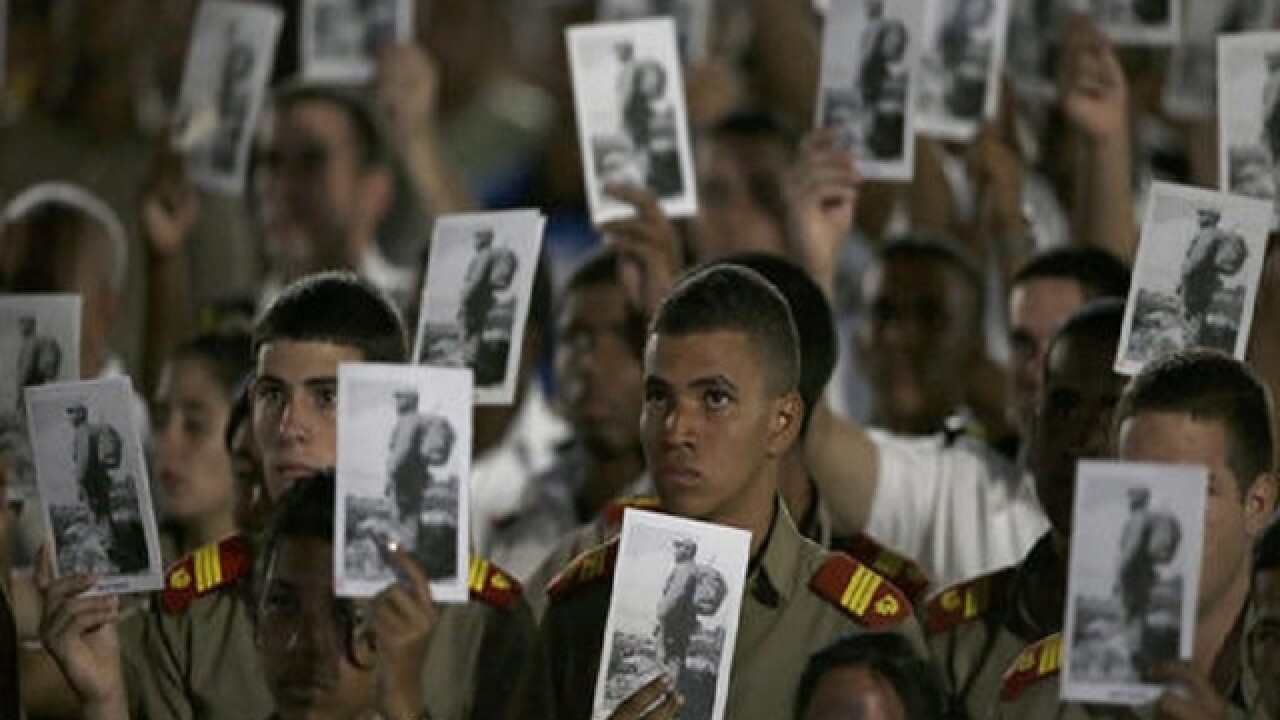 HAVANA (AP) — Regional leaders and tens of thousands of Cubans jammed the Plaza of the Revolution on Tuesday night, celebrating Fidel Castro on the spot where he delivered fiery speeches to mammoth crowds in the years after he seized power.
The presidents of Mexico, Ecuador, Bolivia, Venezuela and South Africa, along with leaders of a host of smaller nations, offered speeches paying tribute to Castro, who died Friday night at 90.
South African President Jacob Zuma praised Cuba under Castro for its record on education and health care and its support for African independence struggles.
Castro will be remembered as "a great fighter for the idea that the poor have a right to live with dignity," Zuma told the crowd.
The rally began with black-and-white revolution-era footage of Castro and other guerrillas on a big screen and the playing of the Cuban national anthem. Castro's younger brother and successor, President Raul Castro, saluted.
Raul Castro closed the rally with a speech thanking world leaders for their words of praise for his brother, who he called the leader of a revolution "for the humble, and by the humble."
Cuban state media reported that an urn containing Fidel Castro's ashes was being kept in a room at the Defense Ministry where Raul and top Communist Party officials paid tribute the previous evening.
During the day, lines stretched for hours outside the Plaza of the Revolution, the heart of government power. In Havana and across the island, people signed condolence books and an oath of loyalty to Castro's sweeping May 2000 proclamation of the Cuban revolution as an unending battle for socialism, nationalism and an outsize role for the island on the world stage.
"I feel a deep sadness, but immense pride in having had him near," said Ana Beatriz Perez, a 50-year-old medical researcher who was advancing in the slow-moving line with the help of crutches. "His physical departure gives us strength to continue advancing in his ideology. This isn't going away, because we are millions."
"His death is another revolution," said her husband, Fidel Diaz, who predicted that it will prompt many to "rediscover the ideas of the commander for the new generations."
Tribute sites were set up in hundreds of places across the island as the government urged Cubans to reaffirm their belief in a socialist, single-party system that in recent years has struggled to maintain the fervor that was widespread at the triumph of the 1959 revolution.
Many mourners came on their own accord, but thousands were sent in groups by the communist government, which still employs about 80 percent of the working people in Cuba despite the growth of the private sector under Raul.
Inside the memorial, thousands walked through three rooms with near-identical displays featuring the 1962 Alberto Korda photograph of the young Castro in the Sierra Maestra mountains, bouquets of white flowers and an array of Castro's medals against a black backdrop, framed by honor guards of soldiers and children in school uniforms. The ashes of the 90-year-old former president did not appear to be on display.
Signs read: "The Cuban Communist Party is the only legitimate heir of the legacy and authority of the commander in chief of the Cuban Revolution, comrade Fidel Castro."
"Goodbye commander. Your ideas remain here with us," 64-year-old retiree Etelbina Perez said between sobs, dabbing at her eyes with a brown handkerchief. "I feel great pain over his death. I owe my entire life to him. He brought me out of the mountains. I was able to study thanks to him."
The scene was played out on a smaller scale at countless places across the country.
After 10 years of leadership by Raul Castro, a relatively camera-shy and low-key successor, Cuba has found itself riveted once again by the words and images of the man who dominated the lives of generations. Since his death on Friday night, state-run newspapers, television and radio have run wall-to-wall tributes to Fidel Castro, broadcasting non-stop footage of his speeches, interviews and foreign trips, interspersed with adulatory remembrances by prominent Cubans.
Copyright 2016 The Associated Press. All rights reserved. This material may not be published, broadcast, rewritten or redistributed.