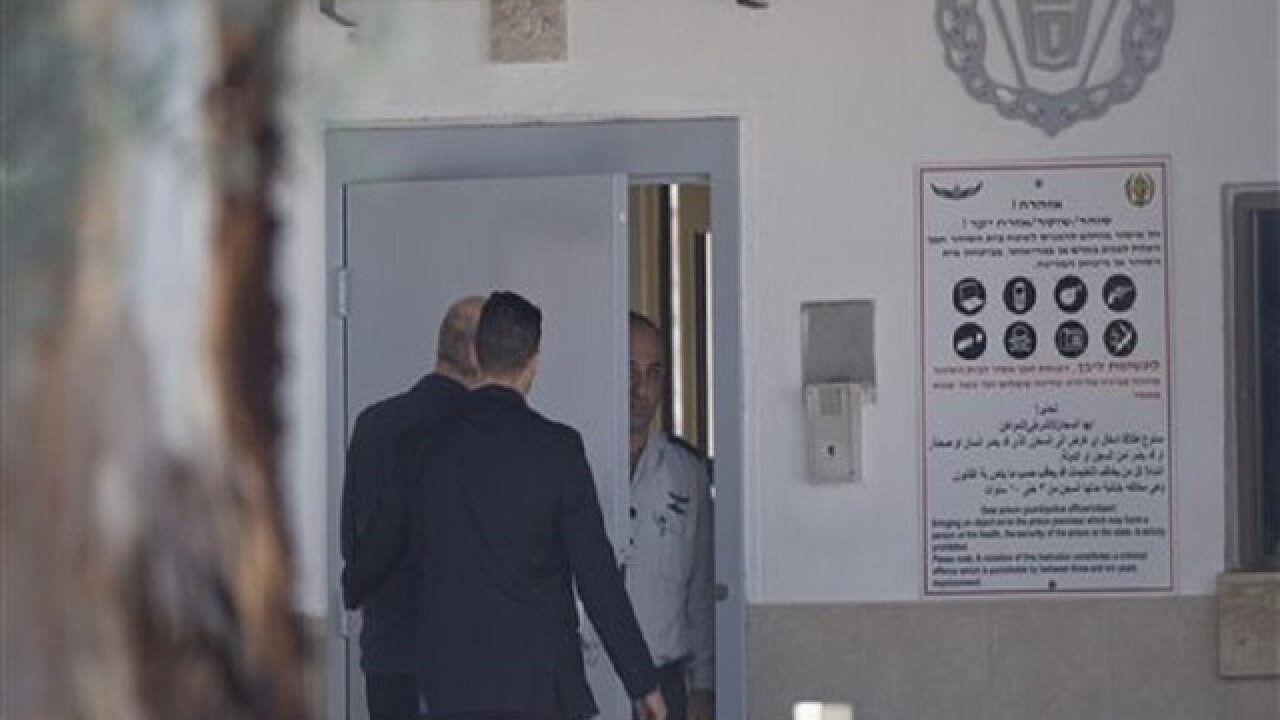 JERUSALEM (AP) — Former Prime Minister Ehud Olmert on Monday began a 19-month prison sentence for bribery and obstruction of justice, defiantly proclaiming his innocence in a farewell video as he became the first Israeli premier to be placed behind bars.
His imprisonment capped a stunning fall from grace that ended Israel's last serious round of peace efforts with the Palestinians and ushered in the era of Benjamin Netanyahu, a hardliner widely criticized in the region and around the world.
Olmert checked into the Maasiyahu prison in central Israel early Monday, hours after releasing the three and a half-minute video. It shows a sullen and weary-looking Olmert alluding to his peace efforts with the Palestinians, expressing "pride and satisfaction" with his political career and acknowledging he made mistakes.
"You can imagine how this change is painful and strange for me, for my family, my loved ones and supporters," he said. "It is important for me to say again, as I said inside the court and outside it, that I absolutely reject outright all the corruption allegations against me."
Olmert is being held in "Wing 10," a special unit known as the VIP section because it houses people who cannot be held with the general prison population for security reasons. He becomes the fifth prisoner in the ward, built to hold 18 people.
Israel's prison service said the wing has six cells — each with three beds — as well as a toilet, shower, cupboard, table, chairs and TV. There are public phones, exercise equipment, a library, a dining room and a yard.
It said Olmert could bring a small set of personal belongings, including four pairs of underwear, four pairs of socks, two towels, a pair of tracksuits, two sheets, a blanket and a pillow cover, and a toothbrush, toothpaste and soap. He can bring nearly $400 for commissary purchases.
He will wake up at 5 a.m. and be subject to a morning headcount before breakfast. The daily routine includes additional headcounts, cleaning and nightly activities before lights go out at 11 p.m.
Olmert was a longtime fixture in Israel's hawkish right wing when he began taking a dramatically more conciliatory line toward the Palestinians as deputy prime minister a decade ago. He played a leading role in Israel's withdrawal from the Gaza Strip in 2005.
He became prime minister in January 2006 after then-Prime Minister Ariel Sharon suffered a debilitating stroke. He subsequently led their newly formed Kadima Party to victory in parliamentary elections on a platform of pushing further peace moves with the Palestinians.
A gifted orator, Olmert broke a series of taboos while in office — warning that Israel could become like apartheid South Africa if it continued its occupation of the Palestinians and expressing readiness to relinquish parts of the holy city of Jerusalem under a peace deal.
He led his government to the Annapolis peace conference in November 2007 — launching more than a year of ambitious, but ultimately unsuccessful U.S.-brokered peace talks. Olmert enjoyed a warm relationship with then-President George W. Bush.
Olmert has said he made unprecedented concessions to the Palestinians — including a near-total withdrawal from the West Bank and an offer to place Jerusalem's Old City under international control — and was close to reaching an agreement at the time of his resignation.
In a documentary released last fall, Palestinian President Mahmoud Abbas confirmed Olmert's offer. But he said the Israeli leader pressured him to sign the deal without allowing him to study a proposed map, and that the offer did not adequately resolve the fate of millions of Palestinian refugees.
Still, he described the talks as serious and estimated a deal could have been wrapped up in "four to five months" had Olmert not been engulfed in his legal problems.
Olmert's departure cleared the way for the election of Netanyahu in early 2009, and subsequent Mideast peace efforts have floundered.
Netanyahu rejects Olmert's territorial concessions, and with gaps so wide, the Palestinians say there is no point in resuming talks. Netanyahu's hard-line positions have also strained relations with Israel's closest allies, the U.S. and European states.
In Monday's video, Olmert said that no one is above the law, but also suggested he was the victim of political persecution, saying it was possible "that the legal snowball into my affairs got bigger from an array of other reasons that are not just legal." He expressed hope the public would over time view him in a more "balanced" way.
"I hope that then many will recognize that during my term as prime minister, honest and promising attempts were made to create an opening for hope and a better future of peace, happiness and well-being," he said.
Olmert, 70, was convicted in March 2014 in a wide-ranging case that accused him of accepting bribes to promote a controversial real-estate project in Jerusalem. The charges pertained to a period when he was mayor of Jerusalem and trade minister, years before he became prime minister in 2006, a point he reiterated in his video statement.
He was initially sentenced to six years, but Israel's Supreme Court later reduced the sentence to 18 months. That was extended by a month earlier this year because Olmert pressured a confidant not to testify in multiple legal cases against him.
Israel has sent other senior officials to prison, including Moshe Katsav, who held the largely ceremonial post of president and is serving a seven-year prison term for rape. But having the once popular Olmert behind bars was met with mixed emotions by many Israelis.
"When you look at a person like this, who is the salt of the earth, who is so talented, who is so charming, who is so capable, the fact that he is going to prison is something sad," Dan Margalit, a columnist with the daily Israel Hayom and a former Olmert confidant, told Israeli Army Radio.
Associated Press 2016