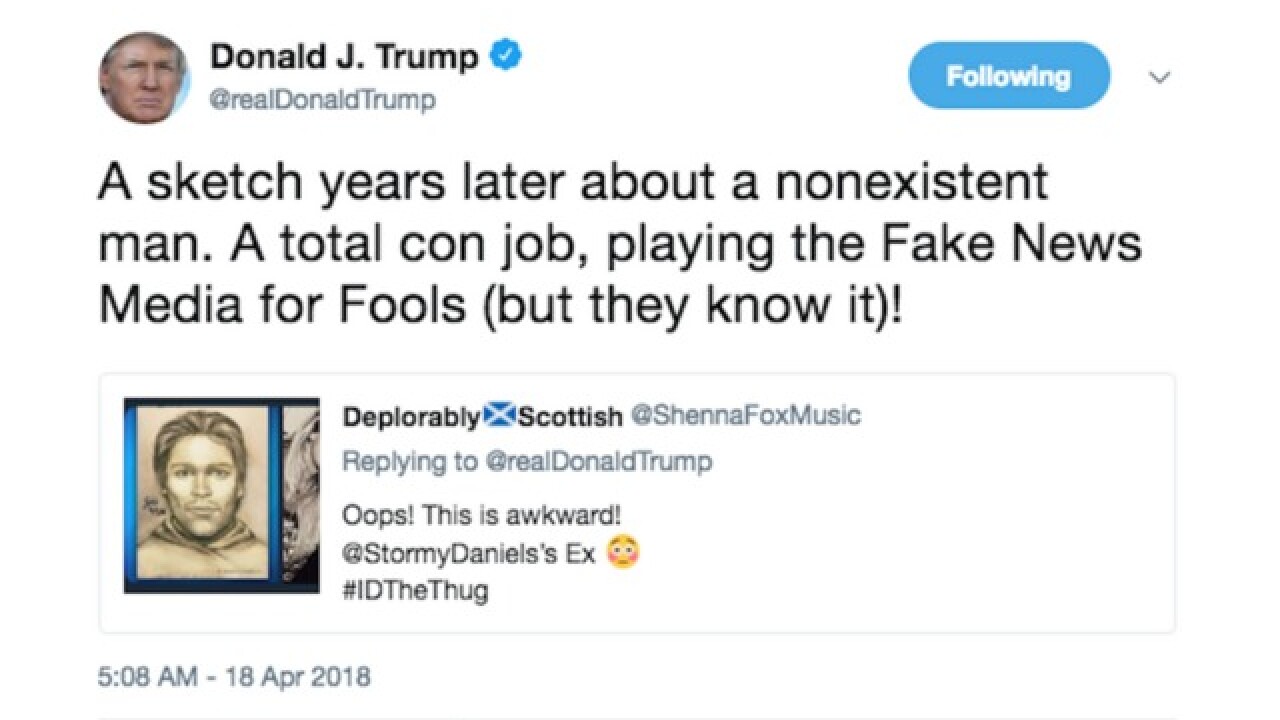 President Donald Trump dismissed on Wednesday the newly-released composite sketch of a man who adult film star Stormy Daniels says threatened her over her alleged affair with Trump more than a decade ago.

"A sketch years later about a nonexistent man," he tweeted. "A total con job, playing the Fake News Media for Fools (but they know it)!" Trump's tweet quotes another Twitter user that includes a photo of a man who is purportedly Daniels' ex-partner who the user suggests resembles the figure in the sketch.

Trump's message came along with a retweet of Twitter user @ShennaFoxMusic, who tweeted at the President a side-by-side photo of the composite sketch and a photo of Daniels and her partner Glendon Crain (his given name is Bendon Miller).

A sketch years later about a nonexistent man. A total con job, playing the Fake News Media for Fools (but they know it)! https://t.co/9Is7mHBFda

The photo tweeted by @ShennaFoxMusic was taken from Daniels' Instagram page, which was posted on February 5. As of late March, Daniels and Crain were still together, according to Bustle.

The tweet marks the first time Trump has commented about the matter on Twitter, though he didn't explicitly refer to Daniels. He broke his months-long silence about her allegations earlier this month when he told reporters on Air Force One he didn't know about a $130,000 payment made by his lawyer, Michael Cohen, to the adult film actress shortly before the 2016 election.

Soon after the President's response to the sketch Wednesday morning, Daniels' lawyer, Michael Avenatti, suggested new claims, like defamation, could be pursued.

"In my experience, there is nothing better in litigation than having a completely unhinged, undisciplined opponent who is prone to shooting himself in the foot. Always leads to BIGLY problems...like new claims (i.e. defamation). LOL," he tweeted.

CNN has reported that Trump's advisers have encouraged him to avoid inflaming the issue by addressing it publicly, even as the President has been itching to defend himself. The White House has said Trump denies the affair allegation.

The sketch reveal and a $100,000 reward leading to his identification were announced by Daniels and Avenatti on ABC's "The View" on Tuesday morning. On CNN Tuesday evening, Avenatti raised the reward to $131,000.

Daniels says the alleged threat took place in 2011, shortly after she had agreed in May of that year to sell her story about the Trump affair to a magazine for $15,000. In a previous interview with Anderson Cooper on CBS's "60 Minutes," Daniels said she was in a Las Vegas parking lot preparing to head into a fitness class when a man approached her and her infant daughter.

"A guy walked up on me and said to me, 'Leave Trump alone. Forget the story,'" Daniels told "60 Minutes." "And then he leaned around and looked at my daughter and said, 'That's a beautiful little girl. It'd be a shame if something happened to her mom.' And then he was gone."