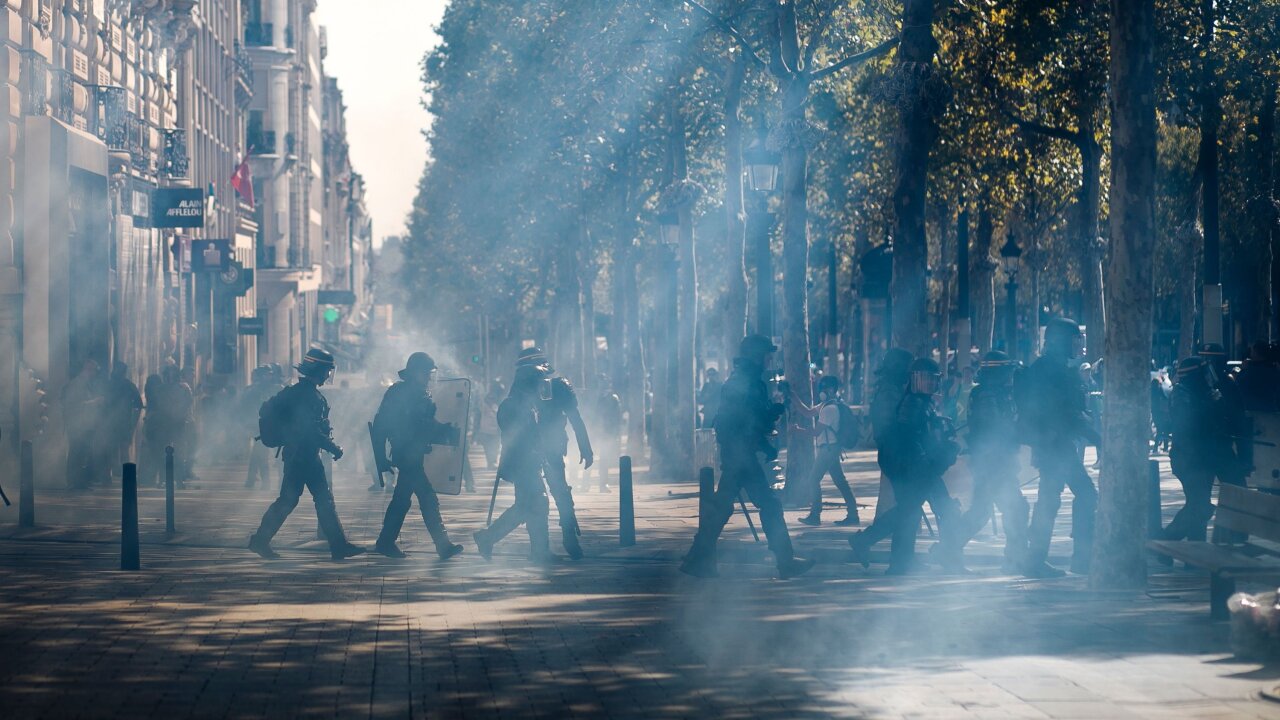 (CNN) -- Violent clashes broke out between riot police and protesters in Paris on Saturday, after "gilets jaunes," or yellow vest protesters, as well as anti-capitalist activists joined a climate change demonstration.

Police used tear gas, shields and truncheons as they pushed back the protest, which included Black Bloc activists -- anti-capitalist protesters dressed in black, some with their faces covered by masks -- and some gilets jaunes in addition to environmental activists.

Riot police hit protesters with truncheons, while a pile of burning motorcycles billowed plumes of black smoke into the sky. A bank and an estate agent had their front windows smashed.

The "March for Climate" protest was organised by NGOs and Greenpeace. In a tweet following the clashes between police and demonstrators, Greenpeace France asked climate change protesters to leave as "conditions for a non-violent march are not met."

Earlier on Saturday, a large police presence was deployed to disperse the gilets jaunes from the Champs-Élysées, the luxury shopping street in central Paris.

Small confrontations broke out between police and protesters, with officers firing tear gas at the demonstrators.

The Paris Police Prefecture said about 7,500 officers had been deployed in the French capital. Police said they had questioned more than 100 people as of 1 p.m. Paris time (7 a.m. ET).

The Champs-Élysées, popular with tourists and Parisians alike, has been a focal point for the gilets jaunes since the movement against President Emmanuel Macron's proposed economic reforms began. The protests, now in their 45th week, have proven an enduring challenge to Macron's presidency.

On Wednesday, local authorities issued a decree forbidding the gilets jaunes from gathering on the Champs-Élysées at the weekend.

Paris Police Commissioner Didier Lallement told reporters the police contingent deployed on Saturday would match that of May 1, which saw violent scenes and scores of demonstrators gathered en masse. He said on Friday: "Tomorrow, there will be people who will want revenge... I want to tell them that we will be there."