PETA says these phrases are comparable to racism and homophobia 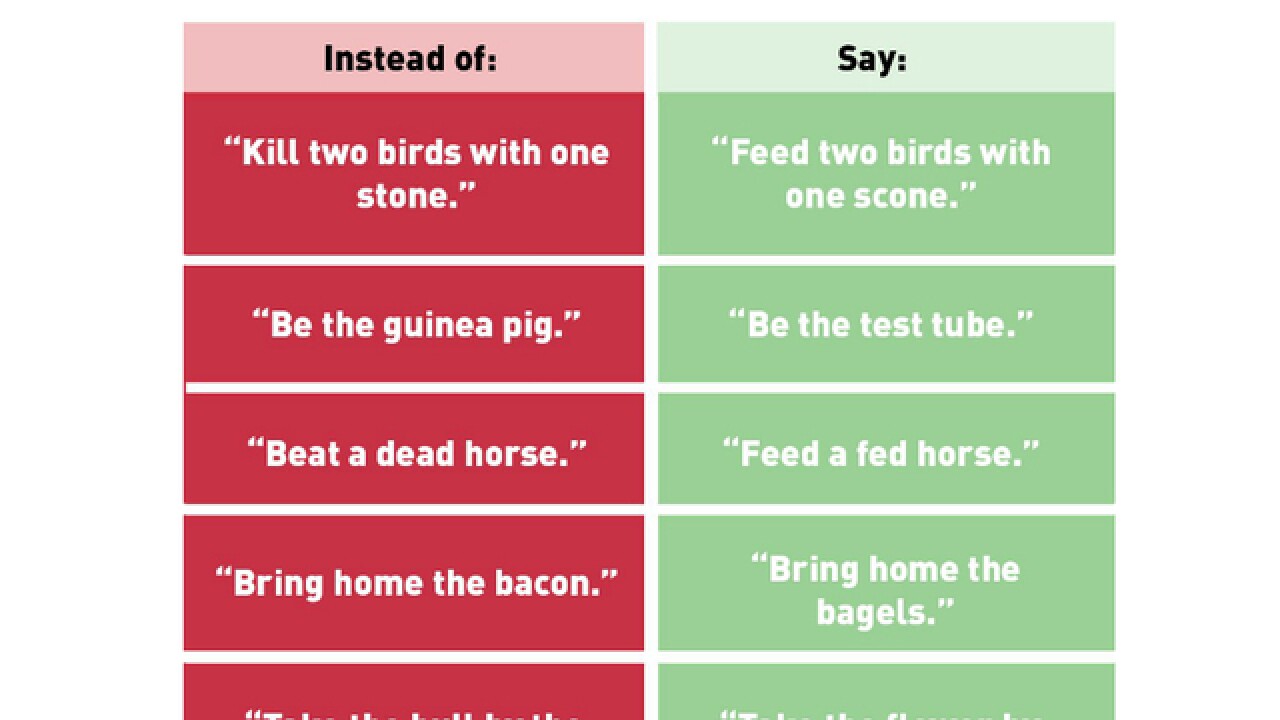 Copyright 2018 Scripps Media, Inc. All rights reserved. This material may not be published, broadcast, rewritten, or redistributed.
PETA/Twitter
<p>Meat-based idioms, like "flogging a dead horse" or "taking the bull by the horns," can be compared with homophobic and racist language, according to animal rights organization PETA.</p>

Meat-based idioms, like "flogging a dead horse" or "taking the bull by the horns," can be compared with homophobic and racist language, according to animal rights organization PETA.

"Just as it became unacceptable to use racist, homophobic, or ableist language, phrases that trivialize cruelty to animals will vanish as more people begin to appreciate animals for who they are and start 'bringing home the bagels' instead of the bacon," PETA said on Twitter.

The group took to Twitter Tuesday, offering a graphic showing some possible alternatives to meat-related expressions.

"Words matter, and as our understanding of social justice evolves, our language evolves along with it," it added.

The comparison with racism and homophobia was met with anger on Twitter, with some arguing that PETA was trivializing race and gender issues.

Others said the animal rights organization was giving vegetarians and vegans a bad name.

PETA's tweet comes after a UK-based academic argued last month that an increased awareness of vegan issues may lead to new modes of expression.

"Metaphors involving meat could gain an increased intensity if the killing of animals for food becomes less socially acceptable," Shareena Z. Hamzah of Swansea University wrote in the Conversation.

"If veganism forces us to confront the realities of food's origins, then this increased awareness will undoubtedly be reflected in our language and our literature."

The legal system is already getting to grips with the subject. It was announced this week that a British employment tribunal will decide whether ethical veganism is a "philosophical belief" that should be afforded the same protections as religion.

Words matter, and as our understanding of social justice evolves, our language evolves along with it. Here’s how to remove speciesism from your daily conversations. pic.twitter.com/o67EbBA7H4