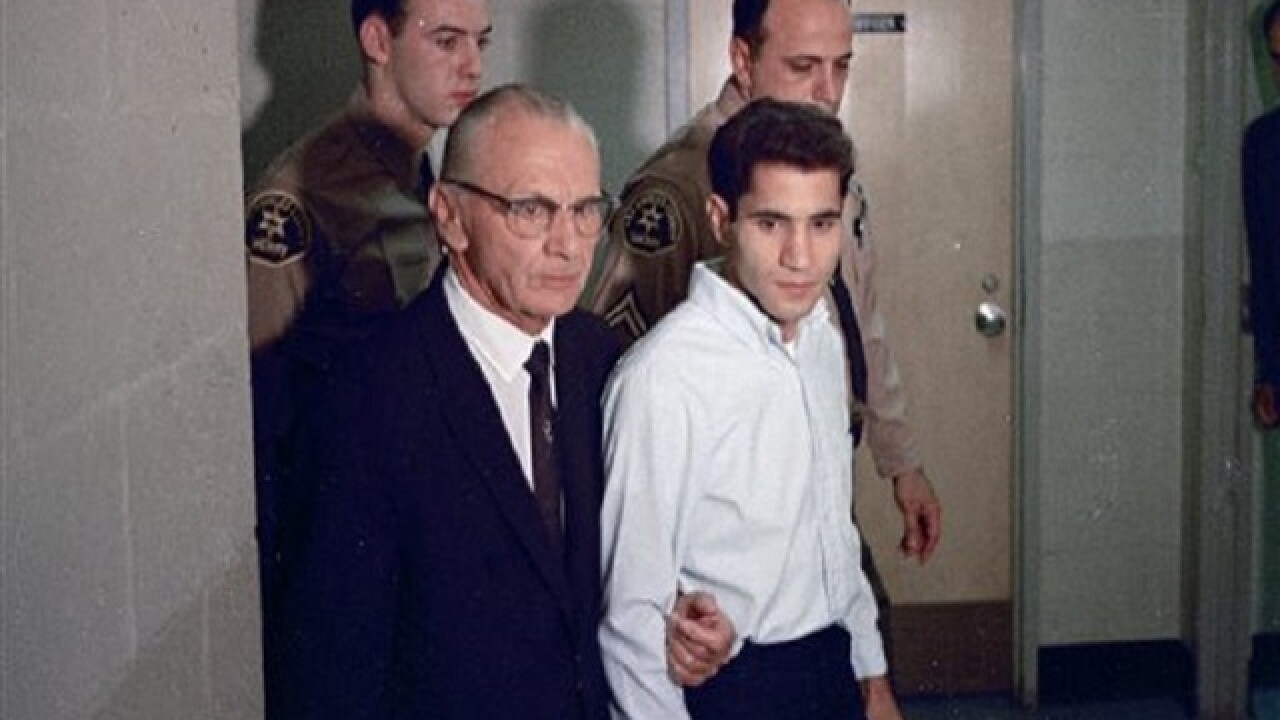 The Jerusalem native, now 71, has given no inkling that he will change his version of events at his 15th parole hearing on Wednesday in San Diego. He is serving a life sentence that was commuted from death when the California Supreme Court briefly outlawed capital punishment in 1972.

During his previous parole hearing in 2011, Sirhan told officials about his regret but again said he could not remember the events of June 5, 1968. The parole board ruled that Sirhan hadn't shown sufficient remorse and didn't understand the enormity of the crime less than five years after the killing of President John F. Kennedy — the senator's older brother — and two months after the assassination of Martin Luther King Jr.

His memory will be tested this time in front of Paul Schrade, 91, a Kennedy confidante who was one of five people injured in the shooting. Schrade will appear for the first time at a Sirhan parole hearing.

Schrade, who declined in a brief interview to preview his planned remarks to the parole board, has steadfastly advanced the view that there was more than one gunman.

Sirhan initially refused to appear at the parole hearing at the Richard J. Donovan Correctional Facility, where he has been held since 2013, said Laurie Dusek one of his attorneys. Memories of the 2011 hearing made him physically ill, but Sirhan relented after Dusek begged him to come and said Schrade would be there.

Sirhan, who skipped earlier parole hearings, sent word through his brother, Munir, that he would appear, but Dusek said she didn't know what he will say, if anything.

"If you don't show, you've got nothing to gain," Dusek said she wrote to Sirhan.

Schrade, who was western regional director of the United Auto Workers Union when he was shot in the head, was labor chair of Kennedy's presidential campaign and was at the senator's side the night he was gunned down moments after delivering a victory speech in California's pivotal Democratic primary.

Schrade has devoted the second half of his life to preserving Kennedy's legacy and trying to unravel questions surrounding the assassination. He proposed the Robert F. Kennedy Community Schools at the site of the former Ambassador Hotel and has a library named for him there.

Schrade, who has kept a low profile in recent years, "is a family friend of the Kennedy's, he's very much in touch with the senator's children," Dusek said. "He feels that justice has not been served."

Author Dan Moldea said Schrade was instrumental in arranging 14 hours of interviews with Sirhan for Moldea's 1995 book, "The Killing of Robert F. Kennedy," which concluded Sirhan acted alone. Moldea began his research believing there was more than one gunman.

"Paul is a great man of honorable intentions at all times, but Paul has grabbed at every thread of conspiracy in this case," Moldea said. "When I concluded that Sirhan did it and did it alone, basically Paul cut me out of his life."

Sirhan's lack of memory of the attack makes expressions of remorse and accepting responsibility difficult.

In one of many emotional outbursts during his 1969 trial, he blurted out that he had committed the crime "with 20 years of malice aforethought."

That and his declaration when arrested, "I did it for my country," were his only relevant comments before he said he didn't remember shooting Kennedy.

Last year, a federal judge in Los Angeles rejected arguments by Sirhan's lawyers that their client was not in position to fire the fatal shot and that a second shooter may have been responsible.

Some claim 13 shots were fired while Sirhan's gun held only eight bullets, and that the fatal shot appeared to come from behind Kennedy while Sirhan faced him.