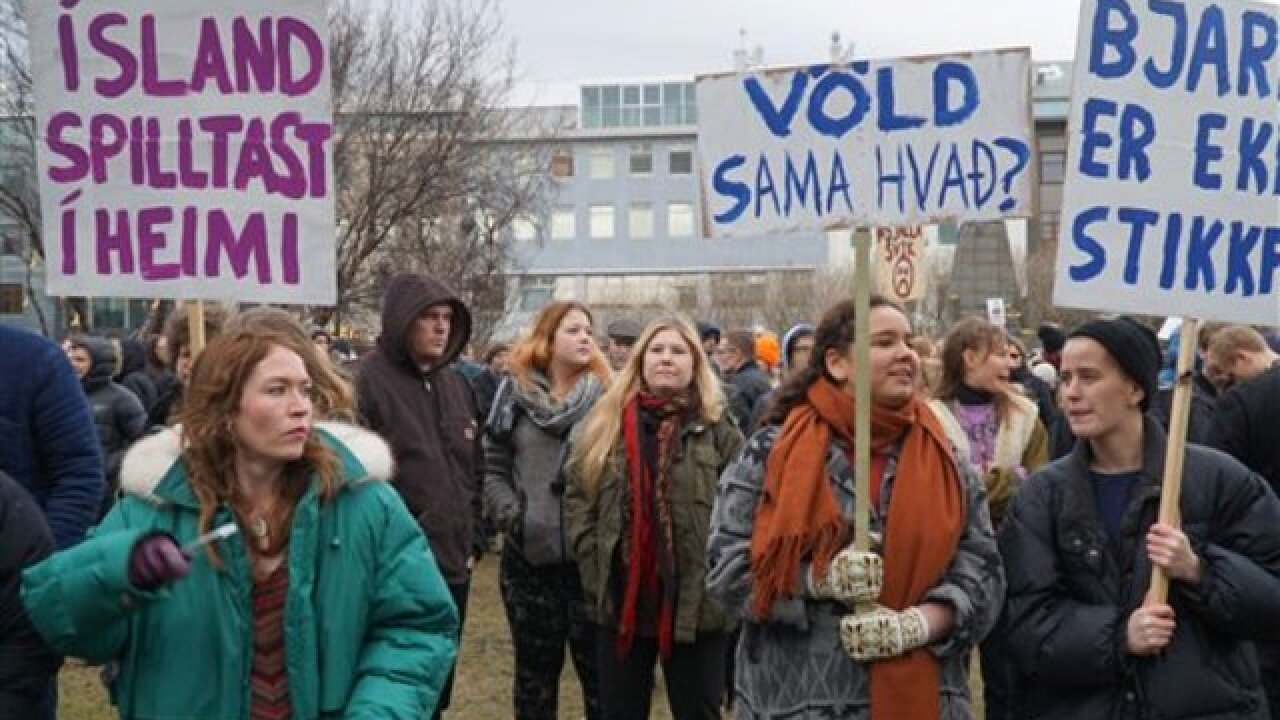 David Keyton
<p>People hold banners and protest in front of Parliament building in Reykjavik, Iceland, Tuesday April 5, 2016. The leak of millions of records on offshore accounts claims its first high-profile victim as Iceland's prime minister Sigmundur David Gunnlaugsson resigns amid outrage over revelations he used such a shell company to conceal a conflict of interest. (AP Photo/David Keyton)</p>

By: Associated Press
Posted at 10:47 PM, Apr 05, 2016
AUSTIN, Texas (AP) — The Panama Papers, which illustrate how a small class of global elites find elaborate ways to shield their wealth from tax collectors, bank regulators and police, offer a glimpse into what's driving the populist outrage that has marked this year's presidential campaign.
The trove of 11.5 million leaked documents have thus far shed light mostly on foreign figures such as the prime minister of Iceland, who resigned Tuesday after the public learned that he used a shell company to shelter large sums of money while his country's economy foundered.
The reaction in the U.S., meanwhile, has been relatively muted. But voters and experts say the documents validate the frustration felt by Bernie Sanders supporters on the left, who feel hard work is no longer enough to get ahead in America, and the anger of Donald Trump partisans on the right who say it will take someone who knows the insider system to dismantle it.
"We've recently heard the startling revelations about the tax dodge that is taking place in Panama," Sanders told supporters in Wyoming Tuesday night after his win in the Wisconsin Democratic primary. "In a time of massive income and wealth inequality, how does it happen that you have large, profitable multinational corporations who in a given year pay zero, not a penny, in federal income taxes?"
Retired Wisconsin high school teacher Steve Nibbe, who was voting for the Vermont senator in Tuesday's primary, said word of the documents made him "sit up and take notice." But he said he was not shocked.
"It just seems that those who have wealth — and sometimes that comes with privilege — are able to do things that other people are not," said Nibbe, 60, from Verona, outside the state capital of Madison.
Joe Brettell, a Republican strategist based in Houston, doubted whether the public's fury could get much worse.
"The populist anger being fueled primarily by white working-class Americans didn't need any more fuel," Brettell said. "They've already lived through the financial meltdown. They've already lived through the lack of middle class wage increases even as the stock market boomed."
The passports of at least 200 Americans are included in the documents, according to news organizations that have access to them, though none are thought to be as famous as celebrities and politicians from other countries, such as Russian President Vladimir Putin and Argentine soccer star Lionel Messi.
In all, 12 current or former heads of state are included in the legal records from Panama's Mossack Fonseca law firm. They were first leaked Sunday to the Sueddeutsche Zeitung newspaper based in Munich, Germany.
Charles Postel, a history professor at San Francisco State University who has studied American populism and wrote a book titled "The Populist Vision," said of Sanders, "This is just the type of thing that is animating his base."
He described Trump as "more of a nationalist."
"His issue is not that these rich people are not playing by the rules. It's that we need powerful people who will protect Americans," Postel said. "That's a different thing that provokes outrage."
The New York billionaire might even actually win points with supporters if he were among the rich and famous mentioned in the documents, Postel said.
"If Trump said, 'Of course I put half of my money in the Virgin Islands,' none of his voters would object to that," Postel said. "They'd say: 'Sure, he's a billionaire. If I was a billionaire, I wouldn't pay my taxes either.'"
That was a sentiment echoed somewhat by 24-year-old factory worker Demetrius Rimmer of Milwaukee, who had not heard about the scandal before a reporter mentioned it. But he was none too impressed: "It's always about money."
Rimmer voted for Sanders.
If the papers become more of a presidential issue, it won't be confined to the Trump or Sanders camp.
"Both sides do it," said Mike Feiler, a 52-year-old auto dealer in Verona who said he voted for Texas Sen. Ted Cruz in the primary. "Both sides try to hide their money."
Associated Press 2016