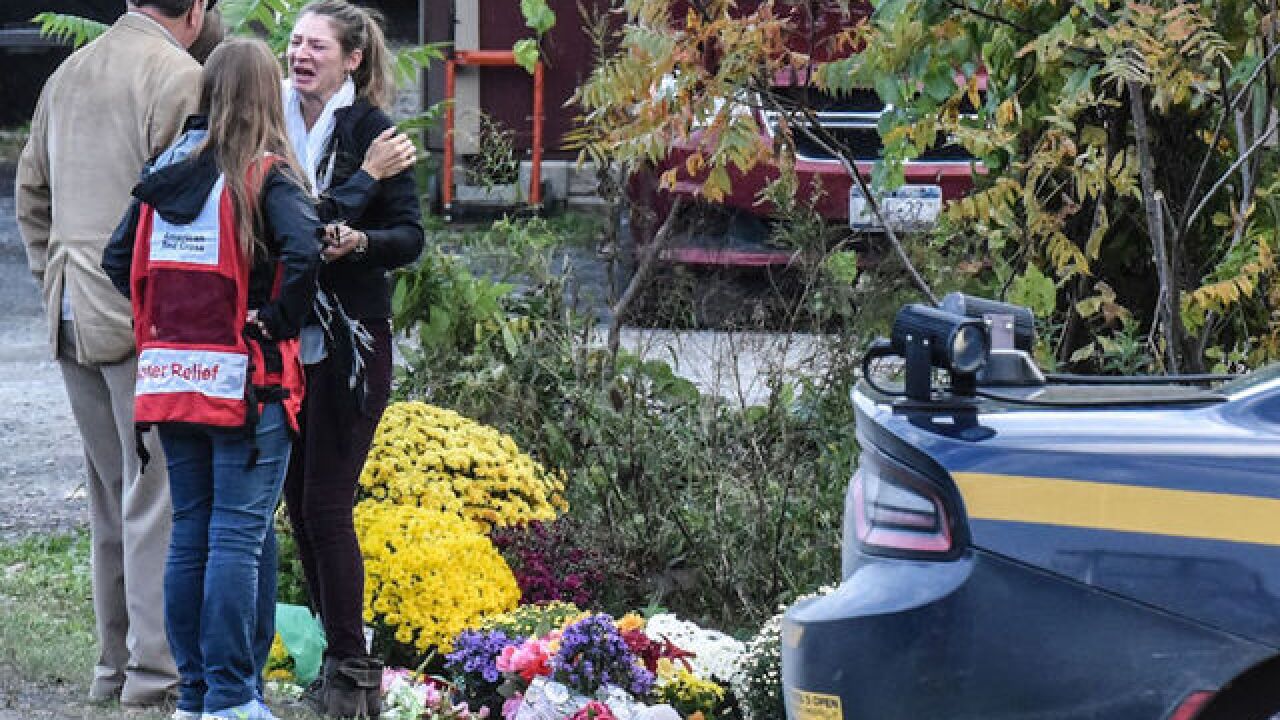 Image copyright 2018 Getty Images. All rights reserved. This material may not be published, broadcast, rewritten, or redistributed.
Stephanie Keith
<p>People mourn at the site of the fatal limousine crash on October 8, 2018 in Schoharie, New York. </p>

Police arrested a limousine company owner's son Wednesday in connection with the weekend crash in Schoharie that killed 20 people, according to the company's lawyer.

Nauman Hussain, whose father, Shahed, owns Prestige Limousine Chauffeur Service, was arrested during a traffic stop on Interstate 787, according to New York State Police. Nauman Hussain is an "operator" for Prestige, police said.

Charges are pending for Nauman Hussain, the state police said.

Officer Kerra Burns, a state police spokeswoman, declined to say whether the arrest was related to the crash, but Lee Kindlon, who is representing Prestige, told CNN it was connected to the Saturday accident.

The arrest came as state officials and Kindlon offered conflicting accounts on whether the stretch Ford Excursion should have been on New York's roads when it crashed in Schoharie, killing 20 people.

Gov. Andrew Cuomo flatly stated this week that the vehicle failed a state inspection, meaning it shouldn't have been in service, and that the driver did not have a proper license to operate the vehicle. Attorney Lee Kindlon says neither claim is true.

For its part, the state Department of Transportation concurs with Cuomo, and federal records from a September inspection indicate the automobile was deemed unfit to drive.

Kindlon said the state Department of Transportation conducted a periodic inspection last week and found minor infractions, including a broken window latch and faulty windshield wipers, but the issues were fixed. The DOT ruled the limo "roadworthy" last week, he said.

"I respectfully disagree with Gov. Cuomo. I would just ask for the investigation to take place so we can figure out exactly why the vehicle crashed," Kindlon said, adding that no recent failure or minor safety issues led to the crash.

State DOT spokesman Joe Morrissey, however, called the assertion that the limo had been cleared to be on the road "categorically false."

Kindlon also contends that the driver -- Scott Lisinicchia, 53, of Lake George -- was properly licensed, and that Prestige had checked multiple times with the the state Department of Motor Vehicles, which confirmed Lisinicchia was in compliance.

Lisinicchia, who worked for Prestige as needed, had been with the company for years, the attorney said, and was a "very reliable employee and a great driver."

Investigators have said that determining Lisinicchia's state -- namely, whether he was impaired or fatigued in any way at the time of the crash -- will be integral to their probe.

"He was probably just doing his job and trying to get the people to where they're supposed to go, and taking whatever car that was given to him," he said. "I know that he always kept his license up. ... I know that he always made sure that it was valid and was in order."

The driver's wife, too, says he was an excellent driver. Kim Lisinicchia told CBS that she doesn't understand why there is so much focus on the license "because even if he didn't have the proper license, this still would have happened, and I feel like he still would have got blamed."

She said Prestige "should've been more responsible" when it had people's lives in its hands, according to CBS.

Asked if her husband was aware of problems with the company's vehicles, she provided conflicting answers.

Her husband had complained to her more than once about the vehicles, Kim Lisinicchia told the network, and she once overheard him demand another vehicle, saying, "I'm not going to drive this like this. You need to give me another car." It was not clear when she overheard him say this.

Asked directly if Scott Lisinicchia knew something was wrong with Prestige's vehicles, she said, "Not really. He trusted in what the limo company said -- that the cars were all right."

CNN's attempts to reach Kim Lisinicchia have been unsuccessful. Grant & Longworth, a law firm with which she has consulted, said in a statement the family requests privacy.

"The family believes that unbeknownst to (Scott Lisinicchia), he was provided with a vehicle that was neither roadworthy nor safe for any of its occupants," the statement said, without elaborating.

Prestige is looking into Lisinicchia's history as part of an internal investigation, Kindlon said. It's also collecting maintenance records, driver logs and ownership records, which it will turn over to authorities, he said.

Was the limo roadworthy?

Local, state and federal investigators are still trying to figure out why Lisinicchia plowed the stretch Excursion through a stop sign and into a parked SUV on Saturday.

The crash, which killed Lisinicchia, all 17 passengers inside the limo and two pedestrians, is the deadliest US transportation accident in almost a decade. The limo had been taking its occupants to a birthday party at a brewery in upstate New York.

A focal point of the investigation will deal with the aftermarket modifications involved in converting the Ford SUV into a limousine. Investigators will also home in on the company's history.

Authorities seized three of the company's vehicles, as well as the modified limo involved in the crash, State Police Maj. Robert Patnaude said.

The company underwent five inspections in the last two years and had four vehicles taken out of service in that time, federal records show.

Kindlon says the vehicles taken off the road were sold or transferred, while those with safety or mechanical issues were repaired and returned to the fleet. But records from a September 4 inspection show the Excursion was taken "out of service," meaning it was prohibited from being on the road because it posed a hazard.

Among the problems behind that designation were a lack of or defective emergency exits, seating in excess of the manufacturer's designed capacity and an unspecified violation of the requirement to keep records dealing with inspection, repair and maintenance of parts and accessories, according to the Federal Motor Carrier Safety Administration.

The inspection also yielded seven lesser violations that did not warrant the vehicle being taken off the road. Among them: improper display of the carrier's name and/or federal DOT number, registration or license plate violation, a problem with the hydraulic brakes, inoperable or defective windshield wipers and a failure to repair defects noted in a previous inspection.

Prestige can provide records showing that the entire brake system was replaced in June, Kindlon said.

At least one victim seemed worried about the condition of the limo before the accident, according to text messages obtained by The New York Times. Erin Vertucci McGowan sent a friend a text message complaining about the engine noise, the paper reported.

"When we get to brewery we will all b deaf," she wrote, the Times reported.

The wreck has also placed Prestige Limousine Chauffeur Service and its owner, Shahed Hussain, under scrutiny. He is currently in Pakistan, a destination to which he travels frequently, Kindlon said.

"He is ready and able to come back whenever they need him," the attorney said. "His heart is broken and his family's heart is broken. ... Anything that he can do to make this right, he'll do, and he's so very sorry for everything that's happened."

Before he owned the company, the Pakistani national was an informant for the FBI and conducted an undercover investigation for several months in 2008 and 2009, court records show.

A state official and a former attorney with knowledge of his cooperation confirm Hussain was an informant.

Hussain skirted deportation for a fraud conviction by agreeing to cooperate with an investigation into another person. In 2007, Hussain became a paid informant for the FBI and started working in the lower Hudson Valley, records show. Hussain was charged with finding Muslims who might be plotting against the United States, records show.

Hussain attended services at a mosque in Newburgh at the direction of the FBI in 2008, records show. The FBI equipped him with a home that had concealed audio and video recording equipment, and audio equipment for his car. Hussain presented himself as a wealthy Pakistani immigrant who knew about Islamic teachings.

He testified in at least one federal case, records show.