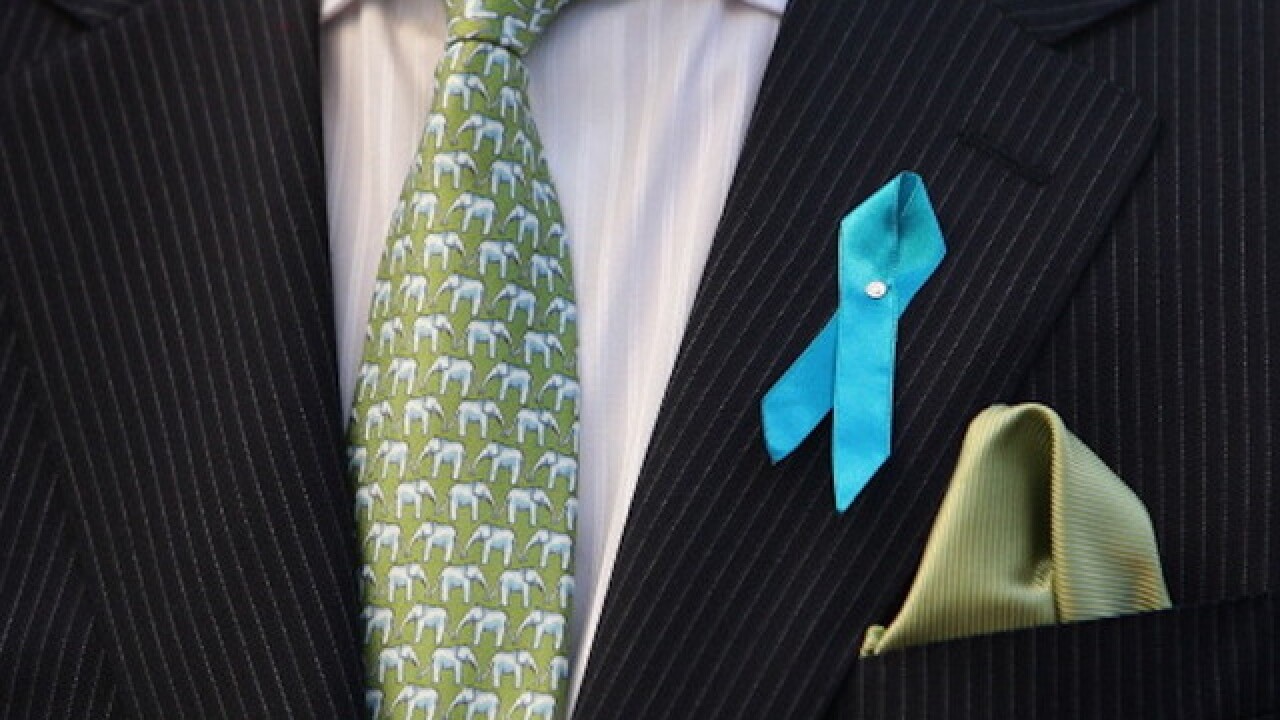 Image copyright 2018 Getty Images. All rights reserved. This material may not be published, broadcast, rewritten, or redistributed.
Lisa Maree Williams
<p>SYDNEY, AUSTRALIA - FEBRUARY 22: A man wears a teal ribbon in honor of women who have lost the battle with ovarian cancer on February 22, 2011 in Sydney, Australia. For the first time the Sydney Opera House was lit teal for the launch of Teal Ribbon Day, to represent women with Ovarian Cancer. (Photo by Lisa Maree Williams/Getty Images)</p>

Immunotherapy has gained ground against a stubborn opponent: ovarian cancer. A personalized cancer vaccine is safe and may lengthen the lives of ovarian cancer patients, a small clinical trial found.

The research, published Wednesday in the journal Science Translational Medicine, showed "significantly higher" overall survival at two years among patients who received the vaccine, compared with patients who did not.

Ovarian cancer is a "silent killer" because often it goes unnoticed until it is diagnosed at a late stage. Treated with surgery followed by chemotherapy, most patients -- 85% -- relapse and ultimately develop resistance to the chemo. At this point, they run out of treatment options.

Still, scientists are hopeful based on the fact that a subset of patients shows an immune response to their cancer. Generally, these patients have better survival rates than those whose immune systems don't react in the same way.

A vaccine, then, might be able to trigger and boost the immune system and increase the survival rates of patients, said Dr. Lana Kandalaft, senior author of the new study and an adjunct assistant professor at the University of Pennsylvania Perelman School of Medicine.

Testing this hypothesis, Kandalaft and her colleagues created "personalized" vaccines for 25 patients diagnosed with advanced recurrent ovarian cancer. The women had recurrent advanced epithelial ovarian cancer, which has an average five-year survival rate of 17%, according to the American Cancer Society.

The scientists made each unique vaccine using a patient's tumor (stored and preserved before surgery) and dendritic cells from her blood.

Within the immune system, dendritic cells act as clever spies. Their mission is to identify foreign invaders lurking in the shadowy interfaces between our bodies and the environment: the lining of our airways, for example, and the surface of our intestines. Once they discover a virus or a dangerous toxin, dendritic cells will capture and display fragments of the invader on their surfaces and then travel deep into the lymph nodes, where the immune system's killer T cells reside.

Here, a simple introduction -- a knowing glance among friends -- takes place. The newly accessorized dendritic cells trigger the T cells to launch an attack in an attempt to destroy the invaders.

For the study, some patients received the personalized vaccine alone, and others received it in combination with either one or two chemo drugs (bevacizumab and cyclophosphamide).

"The patients who received the vaccine mounted an immune response against their own tumors," Kandalaft said in a statement. She described the immune response as "an increased number of T cells which were specific to the tumor and were able to kill tumors."

Each of the 25 patients received, on average, 16 vaccine shots over the course of the study and none experienced severe side effects from the vaccine.

Still, one vaccine-only patient remained in remission for five years after the study; prior to the study, her cancer had recurred twice after chemotherapy.

However, Brawley, who was not involved in the research, remains cautious of this "designer vaccine."

"Survival analysis is prone to some biases, which can mislead even the most experienced of clinical trialists," he said. The public "often wants to pass up better-proven conventional therapy for an unknown in immunotherapy."

Overall, Brawley is hopeful for immunotherapy as a treatment for ovarian cancer. "This methodology has been looked at in prostate cancer and may be useful in other diseases."

Going forward, Kandalaft and her colleagues will be pursuing larger studies of these vaccines. The results of the current study, designed to address safety and funded by National Institutes of Health, were "promising, albeit preliminary," she said.