A man who was riding with his family in a horse-drawn carriage that ran wild on the streets of Oconomowoc, Wisconsin Saturday is speaking out about what he calls the scariest thing he’s ever been through.

The two horses crashed into two cars at an intersection. A total of 15 people were injured in the crash, none seriously. 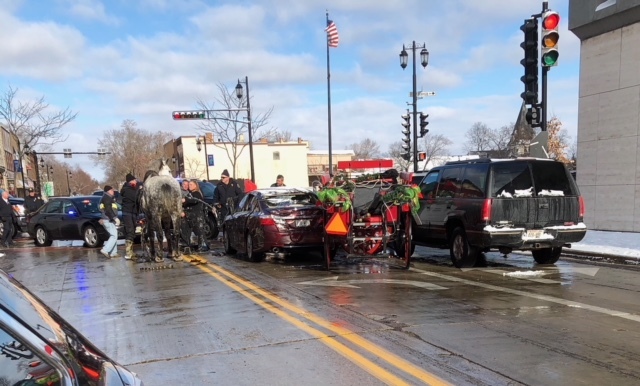 Andrew Smith was having a daddy-daughter day with his 4- and 6-year-old girls when they decided to make a spur-of-the-moment decision and go on a carriage ride.

“Santa was getting his beard trimmed at this little kids salon and they said they had carriage rides, so we went and said, ‘OK, let’s jump in the first one.’ Then it turned into madness,” Smith said.

Another family with two young boys was also on board the carriage when something went wrong.

“The driver was about to hop on, I don’t know if she was adjusting something, and they spooked and just took off, but when they hit those cars at the end, they were full sprint,” Smith said.

“She was hanging on to the sled for the first half block, getting dragged, trying to hang on to the reins, and she got taken out by a car,” Smith said.  “It was probably the scariest thing I’ve ever been through, and then as a dad, having no control over the situation, holding on to my girls, hoping we weren’t going to flip over.”

The carriage operator was not seriously hurt in the crash, and three people in each of the cars that were hit escaped serious injury as well.

The horses received scrapes and bruises, but will survive.

The carriage company did not immediately respond to requests for comment.