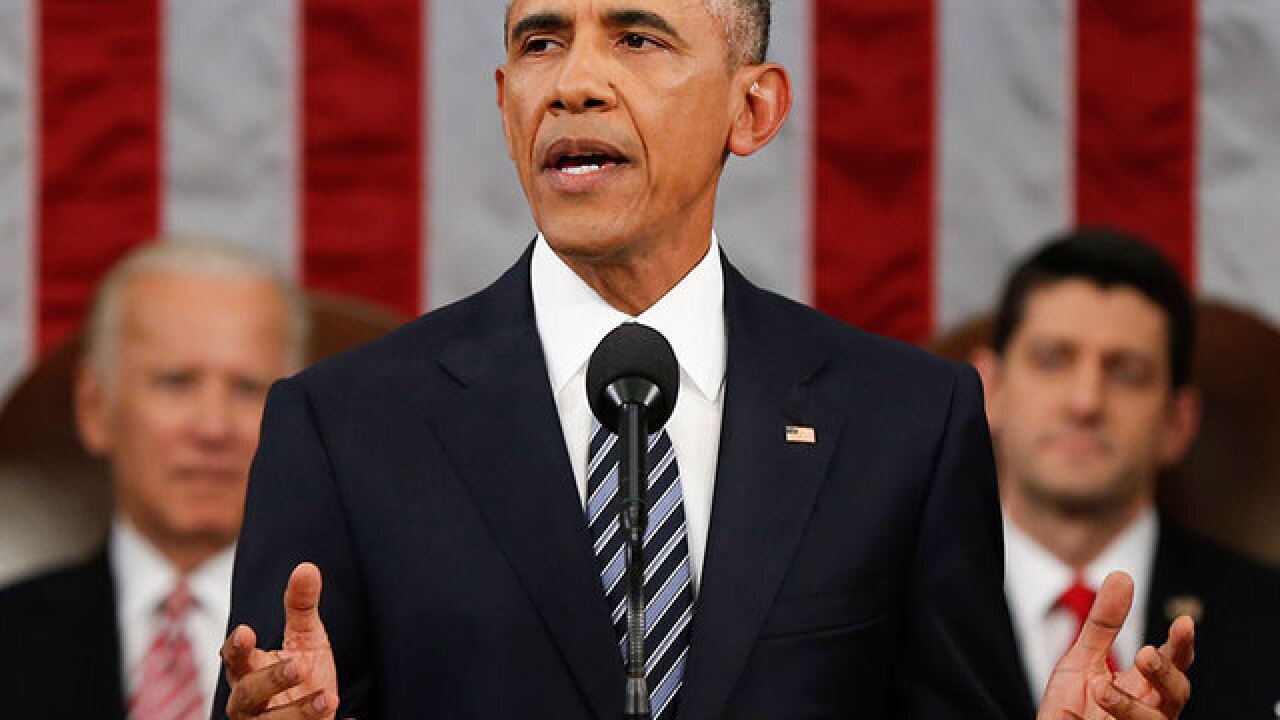 <p>President Barack Obama acknowledges applause before delivering the State of the Union speech before members of Congress in the House chamber of the U.S. Capitol Jan. 12, 2016, in Washington, D.C. In his last State of the Union, President Obama reflected on the past seven years in office and spoke on topics including climate change, gun control, immigration and income inequality. (Photo by Mark Wilson/Getty Images)</p>

OMAHA, Neb. (AP) — Stressing themes from his State of the Union address, President Barack Obama on Wednesday urged the country to respond to economic and other societal changes with confidence instead of fear.

Alluding to the fierce campaign to succeed him that's taking place in neighboring Iowa, Obama told a crowd of 11,000 at the University of Nebraska-Omaha that "I like talking about hope and all the good stuff that's going on." The first votes in the 2016 presidential campaign will be cast in the Iowa caucuses on Feb. 1

"Then you look at some of these ads, it's some doom and some gloom," he said referring to "depressing" campaign ads by Republican presidential candidates that are blanketing the region's airwaves in the run-up to voting.

Obama said the ideas GOP candidates are emphasizing — that America is in decline and everything is scary — isn't the attitude that helped America overcome numerous challenges throughout its history.

"That's not the spirit that brought America so far," he said. "That's not how we traveled so far. And it's not what I see every day."

Obama said America is experiencing "extraordinary change, and that's always a little bit unsettling." But he urged the audience to reject the vision of America that he says Republicans want them to see.

"Do we respond to these changes with fear and do we turn on each other, or do we face the future with confidence in who we are and what we stand for?" he said, offering a condensed version of the nearly hourlong speech he delivered to a joint session of Congress and the nation Tuesday night.

Obama arrived in Republican-leaning Nebraska the day after saying in the State of the Union that one regret of his presidency is that the level of rancor and suspicion between Republicans and Democrats had worsened. He said in the speech that he would try to do better to bridge the divide.

Obama on Wednesday hit many of the same themes of the speech, in which he called for tolerance toward people of different faiths, recounted what he's doing to protect America from the spread of Islamic State-inspired terrorism and described an economic rebound that has seen the national unemployment rate drop to 5 percent, half of what it was when he took office in 2009.

He opened the two-day trip in the living room of Lisa Martin, a high school English teacher and mother of a 1-year-old son. She wrote to him a year ago to express concern about the America her son will grow up in. The White House released a copy of the letter.

Martin later introduced Obama at the University of Nebraska.

The White House said Obama was visiting Nebraska and Louisiana because the states are good illustrations of how his policies are helping people. Obama was spending Wednesday night in Baton Rouge, Louisiana, ahead of an appearance there Thursday.

Unemployment in both states has fallen significantly since he took office and more than 2.5 million residents have gained coverage under his health care law, which the Republican presidential candidates unanimously oppose and have voted to repeal if elected.

Obama wants more states to take advantage of the Affordable Care Act and the federal government's offer to pay the cost of expanding Medicaid to provide health insurance to more people who currently lack coverage.

Polishing the edges of the health care law is one area of focus for Obama in his final year. Both of the states he is visiting this week are moving in that direction.

In Nebraska, despite opposition from Gov. Pete Ricketts, some Republican lawmakers are expected to try again to get a Medicaid expansion bill through the legislature.

In the Omaha suburb of Papillion, Obama chatted with Martin, her husband, Jeff, and others about their concerns. After she saw the size of the press pool that trekked through her snowy backyard into her living room, she told Obama that he had "quite an entourage."

He replied somewhat dryly: "It's the strangest thing about being president."