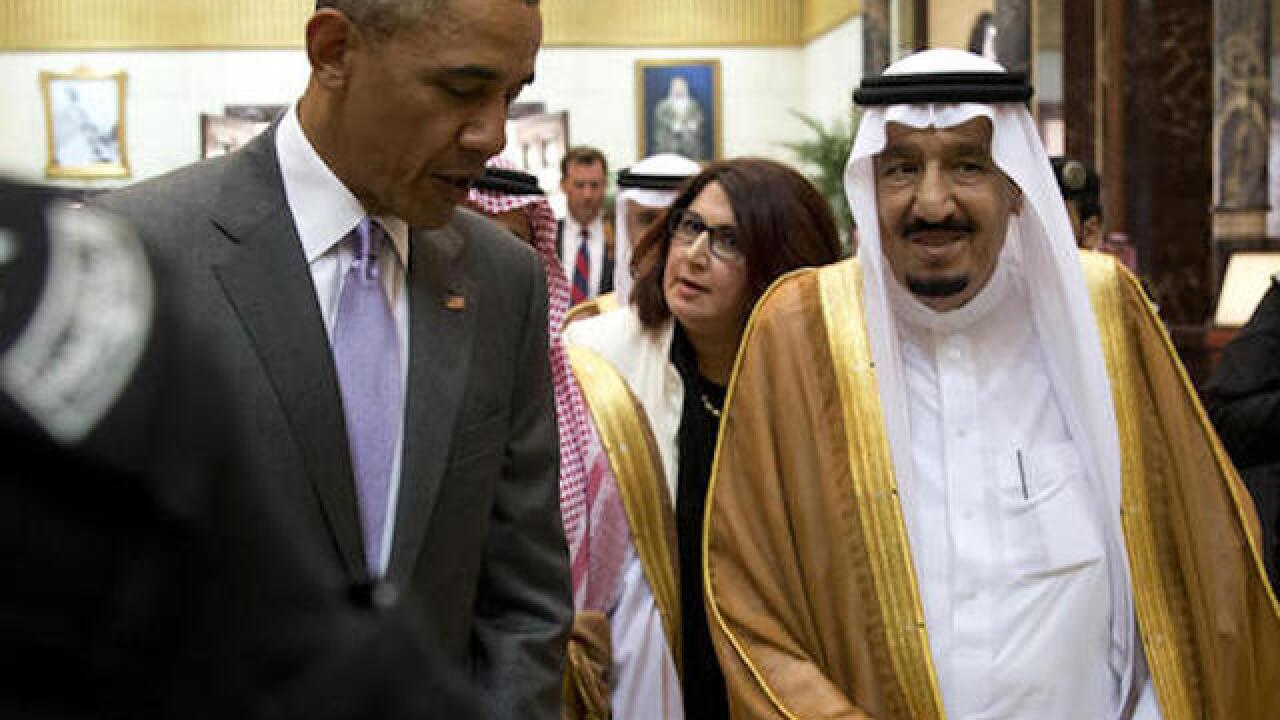 Copyright Associated Press
Carolyn Kaster
<p>President Barack Obama and Saudi Arabia's King Salman walk together to a meeting at Erga Palace in Riyadh, Saudi Arabia, Wednesday, April 20, 2016. The president begins a six day trip to strategize with his counterparts in Saudi Arabia, England and Germany on a broad range of issues with efforts to rein in the Islamic State group being the common denominator in all three stops. (AP Photo/Carolyn Kaster)</p>

RIYADH, Saudi Arabia (AP) — President Barack Obama met Thursday with top officials from six Arab nations in a push to coordinate efforts in the conflicts in Iraq, Syria and Yemen, and to press Gulf allies to step up their role in the fight against the Islamic State militant group.

In a morning session of talks, the leaders expressed cautious optimism about a nascent ceasefire in Yemen and the prospects for peace talks opening in Kuwait Thursday, the White House said. The U.S. views the talks between the Saudi-backed Yemeni government and Iran-supported Shi'ite rebels as a moment of "particular promise and opportunity" that could allow the U.S. and Gulf allies refocus attention on the fight against the al Qaida affiliate that has thrived amid the conflict, deputy national security adviser Ben Rhodes told reporters.

Rhodes said Obama also pressed the Arab allies to increase their support for the besieged Iraqi government as it battles the IS militants and to increase contributions, particularly special operations mission, to the U.S.-led campaign.

The meetings in Riyadh are meant to build on a similar summit convened last year at Camp David, the American president's Maryland retreat. They reflect an effort by the White House to reassure and coordinate with important but wary Mideast allies that harbor serious doubts about Obama's outreach to Iran and U.S. policy toward the grinding civil war in Syria.

Obama and officials from the U.S.-allied countries of the Gulf Cooperation Council opened up talks Thursday morning by posing for a group photo. The leaders, meeting around a circular table in an ornate meeting room in the Diriyah Palace, made polite conversation and smiled for cameras, but offered no remarks.

The summit follows bilateral talks that Obama held with Saudi King Salman on Wednesday shortly after arriving in the kingdom. Besides Saudi Arabia, the GCC includes the United Arab Emirates, Qatar, Kuwait, Oman and Bahrain.

The White House has said the summit meeting will include three sessions. One is aimed at fostering regional stability and another at counterterrorism efforts including efforts to defeat al-Qaida and Islamic State militants. A third session will focus on Iran, which Saudi Arabia and other Gulf states see as a destabilizing rival in the region.

Saudi Arabia, the Emirates and other Gulf countries share the U.S. view that IS militants pose a threat, and have joined the U.S.-led bombing campaign against the group. But they want the U.S. to do more to attempt to remove Syrian President Bashar Assad from power.

The Gulf states are also deeply skeptical of Obama's willingness to negotiate with Shiite powerhouse Iran, and fear that last year's nuclear deal with the Islamic Republic will lead to a rebalancing of regional stances at their expense.

Several of the Sunni-ruled Gulf states view Tehran's backing of Shiite militias in Lebanon, Yemen and Iraq as the main driver of sectarianism and instability in the region.

Disputes over Iran were a major part of Obama's talks with Saudi King Salman on Wednesday. U.S officials said the president restated his belief that the Saudis and Iranian should be looking for ways to defuse tensions, standing by his recent comments suggesting the two learn to "share the neighborhood." Obama's remark in an Atlantic magazine article has helped fuel tensions in the U.S.-Saudi relationship.

"There has to be an opening to have a political resolution to these conflicts," Rhodes said, adding that the Saudis expressed "openness" to increasing engagement with Tehran, but remained skeptical.

"I think they both agreed that it was good to have this opportunity to clear the air," he said.

A U.N.-brokered cease-fire that started earlier this month has been repeatedly breeched — by the Saudi-led coalition fighting on the side of Yemen's internationally recognized government and by the Shiite rebels and their allies.

The Saudi effort has sought to drive the Shiite rebels from the capital and other parts of the deeply impoverished country. The U.S. is not carrying out airstrikes in that campaign but has provided refueling and other logistical help.

Following his meetings with Gulf leaders, Obama planned to depart Saudi Arabia late Thursday for Britain and Germany, the final two stops on his trip.