North Korea sends another US citizen to prison 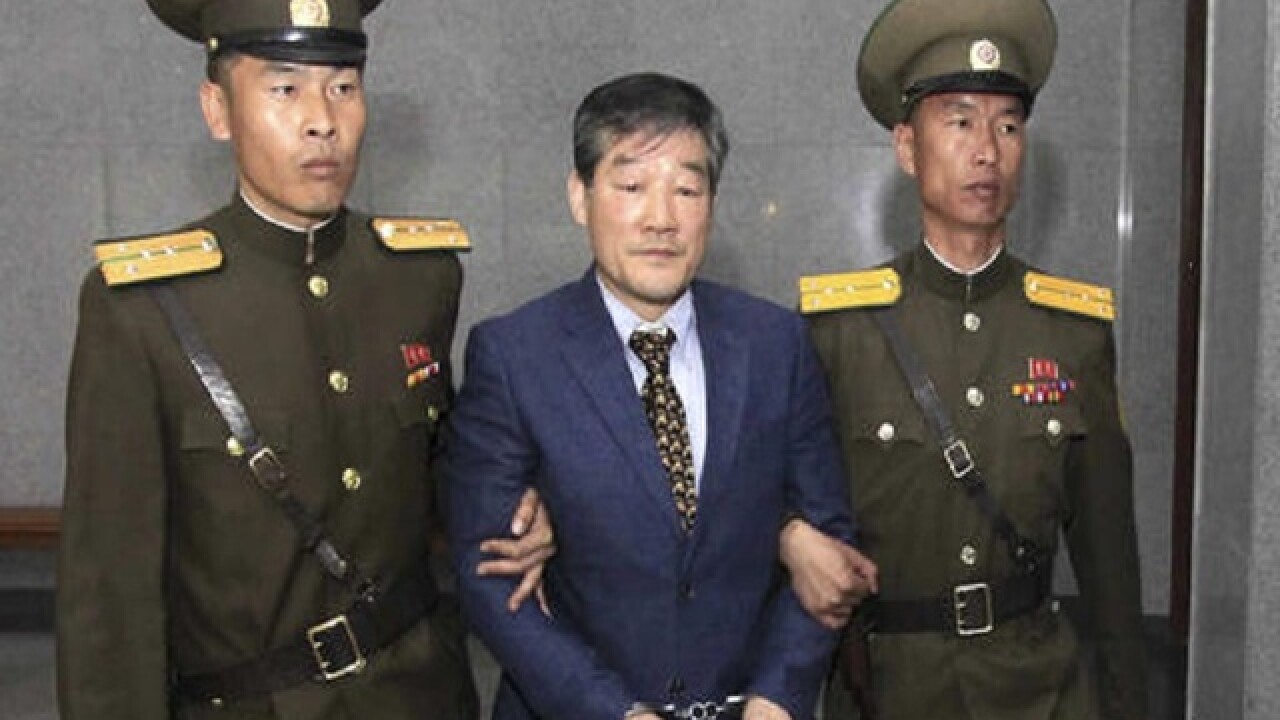 PYONGYANG, North Korea (AP) — North Korea on Friday sentenced a U.S. citizen of Korean heritage to 10 years in prison with hard labor after convicting him of espionage and subversion, the second American it has put behind bars this year.

Kim Dong Chul was sentenced after a brief trial in Pyongyang by North Korea's Supreme Court, which found him guilty of espionage and subversion under Articles 60 and 64 of the North's criminal code.

North Korea regularly accuses Washington and Seoul of sending spies in an attempt to overthrow its government. Outsiders say North Korea seeks to use its U.S. detainees to wring concessions from Washington.

Further details were not immediately available. When Kim was paraded before the media in Pyongyang last month, he said he had collaborated with and spied for South Korean intelligence authorities in a plot to bring down the North's leadership and had tried to spread religion among North Koreans before his arrest in the city of Rason last October.

Kim's sentencing came as North Korea also accused U.S. soldiers of trying to provoke its frontline troops with "disgusting" facial expressions and by encouraging South Korean soldiers to aim their guns at the North. A North Korean military statement warned U.S. soldiers to stop what it called "hooliganism" at the border village of Panmunjom or meet a "dog's death any time and any place."

The U.S. and South Korean militaries had no immediate official response.

Tensions on the Korean Peninsula have risen during weeks of annual U.S.-South Korean military drills, which end Saturday and are usually one of the most anxious times on the Korean Peninsula. North Korea has issued a steady stream of threats to the United States and South Korea over the drills, which it says are preparations for an invasion. Outside analysts say the North also hates the drills in part because it forces the impoverished country to stage its own expensive military responses.

North Korea in recent weeks has fired a barrage of missile and artillery shells into the sea in a show of anger. On Thursday, South Korean and U.S. officials said two suspected medium-range missile launches by North Korea ended in failure.

In March, North Korea sentenced Otto Warmbier, an American university student, to 15 years in prison with hard labor. It said he engaged in anti-state activities while visiting the country as a tourist earlier this year.

Some previously arrested foreigners have read declarations of guilt that they later said were coerced. Most Americans who have been sentenced to long prison terms have been released before serving their full time.

In the past, North Korea has waited until senior U.S. officials or statesmen came personally to seek the release of the detainees, all the way up to former President Bill Clinton, whose visit in 2009 secured the freedom of American journalists Euna Lee and Laura Ling. Both had crossed North Korea's border from China illegally.

About 28,000 American troops are deployed in South Korea to deter potential aggression from North Korea, a legacy of the 1950-53 Korean War, which ended with an armistice, not a peace treaty.

Panmunjom, located inside the 4-kilometer (2.5-mile) -wide Demilitarized Zone that bisects the Korean Peninsula, is where the 1953 armistice was signed.