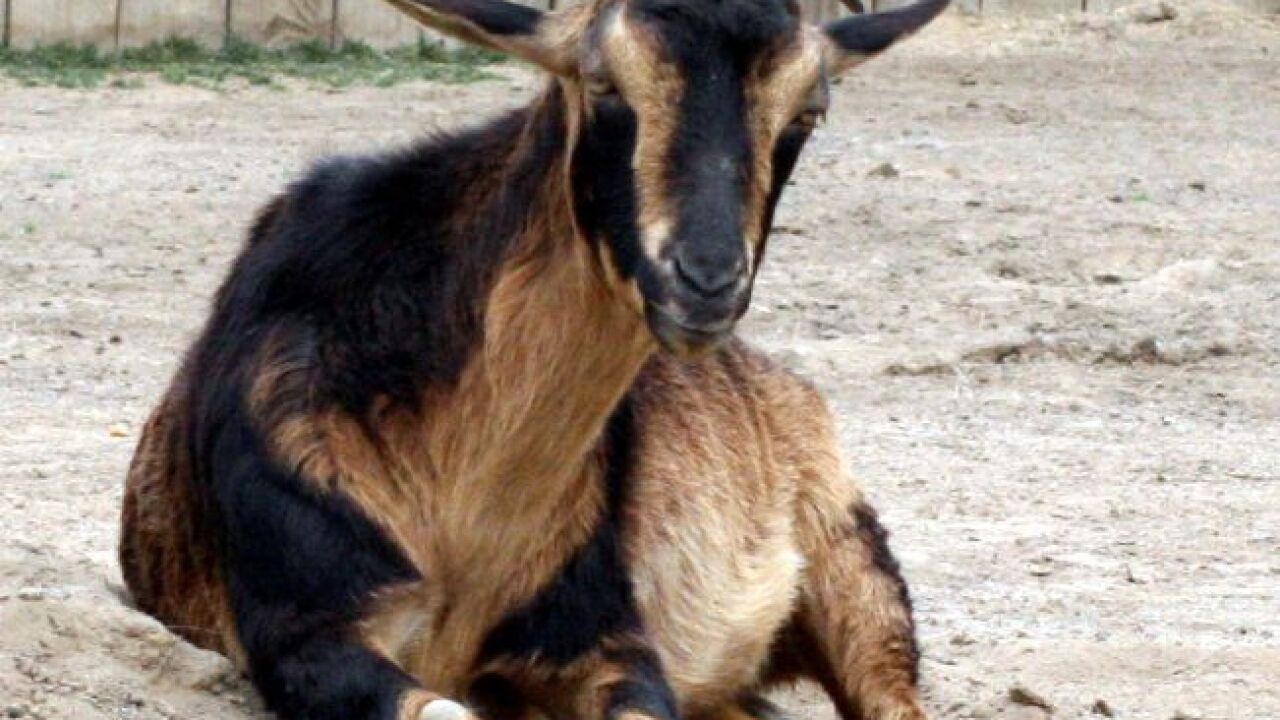 OMAHA, Neb. — A large herd of endangered San Clemente Island goats became stranded by the floods in Nebraska, specifically the flooded Elkhorn and Platte Rivers in western Sarpy County. But after a careful trek to the herd and the help of volunteers, the goats are safe and dry.

Around 5 p.m. on Friday, Joy Bartling, the executive director of nonprofit Scatter Joy Acres , became aware of the stranded goats near 240th and Q Streets. She hitched her trailer, put out a request for volunteers, and headed out to the animals immediately.

The journey to the goats was no easy chore. Because all main streets west out of Omaha were closed, Bartling had to drive in from the south on streets covered in water.

As water was rising, 200 goats huddled together on top of haystacks. The situation was grim.

One by one, goats were gently moved to her horse trailer despite turbulent waters and darkness starting to close in around them. A press release says the animals were fearful and confused. One female goat had a foot stuck in a gate as waters continued to rise, with Bartling working hard to free her.

Thankfully, the fence was breached and her foot was removed, saving the goat from likely drowning.

All 200 goats were eventually loaded inside the trailer and Bartling was ready to head home — but road closures created more issues. She couldn't go back the way she came as the road was impassible, and nearly all of the main roads around the area were closed.

Bartling had no choice but to travel in the opposite direction, not knowing what was ahead.

The roads were covered by water, the press release says, but she continued carefully. A few times, water rose up around the truck and trailer, reaching the headlights.

After pulling through the more chaotic waters, Bartling made the 30-mile trip home.

Dozens of volunteers gathered at Scatter Joy Acres handing out dry towels. Each goat was carefully loaded off of the trailer when it arrived, given to a volunteer who carried them to a warm barn, dried the animal and brought it comfort.

The goats were brought to a holding pen to reunite. One animal had a broken leg but was able to return to her baby and start feeding again.

All of the goats are safe, dried and penned, the press release says. Bartling continues to work to help animals impacted by the floods.

San Clemente Island goats are endangered — in 2007, only 450 of this breed existed.

"This really is the most devastating flooding we've probably ever had in our state's history, from the standpoint of how widespread it is," Nebraska Gov. Pete Ricketts said Monday.

More than 8 million people are under flood warnings in the Midwest and the Mississippi River Valley, said CNN meteorologist Dave Hennen.

"Eastern Nebraska remains the hardest hit area, with much of the southeast part of the state under flood warnings," he said.

The flooding has already killed two people in Nebraska and one man in Iowa. Ricketts said at least one person remains missing in Nebraska.

Flood records have been shattered in 17 places, and more rivers will likely break cresting records this week, according to the Nebraska Emergency Management Agency. (A crest is the highest point of a flood wave .)

CNN contributed to this story.