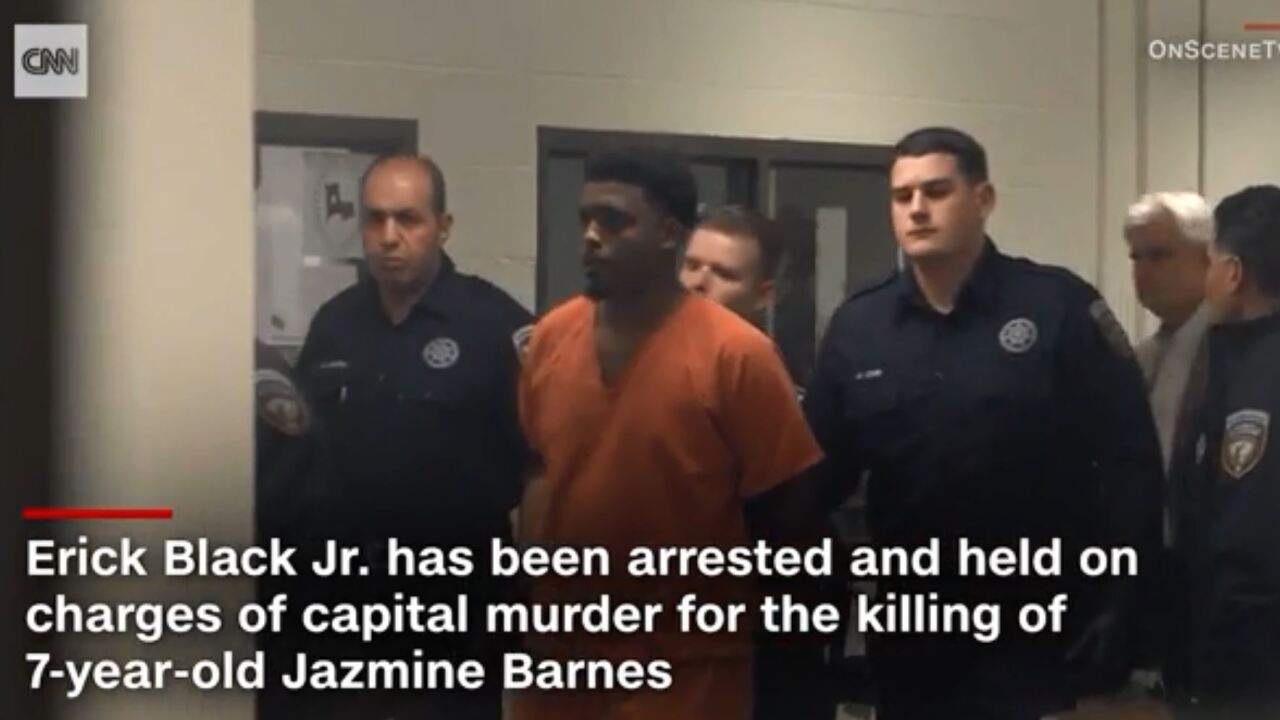 The death of 7-year-old Jazmine Barnes in a Houston drive-by shooting one week ago was likely a case of "mistaken identity," Harris County Sheriff Ed Gonzalez said Sunday.

Investigators believe two people were involved, Gonzalez said. One of those people, the accused driver of the getaway vehicle, Eric Black Jr., is in custody and faces a capital murder charge, Gonzalez said.

Investigators are still looking for the driver of a red pickup truck reported at the scene, Gonzalez said. But they do not believe the driver -- described as a white man in his 40s -- or the truck were directly involved in the shooting, Gonzalez.

"Mr. Black has acknowledged his role in Jazmine's murder," Gonzalez said. Investigators are still trying to verify information related to the second person, Gonzalez said, but he declined to say whether anyone was in police custody, citing the pending investigation.

Texas police have arrested a man suspected of driving the getaway car in the drive-by killing of 7-year-old Jazmine Barnes.

And they caught him during a traffic stop for not using his turn signal.

Eric Black Jr. is expected to be formally charged with capital murder Monday in connection with Jazmine's death.

Jazmine was riding in a car with her mother and three sisters when someone in another vehicle shot Jazmine in the head the morning of December 30.

Black was pulled over for not using his turn signal and was arrested for marijuana possession, according to an affidavit read in a Harris County court Sunday.

But investigators discovered Black also had been identified by an anonymous tipster as one of two suspects involved in the shooting death of Jazmine, according to the affidavit.

Black confessed to homicide investigators that he drove the vehicle used in the shooting when a man in the passenger seat opened fire, according to the affidavit.

The anonymous tipster told authorities that Black and another person, identified in court as "L.W.," had mistaken Jazmine's family's vehicle for another vehicle.

According to the affidavit, Black said the weapon used in the shooting was at his home and gave officers permission to search for it. Officers found a 9mm pistol at the home that was consistent with shell casings recovered from the scene.

How the suspect descriptions changed

Before Black's arrest, police released a sketch of the suspect, which included descriptions from Jazmine's mother and three sisters. Authorities said the sketch depicted a white man in his 40s.

But Black, the man facing a charge of capital murder, is 20 years old and black. Another man who was arrested but has not been publicly identified is also black, Jazmine's mother, LaPorsha Washington, said.

"The detectives stopped by last night ... they said they had two guys and that the gentlemen were black," Washington told CNN affiliate KTRK .

S. Lee Merritt, an attorney advising the Barnes family, said the arrest "was welcome news to the family."

"At the same time, it was a major shock to the family," Merritt told CNN on Sunday morning. "Up until this point, at least four independent witnesses and a composite sketch had identified the primary suspect as a 40-something-year-old white male."

While it may be difficult to understand the discrepancy, "it is imaginable that witnesses confused a fleeing bystander for the actual shooter," Merritt tweeted.

A possible case of mistaken identity

Shortly after Jazmine was killed, both the Harris County Sheriff's Office and Jazmine's mother said the shooting seemed unprovoked. Just as the suspect evaded authorities, so did the motive.

Now authorities say the gunman may have been trying to shoot someone else.

"At this time, investigators do not believe Jazmine's family was the intended target of the shooting, and that they were possibly shot as a result of mistaken identity," the sheriff's office said.

"Investigators are continuing to pursue evidence that could possibly lead to other suspects being charged in this case."

On the morning of Jazmine's death, she and her sisters were still in their pajamas as their mom drove to Joe V's Smart Shop to get supplies for breakfast.

At about 7 a.m., a man drove up next to their car and opened fire, Washington said.

Washington, 30, was shot in the arm, while Jazmine's 6-year-old sister was hit by shattered glass. Jazmine's two teenage sisters were not injured.

An outpouring of support

Hundreds of mourners gathered Saturday outside the Walmart near where Jazmine was killed.

Washington, still recovering from her gunshot wound, thanked everyone who came to honor her daughter. She said Jazmine would have celebrated her birthday next month.

"I'm telling you, every time I see one of y'all reach out for me, I can hold my head up," she said. "I can get up in the morning."

The tragedy of Jazmine's death has made a nationwide impact.

More than 2,700 people have donated to a GoFundMe set up for Jazmine's funeral expenses and family. Houston Texans receiver DeAndre Hopkins has said he'll donate his playoff game check to the family.

Jazmine will also be remembered Tuesday during a "Justice for Jazmine Barnes Community Rally" honoring "all murdered victims in Houston/Harris County," according to organizers.

Services for Jazmine are scheduled to begin at 10 a.m. Tuesday with a viewing at Green House International Church. Her funeral is at noon. Mourners plan to release purple balloons -- Jazmine's favorite color.