Record-breaking California fire may take until September to contain 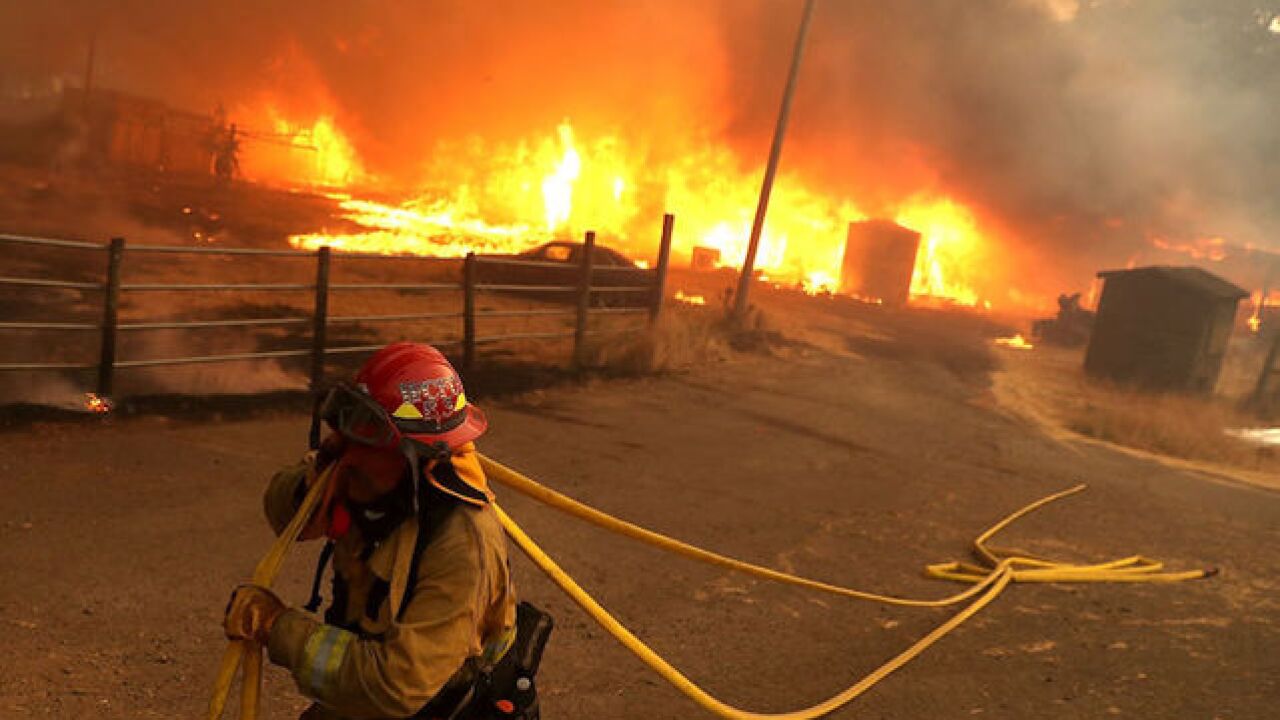 Copyright 2018 Scripps Media, Inc. All rights reserved. This material may not be published, broadcast, rewritten, or redistributed.
Justin Sullivan
<p>A West Covina firefighter pulls hose away from a horse barn that burns as the River Fire moves through the area on July 31, 2018 in Lakeport, California. </p>

It may take until September to contain the largest fire in California history, which is now nearly the size of Los Angeles.

So far, two firefighters have been injured while fighting the Mendocino Complex Fire, which consists of two fires -- the Ranch Fire and the River Fire -- in Northern California. The pair have burned 292,692 acres and was 34 percent contained as of Tuesday evening.

The colossal fire altogether has destroyed 75 residences, according to the California Department of Forestry and Fire Protection, known as Cal Fire.

Last year's Thomas Fire, which is the second-largest fire in California history, took more than six months to extinguish after burning 281,893 acres in Ventura and Santa Barbara counties.

Firefighters in the state are currently battling 17 large fires.

Trump weighs in on wildfires

Trump claimed in his tweet that the fires were being "made so much worse by the bad environmental laws which aren't allowing massive amount of readily available water to be properly utilized." He also added that water in the state was "being diverted into the Pacific Ocean," in a tweet that named California Gov. Jerry Brown.

"This does not merit a response," said Evan Westrup, Brown's spokesman.

"It is climate change that is causing this," says Michael Mohler, spokesman for Cal Fire. "There is no other way to explain explosive fuel conditions, that come with increased winds and higher temperatures."

California's multiyear drought ended last year, but it also left a lot of dried and weakened plants and trees.

California has approximately more than 100 million dead trees in the state due to drought and infestation from bark beetles. Dead trees pose a major hazard as they allow wildfires to spread rapidly in hot, dry conditions. Cal Fire's vegetation management crews are out year-round to thin and remove such trees, while also doing prescribed burns.

Other fires in the state continue

Cal Fire reported that warm temperatures, with highs in the 90s and triple digits, are expected in most areas of the state -- which isn't good news for firefighters. But a slight cooling is in the forecast for the weekend.

More than 14,000 firefighters are battling the wildfires across the state.

The second biggest fire in California is the Carr Fire, located in Shasta County in the northern part of the state.

The deadly fire has been burning for more than two weeks and consumed 172,055 acres, as of Tuesday evening. It has killed seven people and destroyed more than 1,100 homes.

The next largest fire is the Ferguson Fire, near Yosemite National Park, with 94,992 acres. That fire which has lasted more than three week, has killed two people.