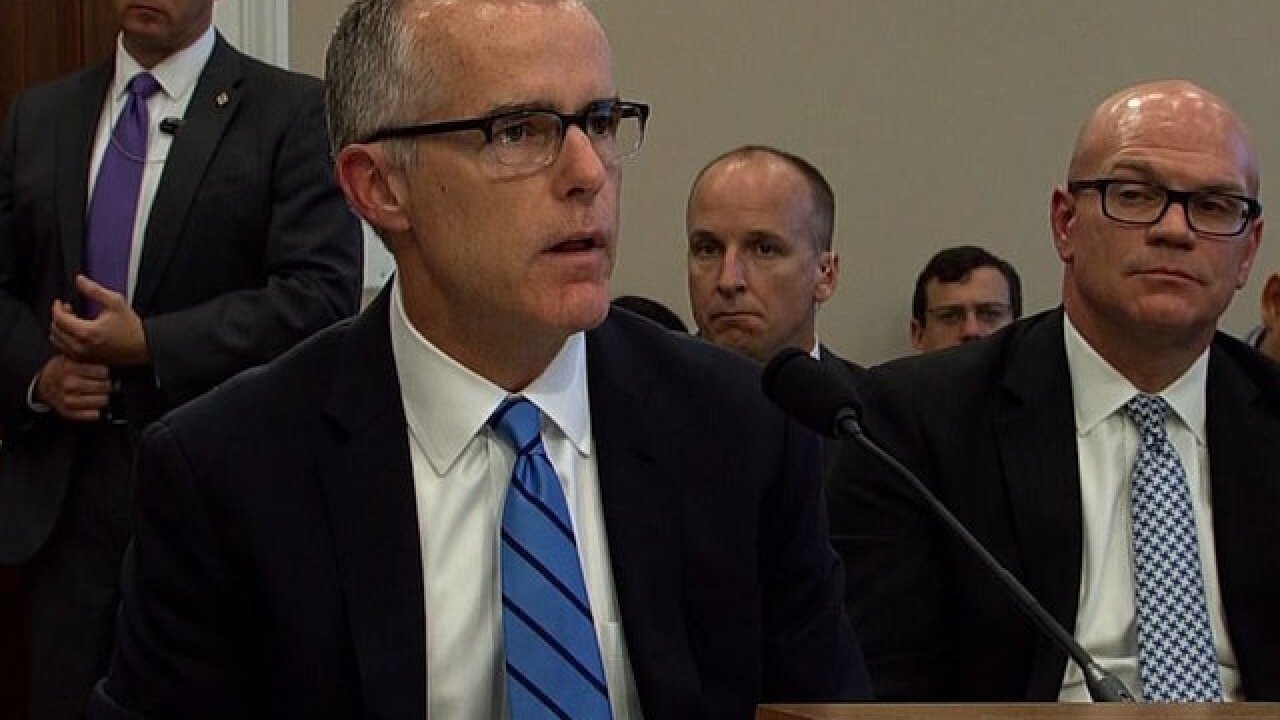 © 2018 Cable News Network, Inc.
POOL
<p>The wife of former FBI Deputy Director Andrew McCabe called out the President for his public attacks, centered on her 2015 run for the state Senate in Virginia, in a Washington Post op-ed.</p>

Former FBI Deputy Director Andrew McCabe has requested the Senate Judiciary Committee provide him with immunity from prosecution in exchange for testifying at an upcoming congressional hearing focused on how senior officials at the FBI and Justice Department handled the investigation of Hillary Clinton's private email server, according to a letter obtained by CNN.

"Under the terms of such a grant of use immunity, no testimony or other information provided by Mr. McCabe could be used against him in a criminal case," wrote Michael Bromwich, a lawyer for McCabe, to Senate Judiciary Chairman Chuck Grassley, who has requested McCabe testify next week.

Grassley, an Iowa Republican, has quietly requested that several former officials appear in front of the Judiciary Committee to discuss the long-awaited internal Justice Department report, which sources say will detail a series of missteps surrounding the Justice Department and FBI's investigation into Clinton's handling of classified information while secretary of state.

The inspector general's report has not yet been released, but Grassley has invited former FBI Director James Comey and former Attorney General Loretta Lynch to testify as well, according to those familiar with the plans.

The stakes for McCabe's appearance, however, are particularly high. The former No. 2 at the FBI is entangled in a separate criminal investigation stemming from an earlier report from the inspector general's office that concluded he lied to internal investigators. McCabe has steadfastly denied wrongdoing, but any congressional testimony he provides could have serious implications for his criminal case.

"Mr. McCabe is willing to testify, but because of the criminal referral, he must be afforded suitable legal protection," Bromwich wrote to Grassley. "This is a textbook case for granting use immunity. . . . If this Committee is unwilling or unable to obtain such an order, then Mr. McCabe will have to no choice but to invoke his Fifth Amendment privilege against self-incrimination."

If McCabe invokes his Fifth Amendment right instead of answering certain questions, it could set up a contentious confrontation with lawmakers. They could serve him with a subpoena and if he continues to refuse to testify, lawmakers could pursue a contempt resolution against him and refer the matter for prosecution by the DC US Attorney's Office or enforce the subpoena through civil action in federal court.

Bromwich's letter also makes clear that McCabe is willing to provide emails that "demonstrate that Mr. McCabe advised former Director Comey, in October 2016, that Mr. McCabe was working with FBI colleagues to correct inaccuracies before certain media stories were published."

The discrepancy between Comey's recollection and McCabe's statements to internal investigators about authorizing FBI officials to talk to a reporter about an ongoing investigation regarding the Clinton Foundation in 2016 served as one of the linchpins to the inspector general's earlier report finding he "lacked candor."

Grassley wrote to the FBI Tuesday requesting that McCabe be released from a nondisclosure agreement that prevents him from providing those emails, among other records.

McCabe was fired from the FBI in March less than two days shy of his retirement after rocky final months of service. During the 2016 campaign, then-Republican presidential nominee Donald Trump latched on to a report that McCabe's wife accepted nearly $500,000 from the political action committee of then-Democratic Virginia Gov. Terry McAuliffe, a Clinton family ally, during a failed bid for state Senate in 2015. Though McCabe was not promoted to deputy director at the FBI until months after his wife lost the race, Trump continues to assert on Twitter that McCabe had a conflict of interest in later overseeing the FBI's investigation into Clinton's use of a private email server, given the donations to his wife.

Grassley has set the Judiciary hearing for next Monday, but it could be delayed, as the inspector general's report -- while a moving target -- is still not public yet. Sources familiar with the report describe it as a massive undertaking, walking through the events leading up to the 2016 election over roughly 500 pages.