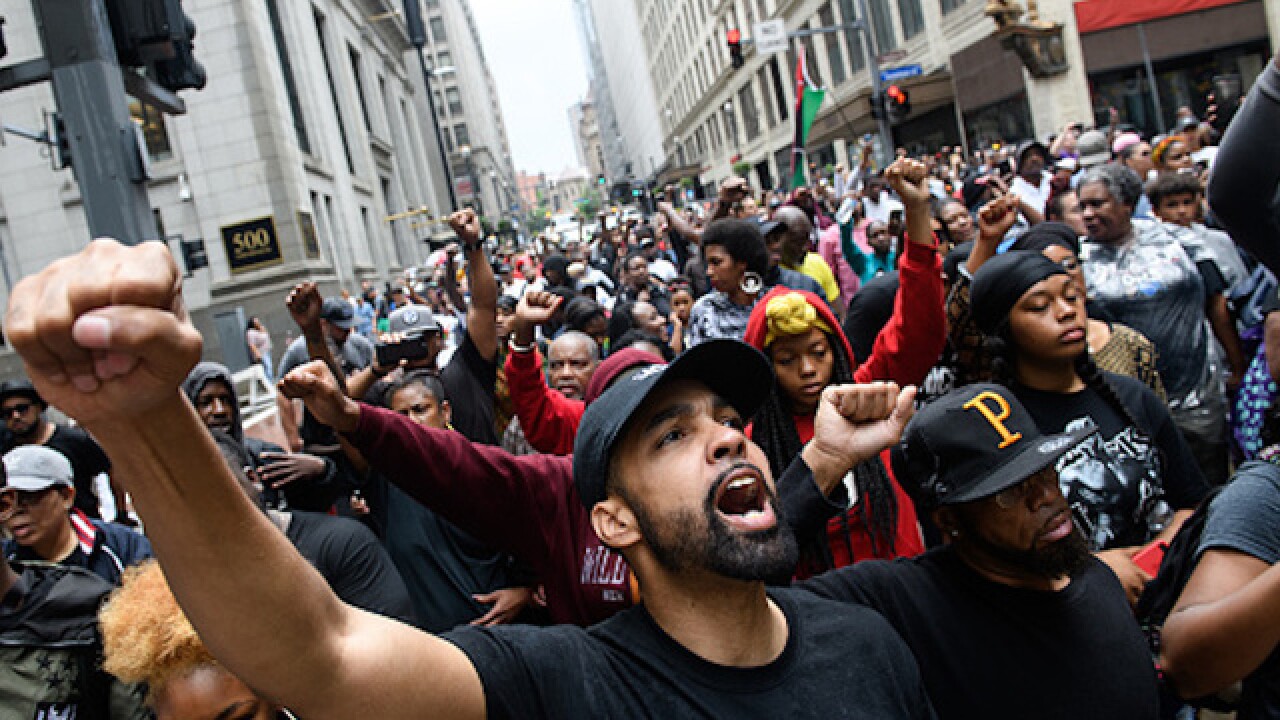 Image copyright 2018 Getty Images. All rights reserved. This material may not be published, broadcast, rewritten, or redistributed.
Justin Merriman
<p>PITTSBURGH, PA - JUNE 23: Protestors join a march for the police shooting of Antwon Rose during a Juneteenth celebration on June 23, 2018 in Pittsburgh, Pennsylvania. Rose, an unarmed black teenager, was shot Tuesday night, leading to protests and outraged across the city. Juneteenth commemorates the June 19, 1865, announcement of the abolition of slavery in the U.S. state of Texas. (Photo by Justin Merriman/Getty Images)</p>

A Pennsylvania mayor is apologizing for posting Facebook images urging police to "bring the hoses" against protesters and blast them with water cannons, evoking images of the civil rights era.

Karen Peconi is the mayor of Arnold, a suburb of Pittsburgh.

Her posts surfaced Monday with messages urging officers to hose down protesters, along with a historic 1963 image of water cannons being used against demonstrators in Alabama, according to CNN affiliate WTAE.

"I'm posting this so the authorities everywhere sees (sic) this ... bring the hoses," Peconi wrote, according to the affiliate. "They don't care about jobs for PGH ... none of them work now. That's how they can do this at 7 a.m. Very sad."

Protesters have taken to the streets for days to demand justice in last week's killing of unarmed African-American teen Antwon Rose by a white police officer in East Pittsburgh.

Prosecutors charged Officer Michael Rosfeld with criminal homicide Wednesday in the death of Rose, who was shot several times as he tried to flee after a traffic stop on June 19th.

The 17-year-old was a passenger in the car suspected in an earlier shooting but did not appear to be the shooter, authorities say. Investigators found two guns under the passenger seat.

Rosfeld is out on bond, and is being electronically monitored. He's on paid administrative leave and will be in court in July for a preliminary hearing. His attorney told the affiliate he does not think this is a murder case, and he's not sure what Rosfeld was supposed to do, given the situation.

In another post, the mayor wrote "we need one of these for tomorrow," referring to an image of authorities using water cannons against protesters, the affiliate reported.

When a reporter from the affiliate called the mayor Monday to clarify the comments, Peconi said she had no comment. Then she switched to speaking in third person and said, " 'the mayor didn't' post those,'" the affiliate reported.

Peconi later issued a statement apologizing for the comments.

"I love this community, I would do anything for the people here. I don't take my position as mayor lightly and deeply regret the comments I made on Facebook," the statement said. "It was never my intention to offend anyone, and for those who I offended I am sincerely sorry."

CNN has reached out to the mayor by phone, but has not heard back. The post is not available on Facebook and it's unclear whether she deleted it.

Image is from 1963 protests

David Regoli, the city's solicitor, described the comments as unfortunate and not representative of the community.

During the protests in May 1963, police in Birmingham used high-powered hoses and snarling dogs to stop black protesters who were demanding equal rights.