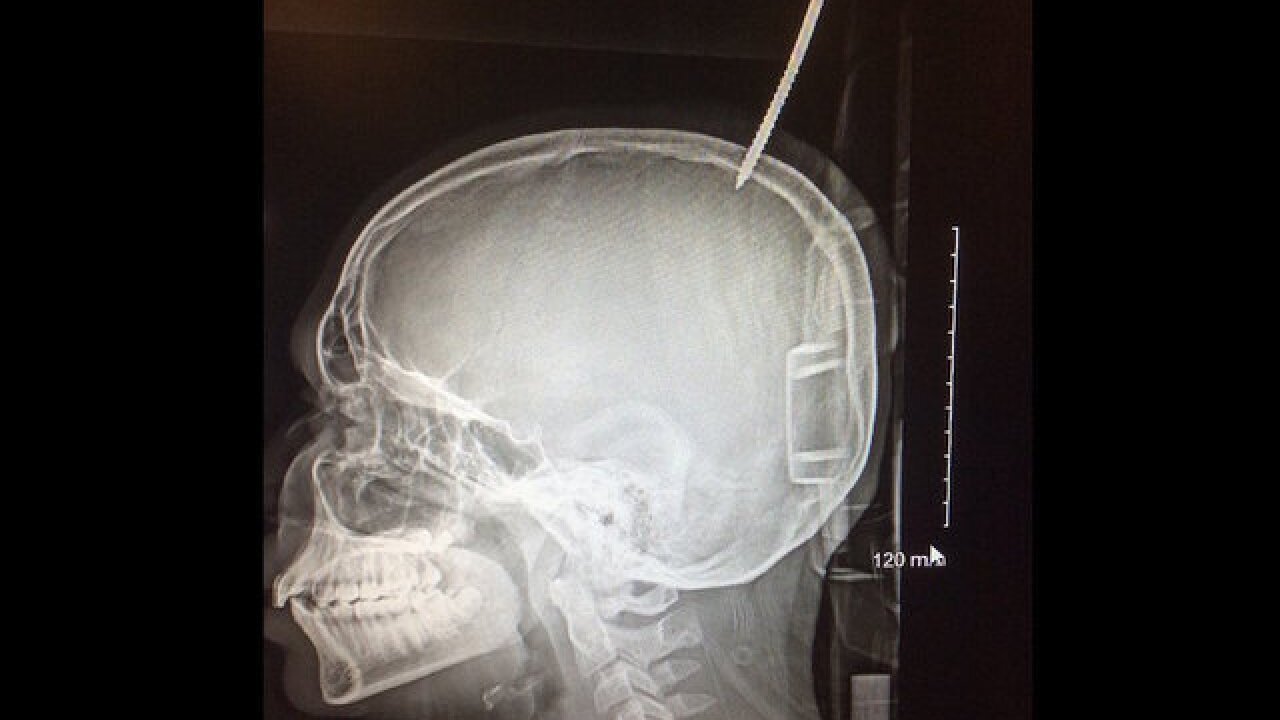 A freak accident nearly took the life of a 13-year-old Maryland boy last weekend when a 6-inch screw entered his skull, his family and doctor told CNN.

Darius Foreman was building a treehouse Saturday when he fell from a branch, knocking over a five-foot-long wooden board, which came down on top of his head, his mother Joy Ellingsworth recounted.

An X-ray from Johns Hopkins Hospital, where the boy was airlifted, shows a portion of the screw lodged right between the two halves of the brain -- threatening to tear the largest channel that drains blood and other fluids from the brain. Injury to this part of the brain could have been "catastrophic," according to his surgeon, Dr. Alan Cohen.

"He was a millimeter away from having himself bleed to death," Cohen, chief of pediatric neurosurgery at Johns Hopkins, told CNN.

"I absolutely panicked," Ellingsworth said. "It was very scary, one of the scariest things I've ever been through."

Because the board was still attached to him by the screw in his head, fire rescue couldn't fit Foreman into the ambulance at first, so they used the family's saw to cut the board down from 5 feet to 2, Ellingsworth said.

Even then, he still had trouble fitting into the first of two helicopters that came to airlift him to the hospital.

"We were on pins and needles" during the delicate operation, said Cohen. He removed tiny fragments of bone and a small blood clot during a two-hour surgery early Sunday.

"He had the board in there a total of about seven hours," his mother said.

Cohen said he had been at home with his wife, neurosurgeon Dr. Shenandoah "Dody" Robinson, when they got the call.

"It doesn't matter who's on call; you both wake up," Cohen said. "So she went in first and cut the bolt and the board off his head," leaving the end of the screw for Cohen's team to operate on.

The operation was a success, and Foreman was discharged Thursday.

He kept the screw, a memory of his close call and a gift from the hospital on his 13th birthday -- the day he was discharged.