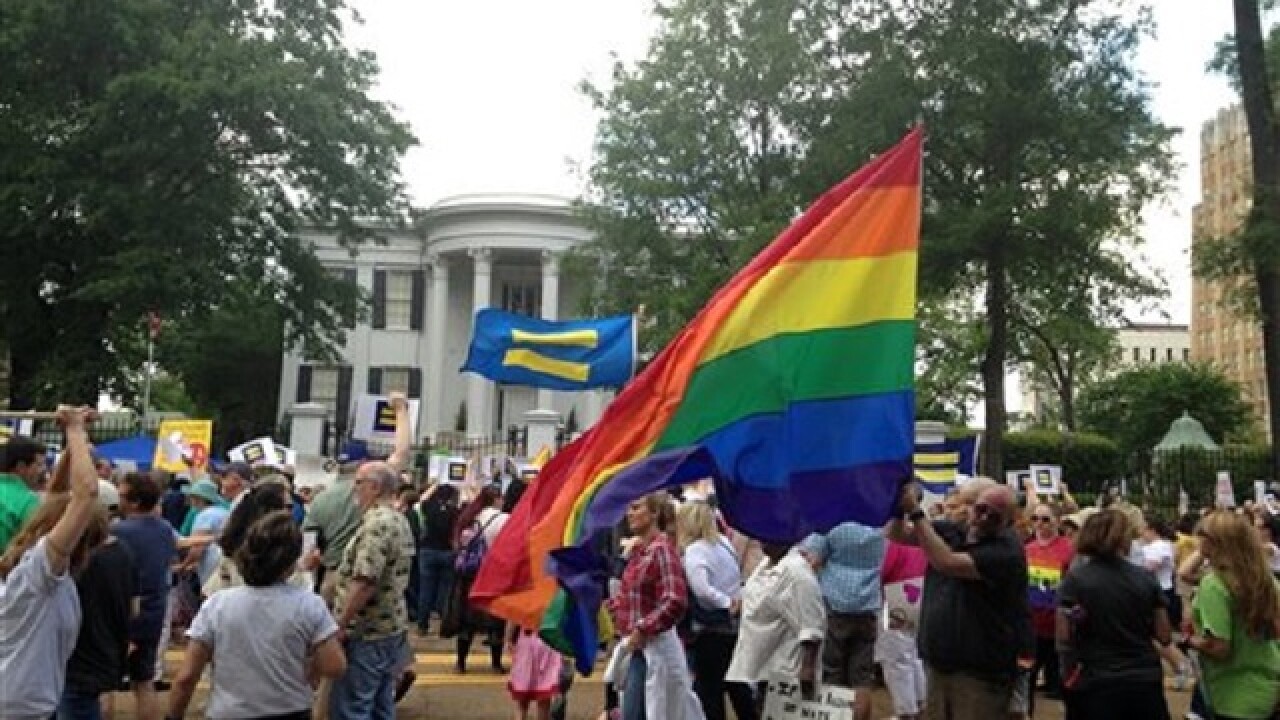 JACKSON, Miss. (AP) — Hundreds of supporters of lesbian, gay bisexual and transgender rights protested Sunday against a new Mississippi law they call discriminatory, saying they're not giving up their fight.
The law, which takes effect July 1, is to allow religious groups and some private businesses to deny services to same-sex couples and transgender people.
More than 300 people marched from the state Capitol to the governor's mansion in Jackson, the capital city, bidding to keep up pressure on Gov. Phil Bryant and other Mississippi leaders who support the law.
"We need to show him loud and clear we're not going away," Chad Griffin, president of the Human Rights Campaign, told the crowd gathered outside the white columned-mansion.
The only signs of activity inside the mansion's wrought iron fence were a few State Capitol police officers walking around.
Bryant and other supporters have said the law reinforces the First Amendment guarantee of freedom of religion. They also said opponents are overreacting, and that Mississippi needed to take action after the Supreme Court legalized gay marriage.
The law would allow a church group to decline services including housing or adoption to gay couples. Private businesses could refuse marriage-related services such as room rentals, cakes, photography or flowers. Any employer or school could refuse to allow a transgender person to use the bathroom of their choice.
Among government employees, clerks could refuse to issue marriage licenses and judges could refuse to marry gay couples. In both cases, governments are supposed to ensure licenses and marriages are "not impeded or delayed."
No state or local laws compelling services for LGBT persons had been passed in Mississippi. The measure prohibits cities and counties from passing such ordinances.
Speakers at Sunday's rally included the leader of the Mississippi chapter of the NAACP, an executive with the state chapter of the American Civil Liberties Union, and an Episcopal priest who was a plaintiff in a successful lawsuit to abolish Mississippi's ban on same-sex couples adopting children.
Many of the speakers likened the struggle against the law to the fight against 1960s era segregation of African-Americans.
"I don't like the repeat of this movie, when a Mississippi governor decides they want to make a name for themselves by attacking the dignity of an entire group of people," said Ben Jealous, former national president of the NAACP.
Jody Owens, managing attorney for the Southern Poverty Law Center in Mississippi, encouraged people who experience discrimination to call his organization, laying possible groundwork for a lawsuit or lawsuits.
"We need to know who's been targeted and why," Owens told the crowd.
After the rally, Owens said opponents might challenge the law by arguing about the general stigma it casts on particular groups. Yet he also said more concrete examples would make for stronger legal cases.
Associated Press 2016