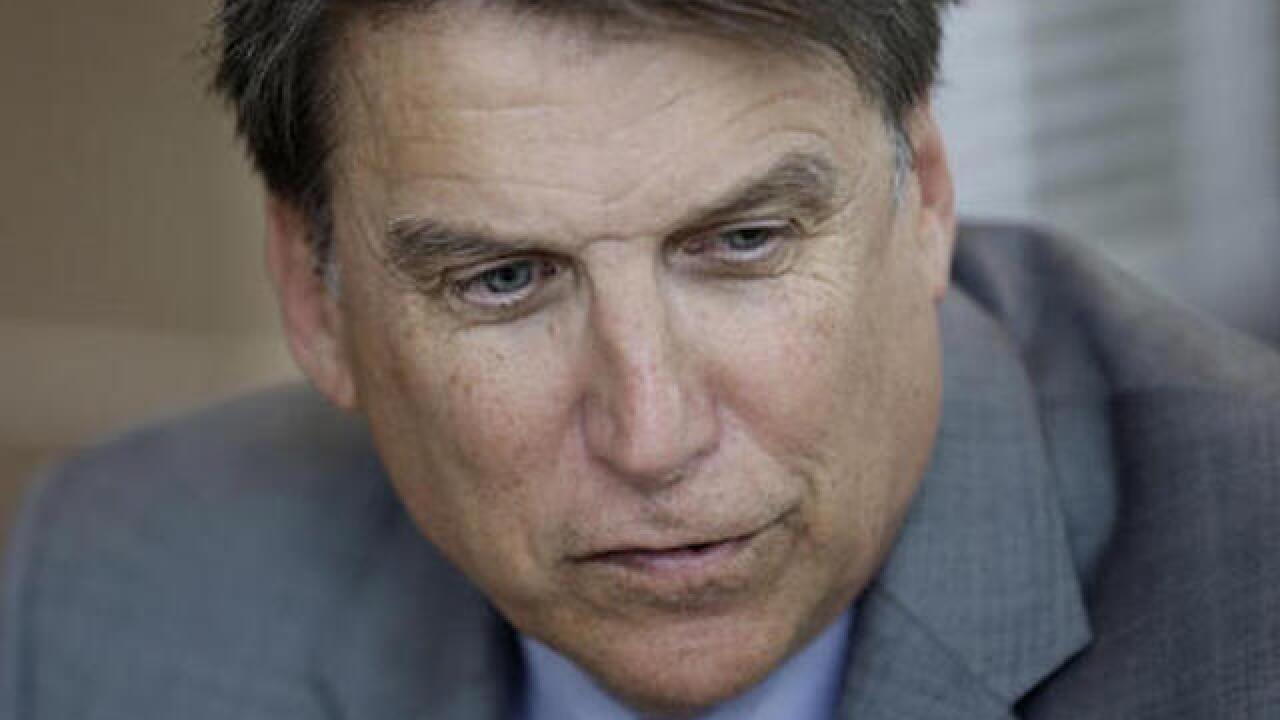 When he signed an executive order seeking to lessen the law's impact, it upset some of his conservative supporters who said he "went too far" in bowing to national pressure. In yet another blow Tuesday, a federal appeals court that oversees North Carolina issued an opinion that now threatens part of the state law.

Through it all, McCrory has emerged — perhaps reluctantly — as the public face of the law and could become the biggest political loser as he suddenly finds himself in tough re-election fight already swayed by the issue.

"He's in a tough spot," said Chris Cooper, a political science professor at Western Carolina University. "The executive order probably isn't going to mean a lot policy-wise. He's running the risk, no matter what he does, of alienating the average North Carolina voter. He's sort of stuck in the political middle."

In a nod to the balancing act, McCrory described during an interview Sunday on NBC's "Meet the Press" ''the disconnect we have between the corporate suites and main street," saying he was recently praised by small-town voters shortly before fielding a phone call from a concerned corporate leader.

After McCrory signed the law in late March, condemnation from the business community was swift. Deutsche Bank halted plans to add 250 North Carolina jobs, while Paypal reversed a decision to open a 400-employee operation center in Charlotte. Local tourism boards say they lost millions of dollars in economic impact because of cancelled conventions and business meetings.

Chris LaCivita, McCrory's chief campaign consultant, rejects the idea that the governor has stumbled. He said there's no doubt McCrory is getting hammered because the governor is the top target for national Democrats in a presidential battleground state. He faces Democratic Attorney General Roy Cooper, who has refused to defend North Carolina's law in court. Both have already used the conflict to boost donations.

"So if anyone doesn't believe that politics is at play here, they're living in a cave," LaCivita said.

During his first gubernatorial campaign and 14 years as Charlotte's mayor, McCrory cultivated an image as a moderate "business Republican" who prioritized economic development over social issues. But things appeared to change when he signed a divisive voter ID law in 2013, and an immigration bill last year restricting local governments' policies on ID cards and police tactics.

Now, McCrory is in the difficult position of trying to appear business-friendly without watering down his appeal to social conservatives.

"Once he cast his lot with one side it makes it real difficult because if you backtrack, now you risk alienating the people that gave you a bunch of attaboys when you signed the legislation," said Charles Bullock, a political science professor at the University of Georgia.

On Tuesday, the U.S. 4th Circuit Court of Appeals sided with a transgender teen's arguments that a Virginia school board violated Title IX by forbidding him from using the boys' restroom. In the North Carolina law, a provision requires transgender students in public schools and universities to use bathrooms corresponding to the gender on their birth certificate.

McCrory said he wants to hear from state lawyers about whether schools can keep implementing the law while the Virginia defendants consider whether to appeal.

Several other southern states recently enacted or considered legislation restricting the rights of lesbian, gay, bisexual or transgender people. But nowhere else has the fallout been as harsh as North Carolina.

In Georgia, the negative publicity dwindled after the governor's veto of a piece of legislation that would have allowed businesses to refuse service based on religious beliefs. On Monday, Tennessee withdrew a bill on transgender bathroom access after its governor expressed concerns, and South Carolina's governor has said a similar proposal in her state is unnecessary.

Mississippi, meanwhile, enacted a law that allows businesses to refuse services to gay customers, but has gotten less attention partly because of its conservative track record and smaller population than North Carolina's.

Another test for McCrory comes when lawmakers reconvene Monday and perhaps weigh a request in the governor's executive order to reverse part of the law stripping the right to sue over workplace discrimination in state court.

"His potency as governor will be again defined in part by how the legislature reacts to his proposal," said Ferrel Guillory, who directs the Program on Public Life at the University of North Carolina.

McCrory's choice of whether to sign or veto the LGBT legislation was laden with a lot of symbolic meaning — if little practical effect on policy-making. The state's GOP legislative leaders — with views further to his right — control a veto-proof majority that would have allowed them to enact it with or without him.