'Laze' is a big problem Hawaii residents near volcano are facing 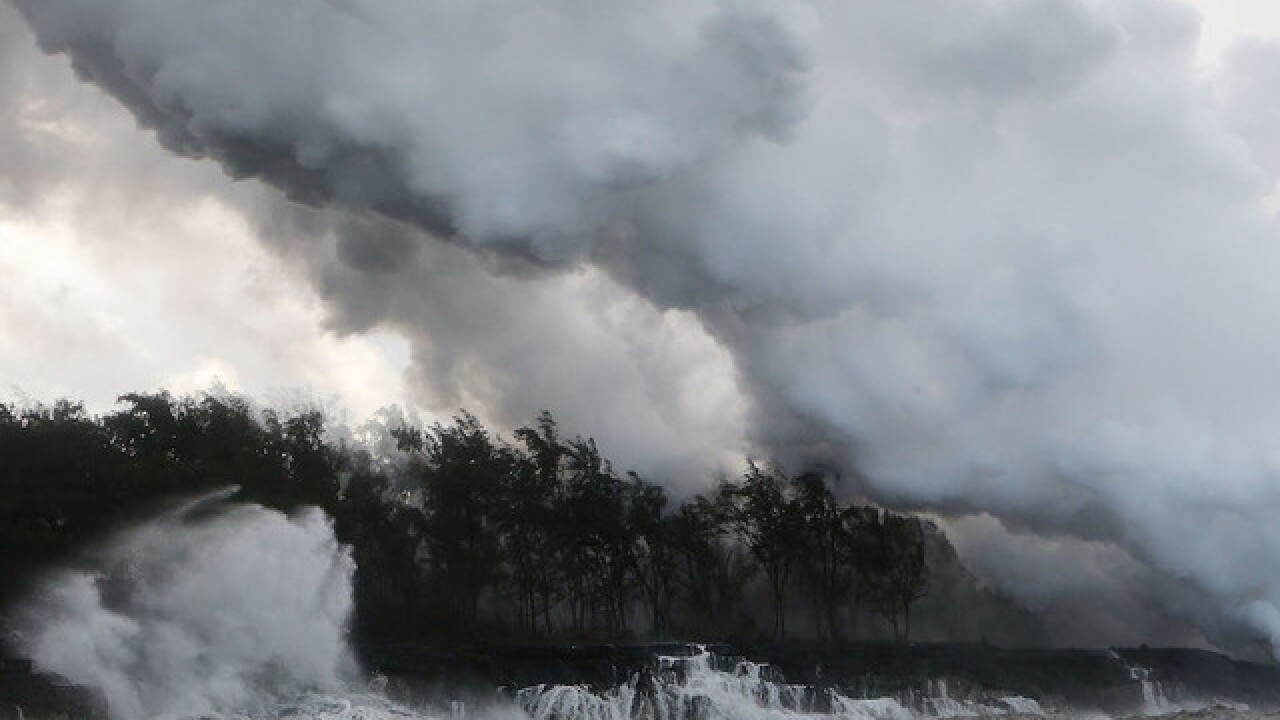 Image copyright 2018 Getty Images. All rights reserved. This material may not be published, broadcast, rewritten, or redistributed.
Mario Tama
<p>Steam and volcanic gases rise (R) as lava enters the Pacific Ocean, after flowing to the water from a Kilauea volcano fissure, on Hawaii's Big Island on May 20, 2018 near Pahoa, Hawaii. Officials are concerned that 'laze', a dangerous product produced when hot lava hits cool ocean water, will affect residents. Laze, a word combination of lava and haze, contains hydrochloric acid steam along with volcanic glass particles. </p>

Residents on the Big Island face several threats Monday from Kilauea: In addition to the possibility of more eruptions, lava is oozing into the ocean, sending hydrochloric acid and volcanic glass particles into the air.

That's producing laze, a dangerous mix of lava and haze, which is adding to the ongoing challenges. Levels of sulfur dioxide have tripled in emissions. And Kilauea Volcano's summit had several small ash emissions Sunday, releasing plumes of gas and billowing steam.

Over the weekend, a man sitting on his porch was hit in the leg by a lava bomb, leaving him seriously hurt, according to Hawaii County Civil Defense Administrator Talmadge Magno. It's the first serious injury reported since the volcano began erupting May 3.

"I heard the injury was quite bad," Magno told CNN affiliate KHON Saturday.

"At any time, activity may again become more explosive, increasing the intensity of ash production and producing ballistic projectiles very near the vent," said the USGS. "Communities downwind should be prepared for ashfall as long as this activity continues."

The Kilauea volcano erupted at least twice this weekend -- at one point launching a cloud of ash up to 10,000 feet high.

"Additional explosions possible at any time," according to the Hawaiian Volcano Observatory.

'It's very dynamic and very dangerous'

The threat from laze began after lava crossed Highway 137 late Saturday night and entered the Pacific Ocean, the Hawaiian Volcano Observatory said. This has cut off parts of the road, a critical access point, which affects thousands of residents, reported CNN affiliate Hawaii News Now.

Officials are warning people to stay away from areas where lava meets the ocean, as laze can cause lung, eye and skin irritation.

There are additional hazards as lava enters the ocean, including the scalding, hot water, said Ken Rubin, the department chair of geology and geophysics at the University of Hawaii.

"The land formed during the process -- we call it the lava delta -- can be very unstable. It can break off without any warning. It can cause waves of hot water to wash back on the shore. It's very important for people to stay away from that area. It's very dynamic and very dangerous," he told CNN.

The US Coast Guard enforced a Lava Entry Safety Zone Sunday for the navigable waters around the Kilauea Volcano. A Coast Guard statement says the safety zone includes all waters extending about 300 meters around the entry of the lava flow.

The USGS said the latest lava effusion near Leilani Estates is a "major eruption."

"At the summit, we expect that the small steam explosions will continue at similar levels to what has occurred over the past several days," the agency said. "In 1924, the summit explosions persisted for over 2 weeks, so that's a good baseline for what to expect with the current activity."