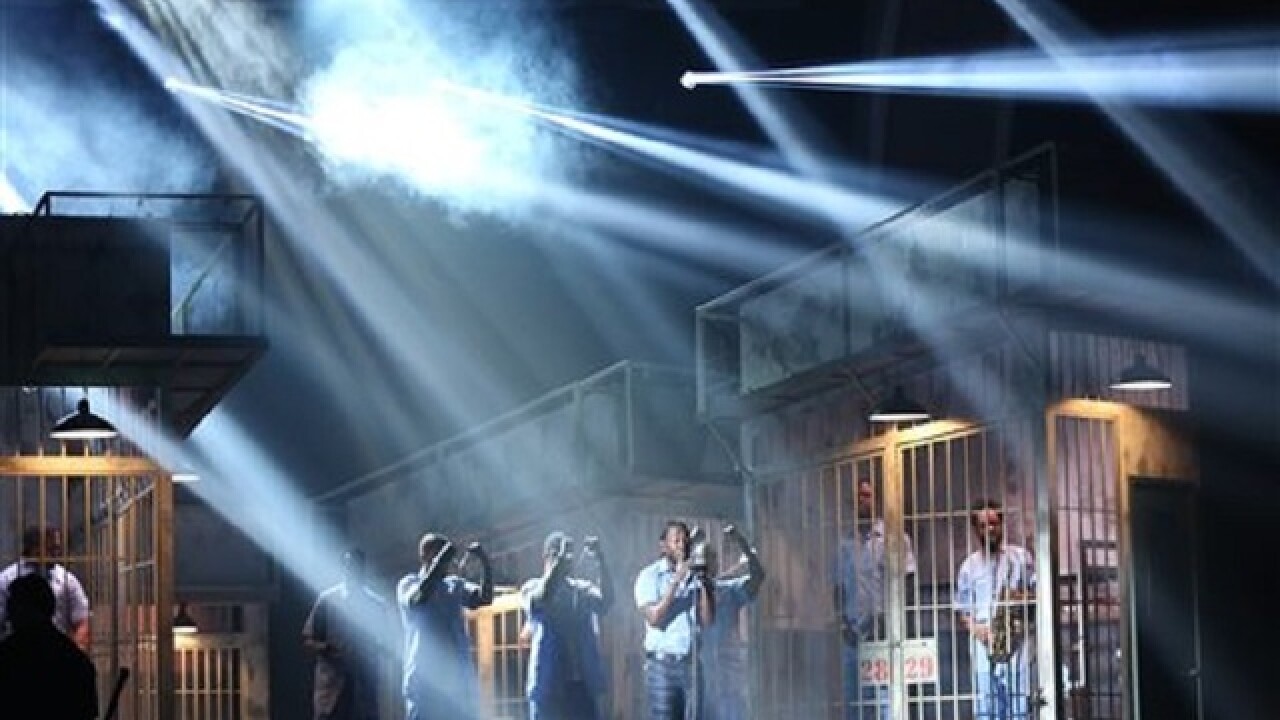 By: Associated Press
Posted at 9:57 PM, Feb 15, 2016
LOS ANGELES (AP) — Kendrick Lamar had a show-stopping moment when he took the stage at the Grammy Awards, but Adele's performance didn't match the greatness of her past live efforts.
Lamar started his performance Monday appearing beaten, in handcuffs, with chains around his hands and a bruise on his eyes. He went on to fuse rap, jazz, reggae and African sounds for a commanding performance as he rapped "The Blacker the Berry" and the Grammy-nominated "Alright" passionately. He ended with a map of Africa, and the city of Compton imprinted in it.
Adele sang "All I Ask," co-written by Bruno Mars, with a piano behind her. But the audio sounded off and appeared to throw off her performance.
Justin Bieber started "Love Yourself" on guitar in good form, but ended with a vocal struggle. Little Big Town and Demi Lovato, however, had shining moments during their performances, hitting impressive and smooth high notes.
The night also featured touching tributes: The Eagles' Glenn Frey and Maurice White of Earth, Wind & Fire were honored by their longtime friends, while Rihanna pulled out of the awards show.
Stevie Wonder, joined with Grammy-winning a capella group Pentatonix, sang "That's the Way of the World" in honor of White, while members of the Eagles and Jackson Browne sang "Take It Easy" for Frey at the Staples Center.
White died on Feb. 4 and Frey died on Jan. 18. Natalie Cole will also be remembered during the telecast, while Lady Gaga is set to pay tribute to David Bowie.
Rihanna's representative said in a statement that the singer couldn't perform at the show due to doctor's orders.
"After Grammy rehearsal today, Rihanna's doctor put her on vocal rest for 48 hours because she was at risk of hemorrhaging her vocal chords. The antibiotics she has been on for three days did not kill the infection adequately therefore she cannot perform safely," the statement read.
Ed Sheeran walked away with one of the night's top honors, song of the year for "Thinking Out Loud."
"We wrote it on a couch in my house," he said of his hit song, which also won him best pop solo performance.
It was the first time Sheeran won a Grammy; and the night marked first wins for Bieber, the Weeknd, Chris Stapleton, Pitbull and Alabama Shakes.
The Weeknd, who won two awards in the pre-telecast, performed in a cube that was brightly lit for "Can't Feel My Face" until he switched to piano-tinged version of his upbeat hit "In the Night."
Stapleton, who has written for dozens of country acts, won best country album for "Traveller."
"This is something you never ever dream of so I'm super grateful for it," he said.
Stapleton walked in with four nominations, including album of the year, but lost best country song to "Girl Crush."
Collaborative performances were one of the themes of the Grammys: Carrie Underwood sang with Sam Hunt; Ellie Goulding and Andra Day performed; and while Lovato, Legend, Luke Bryan and Tyrese sang with Lionel Richie to honor the icon.
Taylor Swift kicked off the Grammys with performance of her latest hit single, "Out of the Woods," while Kendrick Lamar collected his fifth trophy for the night. Lamar won best rap album for his sophomore effort, "To Pimp a Butterfly." It was the first award televised Monday.
"Hip-hop, Ice Cube, this for hip-hop, this for Snoop Dogg ...this for Nas. We will live forever, believe that," said Lamar, who also won best rap song, rap performance, rap/sung collaboration and music video earlier in the day.
Swift, who won two awards in the pre-telecast, wore a glittery one-piece with a long slit on each side of her body as she sang her pop smash. After welcoming the audience to the Grammys, Swift said, "But it's right now it's 1989. Put your hands up."
She then moved from the main stage to a smaller one to finish the song. Swift's wins included best music video for "Bad Blood" with Lamar and best pop vocal album for "1989."
Lamar walked into the Grammys with the most nominations — 11. This year, Lamar has a chance to make history: His Pharrell-produced "Alright" could be the first-ever hip-hop track to win song of the year in the Grammys' 58-year history. He also could be the first rapper to win album of the year since Outkast in 2004.
His "To Pimp a Butterfly" faces fierce competition for album of the year against "1989," Alabama Shakes' "Sound & Color," Stapleton's "Traveller" and the Weeknd's "Beauty Behind the Madness."
Swift's "Blank Space" and Sheeran's "Thinking out Loud" are up for record of the year, along with "Uptown Funk" by Mark Ronson and Bruno Mars, the Weeknd's "Can't Feel My Face," and D'Angelo and the Vanguard's "Really Love."
Meghan Trainor, who was nominated for two Grammys last year for "All About That Bass," won best new artist.
"Thank you to the Grammys, I love you so much," said a teary-eyed Trainor, who also thanked her parents and Epic Records CEO L.A. Reid.
Other winners include Mars, Ronson, D'Angelo, Skrillex, Diplo, Kirk Franklin and Jason Isbell.
LL Cool J is hosting the 58th annual Grammy Awards, airing live on CBS.
Associated Press 2016