Justice Dept. to meet with lawmakers as controversy over FBI source swirls 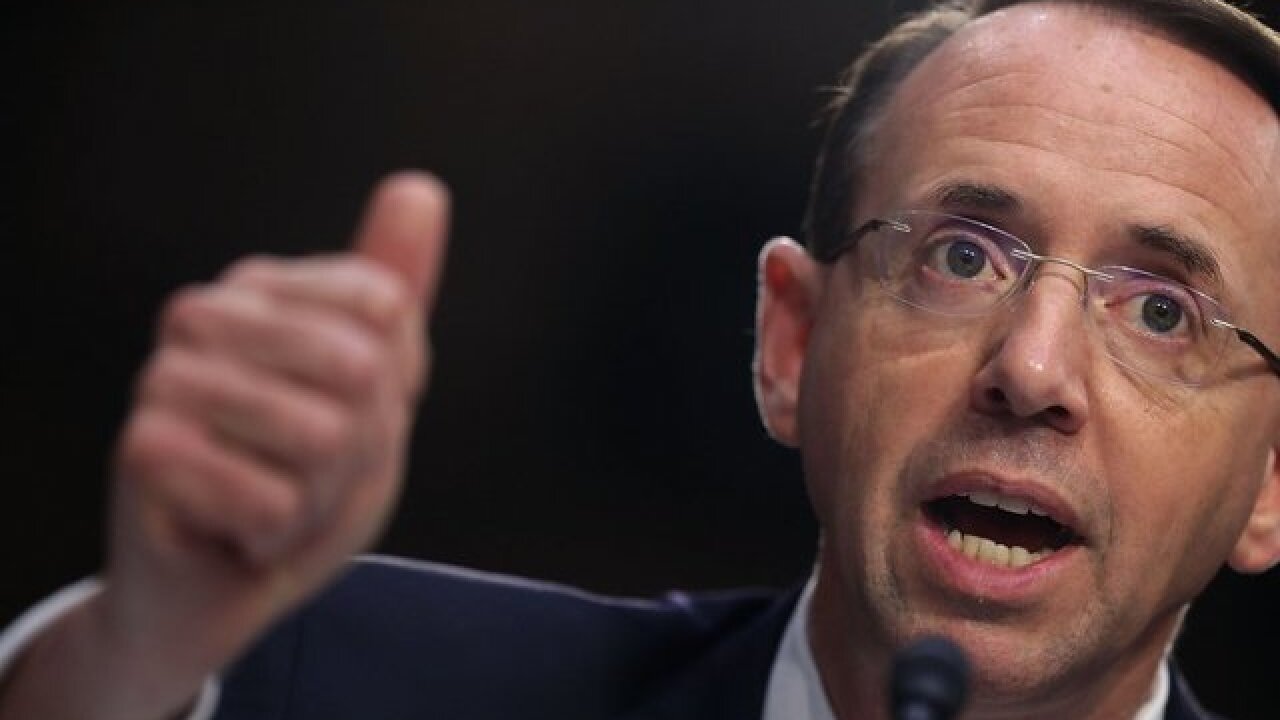 Top officials at the Justice Department, the FBI and the Office of the Director of National Intelligence agreed Monday to share highly classified information with lawmakers related to the Russia investigation amid an escalating controversy over the bureau's use of a confidential intelligence source during the 2016 presidential campaign.

White House press secretary Sarah Sanders said Monday that chief of staff John Kelly planned to "immediately" schedule a meeting with the officials and leaders of Congress to "review highly classified and other information they have requested."

But the statement -- vague enough to allow each side to claim victory -- did not fully settle the critical issue: whether the Justice Department would ultimately be forced to turn over the documents subpoenaed by House Intelligence Chairman Devin Nunes on the FBI source.

Sanders had said earlier that Deputy Attorney General Rod Rosenstein, FBI Director Christopher Wray and Director of National Intelligence Dan Coats were expected to gather at the White House on Monday afternoon for a discussion aimed at addressing congressional requests.

Rosenstein, Wray and several other officials were spotted leaving the White House just before 4 p.m. ET after over an hour inside. The Justice Department did not comment on the meeting or details of the agreement.

While Sanders and a source familiar with the meeting said it had been scheduled before a weekend of tweets from President Donald Trump, it took on a heightened public focus Monday afternoon.

On Sunday, Trump demanded via tweet the Justice Department "look into whether or not the FBI/DOJ infiltrated or surveilled the Trump Campaign for political Purposes."

His tweets prompted the Justice Department to ask its inspector general to expand its ongoing probe into the surveillance of former Trump campaign aide Carter Page to include a review of whether the FBI was politically motivated in its investigation of Russian meddling in the 2016 US election, Justice Department spokeswoman Sarah Isgur Flores said in a statement Sunday.

"If anyone did infiltrate or surveil participants in a presidential campaign for inappropriate purposes, we need to know about it and take appropriate action," Rosenstein said in the statement.

Some former Justice Department and FBI officials praised the move as deftly avoiding a ugly showdown, while others lamented that Rosenstein had failed to stand up to the President.

But tapping Inspector General Michael Horowitz to examine the issue appeared to de-escalate the controversy, at least for now.

"The President I think is grateful that the Department of Justice is going to have the inspector general look into it, and determine, and insure, that there was no surveillance done for political purposes against our campaign," Pence said.

How House Intelligence Chairman Devin Nunes and other Republicans on Capitol Hill handle the apparent agreement for another classified briefing remains to be seen.

Nunes said Sunday that he would refuse to meet with the Justice Department unless he was able to review documents related to the confidential FBI source.

Rep. Adam Schiff, of California, the ranking Democrat on the House Intelligence Committee, said he's unaware of what the administration briefing on the confidential source is about, whether they'll see documents and whether he'll be invited. He's concerned that the Justice Department may have "capitulated" despite its concerns that revealing the information could put lives at risk.

Schiff also expressed concern about Kelly or other White House officials at the upcoming meeting getting access to sensitive materials related to the ongoing investigation.

The New York Times and The Washington Post have reported the source spoke to Page and Trump campaign co-chairman Sam Clovis, as well as campaign adviser George Papadopoulos.

Clovis' attorney, Victoria Toensing, told CNN on Monday that the source had reached out to Clovis but her client "didn't know this guy from Adam."

"Russia didn't even come up," Toensing added, saying the meeting was about China and took place around the end of August or early September 2016.

Page tweeted what he indicated was an email from the source in July 2017, describing their interactions as "cordial," but CNN has not independently confirmed the email's authenticity.

Trump has previously suggested the intelligence source was "embedded" in his presidential campaign, but US officials have denied that claim to CNN.