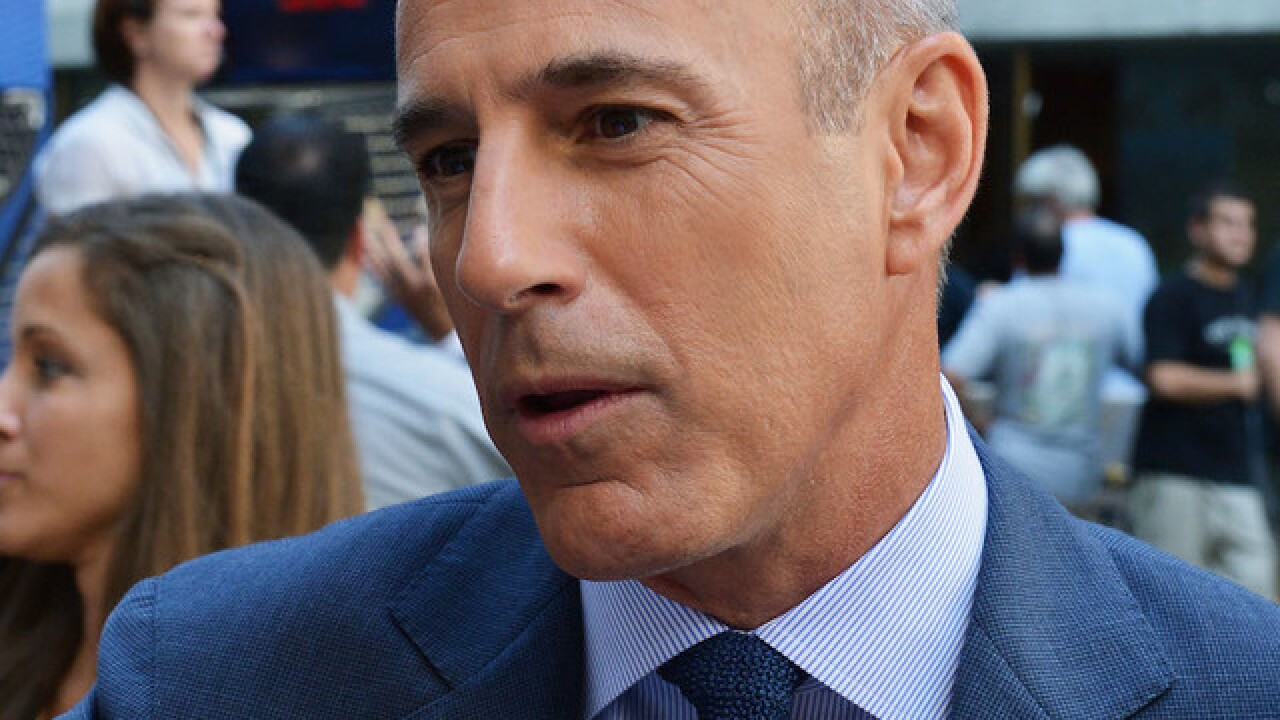 Jimmy Fallon, NBC's biggest late night star, had plenty to say when it came to the removal of the network's former morning show star, Matt Lauer, on Wednesday.

"The Rockefeller Center Christmas tree was lit tonight," Fallon said in his "Tonight Show" opening monologue. "Also getting lit tonight, the HR rep over at the 'Today Show.'"

Lauer was fired from NBC News Wednesday after an employee filed a complaint about "inappropriate sexual behavior in the workplace." Lauer has not commented on the allegations. Later on Wednesday, Variety published a story containing additional sexual harassment allegations against the "Today" show host.

"So if you were wondering about where in the world is Matt Lauer," Fallon said remarking on the former "Today" show segment, "he's probably at a bar with Charlie Rose."

Watch some of the late-night reactions:

"This morning my wife looked at her phone and went 'Oh my God, Matt Lauer!'" Kimmel said as he opened his show. "Which, of course, I assumed he was dead. So I guess this is better? I don't know."

Kimmel added that he really didn't know what would come next for Lauer.

"What happens now?" he asked. "I mean does he have to do an emotional sit down interview with himself?"

The ABC host mentioned that President Trump weighed in on Twitter about Lauer's firing. Trump tweeted: "Wow, Matt Lauer was just fired from NBC for 'inappropriate sexual behavior in the workplace.' But when will the top executives at NBC & Comcast be fired for putting out so much Fake News."

Kimmel said it made sense to him that Trump would comment on the situation.

"I'll tell you if anyone knows about inappropriate behavior in the workplace at NBC, it's Donald J. Trump," Kimmel said.

"By fake news do you mean more than a dozen women have accused Trump of improper conduct or sexual assault? Is that what you mean?" Colbert said on "The Late Show." "You don't get to comment. That is the pot calling the kettle at 3AM and asking what she's wearing."

Colbert also made plenty of jokes about Lauer during his monologue.

"We should have seen that Lauer had a strange obsession with women. I mean just look at any of his actual Halloween costumes: Dolly Parton, 'Baywatch' babe, Paris Hilton, J-Lo and Lucy from 'Peanuts.' Good grief," Colbert said showing pictures of costumes the host wore on "Today." "After looking at those I think he could have been fired for sexually harassing himself."

Over at Comedy Central's "The Daily Show," host Trevor Noah tried to keep count of all the allegations against men in media.

"How many news people is this now?" Noah said bringing up Lauer, Rose, and Bill O'Reilly. "Soon they'll have enough guys to start their own perv network."

As for NBC's Seth Meyers, the "Late Night" host had pre-taped Wednesday night's show on Tuesday night before the story broke.

"Due to the tree lighting we taped tonight's show yesterday," Meyers tweeted on Wednesday. "So if you're wondering why any of today's news is conspicuously absent this evening - now you know!"