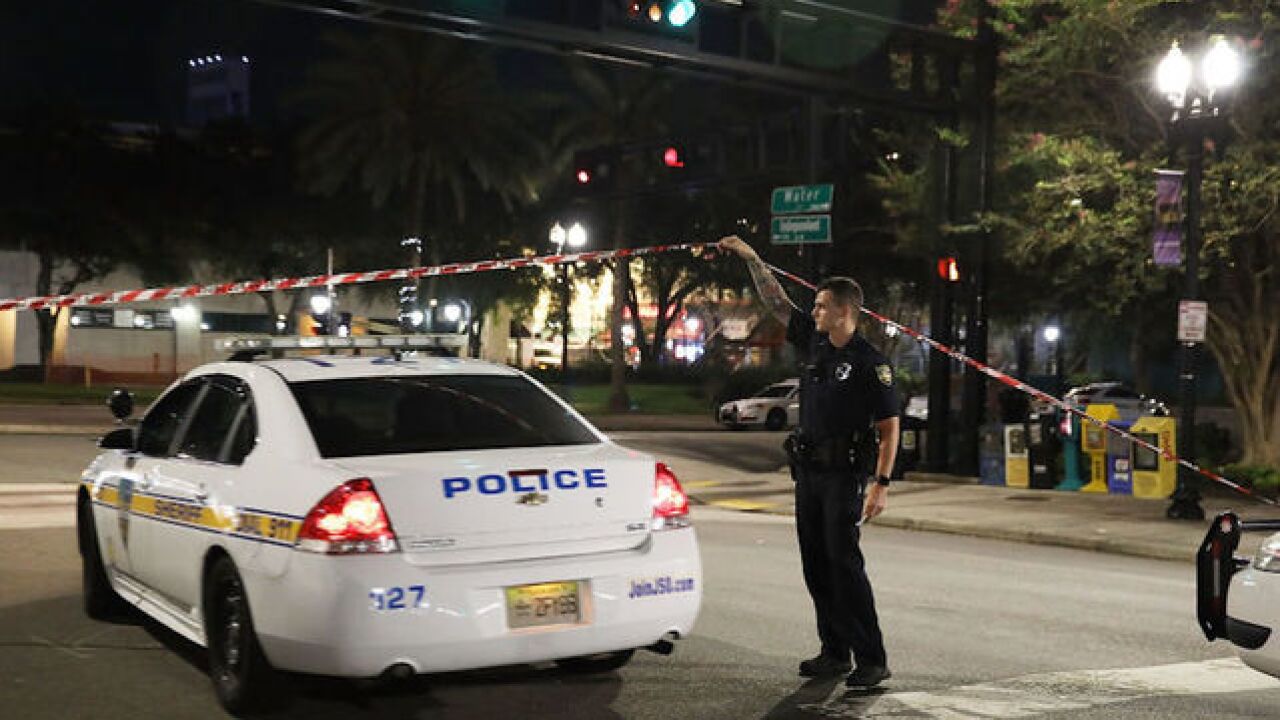 Image copyright 2018 Getty Images. All rights reserved. This material may not be published, broadcast, rewritten, or redistributed.
Joe Raedle
<p>A Jacksonville Sheriff's officer helps keep the perimeter secure as law enforcement investigates a shooting at the GLHF Game Bar which uses the same entrance as the Chicago Pizza place (seen in the center to the rear) at the Jacksonville Landing on August 27, 2018 in Jacksonville, Florida. The shooting occurred at the GLHF Game Bar during a Madden 19 video game tournament, with initial reports indicating three people dead, including the gunman, and several others wounded. </p>

The two gamers shot dead at a tournament in Jacksonville, Florida, on Sunday have yet to be officially identified but their names are being shared by those who knew them.

The Jacksonville Sheriff's Office has confirmed that two people were killed in the shooting at the GLHF Game Bar at the Jacksonville Landing Complex, an open-air marketplace with stores, bars and restaurants along the St. Johns River. Nine other people suffered gunshot wounds and two people were injured fleeing the area. The gunman then turned his weapon on himself.

While the sheriff's office has not identified the two who were killed, their names have been widely reported on social media by people who were at the bar, members of the gaming community and others.

One of the victims, Taylor "spotmeplzzz" Robertson was identified by his gaming sponsor, Dot City Gaming.

"We are shocked and deeply saddened by the senseless violence in Jacksonville and the tragic deaths of Dot City Gaming team member, Taylor "SpotMePlzzz" Robertson, and Eli "Trueboy" Clayton," the sponsor said in a two-part tweet.

"They were great competitors and well-loved members of the Madden community. Our thoughts and deepest sympathies go out to their families, loved ones, and all of those affected by this tragedy."

According to his player profile on EA Sports, Robertson was from Ballard, West Virginia. He was 27 years old.

The other victim, Eli "trueboy" Clayton, a former high school football player, was identified by the Calabasas High School football team in California.

"Our hearts are broken as we learned that former Calabasas Football player @True__818 (Elijah Clayton) was senselessly murdered today during the mass shooting in Florida. We send our love, condolences, and deepest sense of sorrow to Elijah's Family and Friends," the team tweeted.

Clayton, 22, was from Woodland Hills, California. He also went by "true," according to his EA Sports player profile.

PHOTOS: Click to see pictures from the mass shooting incident in Jacksonville

The two gamers were attending a tournament for competitive players of the football video game, Madden. The winners would go on to a higher level tournament in Las Vegas in October, where large cash prizes could be won.

Gunman David Katz, a 24-year-old gamer from Baltimore, Maryland, was in Jacksonville for the tournament. He used at least one handgun in the shooting, Jacksonville Sheriff Mike Williams said. Police have not released a possible motive.

'Worst day of my life'

Several of those who were injured posted their stories on Twitter.

Tony Montagnino, who goes by "G-Tech," said that he got struck twice in the lower body: "One went through. The other was lodged," Montagnino tweeted. "Still doesn't feel real. Saw a lot of things today I wish I hadn't seen. But I also saw a community of people rally around each other and a massive amount of support from friends and family to check on everyone. I'm thankful for everyone of you guys in the community. I love y'all."

Drini Gjoka, also known as "YoungDrini," called Sunday the "worst day of my life" on his verified Twitter page. Gjoka was struck in the thumb.

In another tweet, he said: "I will never take anything for granted ever again. Life can be cut short in a second."

Timothy Anselimo, or "olarry," was shot three times, according to his mother's Twitter page. On his verified Twitter profile, Anselimo said: "Devastated. No Words. Surgery In The Morning. Thanks To All Who Reached Out." His mom posted several photos of her son in the hospital with Gov. Rick Scott and a photo of her son's bloodied backpack.