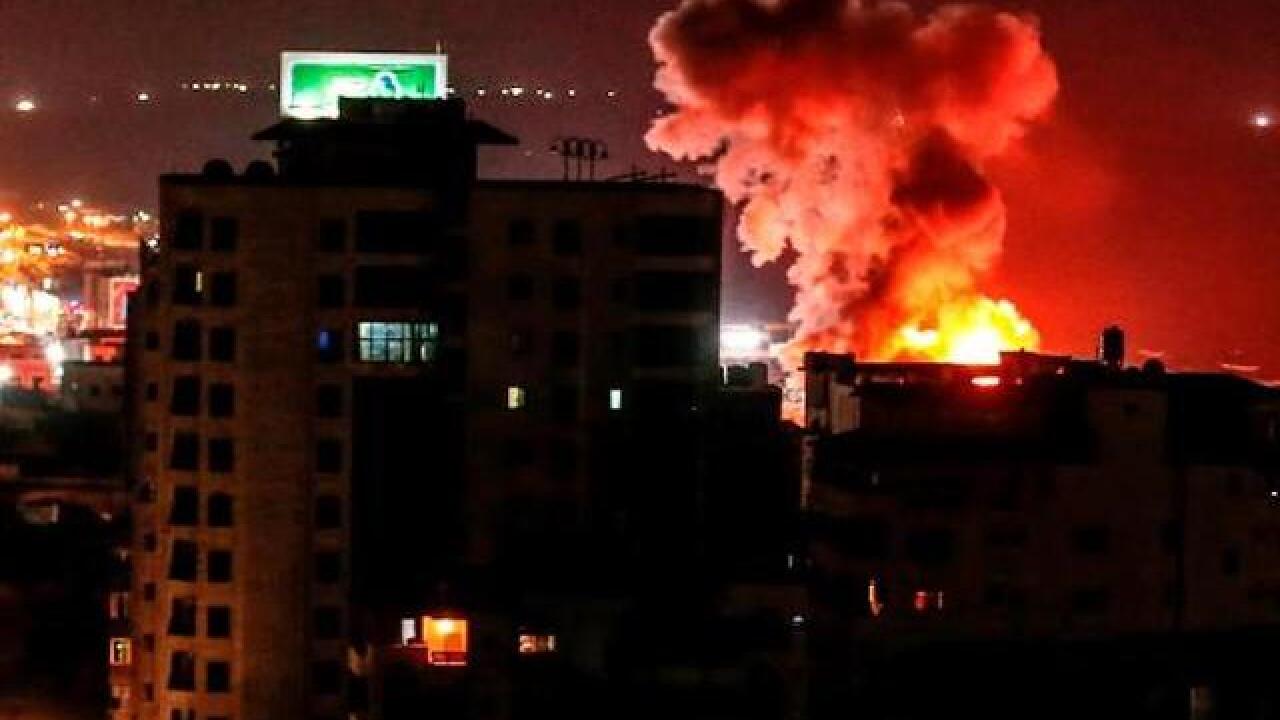 Israel has launched air strikes on Gaza after Hamas militants fired rockets into its territory amid efforts to achieve a long-term ceasefire agreement.

The fighting Wednesday left three Palestinians dead in Gaza, including a pregnant mother and her young daughter, according to the Palestinian Ministry of Health, with injuries reported in Israel and Gaza.

According to the Israel Defense Forces (IDF), at least 100 rockets were launched from Gaza toward Israel, with rocket alarms ringing into the early hours of the morning. Twenty rockets were intercepted by Israel's Iron Dome aerial defense system, while most others landed in open fields in southern Israel.

Three people were taken to the hospital with light to moderate injuries when four rockets landed in Sderot adjacent to Gaza, a spokesman for Magen David Adom, Israel's emergency response service, said.

Following the rocket launches, the Israeli air force struck more than 140 military targets across 20 sites in Gaza, including a factory for manufacturing facilities, training complexes, a maritime tunnel shaft, and other sites, according to the IDF.

The Palestinian Ministry of Health identified the deceased as 34-year-old Ali Ghandour, 23-year-old Inas Khamash, and her 18-month-old daughter, Bayan Khamash. Twelve others were injured, the Ministry said.

Warning of the imminent dangers of continued escalation, UN Special Coordinator for the Middle East Peace Process Nickolay Mladenov tweeted a statement early Thursday morning: "Our collective efforts have prevented the situation from exploding until now. If current escalation however is not contained immediately, the situation can rapidly deteriorate with devastating consequences for all people."

The escalation came after Hamas leaders traveled to Cairo in recent days to discuss the possibility of a long-term ceasefire with Israel.

Khalil al-Hayya, a member of Hamas' political bureau, said in a televised Al Jazeera interview Wednesday that the general layout of a ceasefire agreement was in "advanced stages."

Israel's Minister of Transportation, Israel Katz, said over the weekend on Twitter, "The situation in Gaza is reaching a decision -- or an arrangement or a war." Katz said he would support an Egyptian-backed agreement that provided aid and rehabilitation to Gaza.

But on Sunday, following a security cabinet meeting to discuss the situation in Gaza, a readout of the meeting from the Prime Minister's Office said only that the IDF Chief of Staff had briefed the cabinet on the latest developments in Gaza. No decisions had been made.

Earlier Wednesday, an Israeli tank struck a Hamas post in northern Gaza, after gunfire from Gaza damaged an Israeli engineering vehicle near the border fence.

In a separate incident on Tuesday, an Israeli tank struck a Hamas military post in northern Gaza, killing two militants. Israel carried out the strike after the IDF claimed Hamas snipers fired at Israeli security forces near the border. Hamas says the two men were taking part in an exercise and did not fire at Israel.

Hamas vowed to avenge the deaths, prompting Israel to shut down roads near Gaza for security reasons.

Efforts to achieve a comprehensive ceasefire come after months of violence along the Israel-Gaza border.

In late-March, Palestinians began weekly protests dubbed the "Great March of Return" along the border fence. More than 160 Palestinians have been killed by Israeli fire in the protests, according to the Palestinian Ministry of Health.

Israel has accused Hamas, which controls Gaza, of orchestrating the protests, during which the IDF says rioters have thrown Molotov cocktails, burned tires, and hurled grenades. An Israeli soldier was killed by sniper fire from Gaza in late-July, the first soldier killed along the Gaza border since the 2014 war.

Israel has maintained a land, sea and air blockade on the coastal enclave since June 2007, when Hamas took over Gaza.

The blockade effectively locks the more than two million Gaza residents inside the territory and is seen by the UN as a major contributor to the deterioration of living conditions there. Israel says it's a necessary security measure.