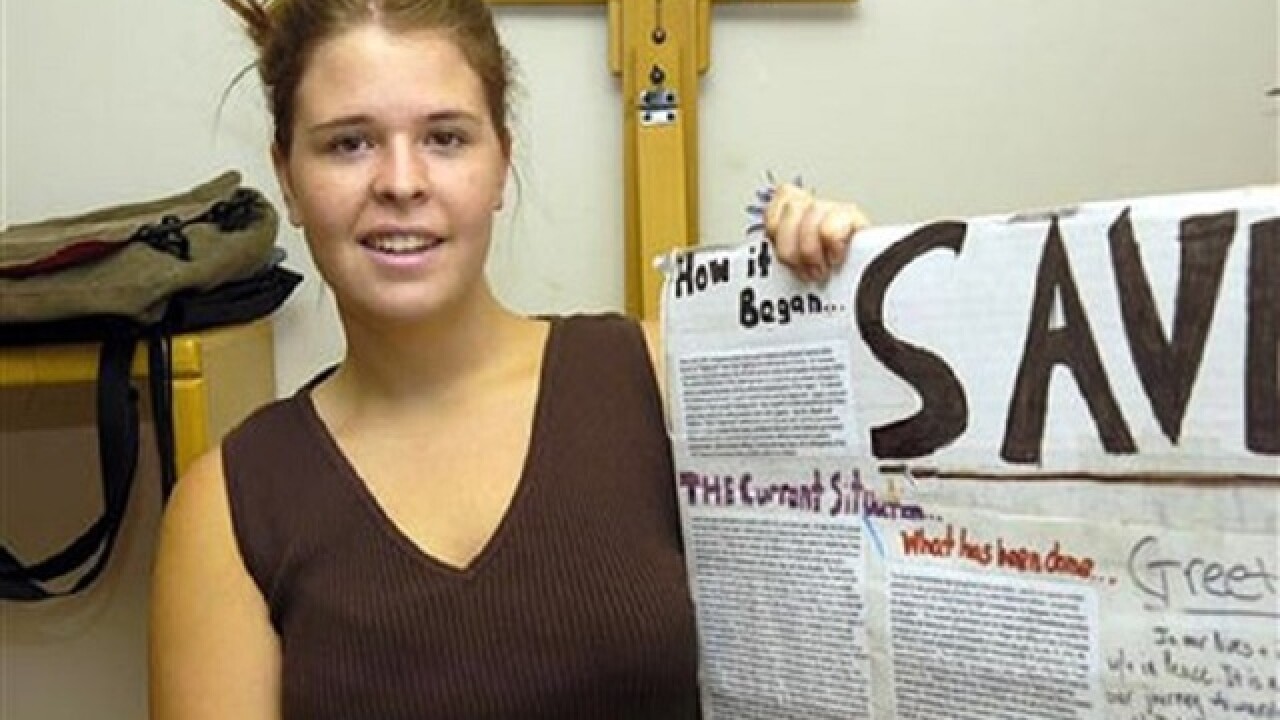 WASHINGTON (AP) — The wife of a senior Islamic State leader who was killed in a U.S. raid last year has been charged in federal court with holding American Kayla Mueller hostage and with contributing to the aid worker's death, the Justice Department said Monday.
Nisreen Assad Ibrahim Bahar, also known as Umm Sayyaf, admitted after her capture last May that she and her husband kept Mueller captive along with several other young female hostages, according to an FBI affidavit filed in the case. U.S. officials have said that while in custody, Mueller was repeatedly forced to have sex with Abu Bakr al-Baghdadi, the leader of the Islamic State group
The criminal complaint, filed by federal prosecutors in Alexandria, Virginia, charges Umm Sayyaf with conspiracy to provide material support to a foreign terror organization, resulting in death.
The case was brought one year after Mueller was confirmed dead by her family and the Obama administration, though it's not clear when or if Umm Sayyaf will be brought to the U.S. to stand trial.
The 25-year-old Iraqi woman, who was captured last year, is currently in Iraqi custody and facing prosecution there. Her husband, Abu Sayyaf, a former Islamic State minister for oil and gas, was killed last May in a Delta Force raid of his compound.
"We fully support the Iraqi prosecution of Sayyaf and will continue to work with the authorities there to pursue our shared goal of holding Sayyaf accountable for her crimes," Assistant Attorney General John Carlin, head of the Justice Department's national security division, said in a statement.
"At the same time, these charges reflect that the U.S. justice system remains a powerful tool to bring to bear against those who harm our citizens abroad. We will continue to pursue justice for Kayla and for all American victims of terrorism," he added.
Mueller, from Prescott, Arizona, was taken hostage with her boyfriend, Omar Alkhani, in August 2013 after leaving a Doctors Without Borders hospital in Aleppo, Syria, where he had been hired to fix the Internet service for the hospital. Mueller had begged him to let her tag along because she wanted to do relief work in the war-ravaged country. Alkhani was released after two months, having been beaten.
Mueller was transferred in September 2014 along with two Kurdish women of Yazidi descent from an Islamic State prison to the Sayyafs, according to the FBI affidavit, which says the couple at times handcuffed the captives, kept them in locked rooms, dictated orders about their activities and movements and showed them violent Islamic State propaganda videos.
After her capture last year, the affidavit says, Umm Sayyaf admitted she was responsible for Mueller's captivity while her husband traveled for Islamic State business.
She said that al-Baghdadi would occasionally stay at her home and that he "owned" Mueller during those visits, which the FBI says was akin to slavery.
The Justice Department complaint echoes earlier assertions from U.S. intelligence officials, who had told Mueller's family that their daughter was repeatedly forced to have sex with al-Baghdadi.
"The defendant knew how Ms. Mueller was treated by Baghdadi when Ms. Mueller was held against her will in the defendant's home," the affidavit states.
A Yazidi teenager who was held with Mueller and escaped in October 2014 said al-Baghdadi took Mueller as a "wife," repeatedly raping her when he visited. The 14-year-old Yazidi girl made her way to Iraqi Kurdistan, where she talked to U.S. commandos in November 2014. Intelligence agencies corroborated her account and American officials passed it on to Mueller's parents in June 2015.
Associated Press 2016