Obama to deliver final State of the Union 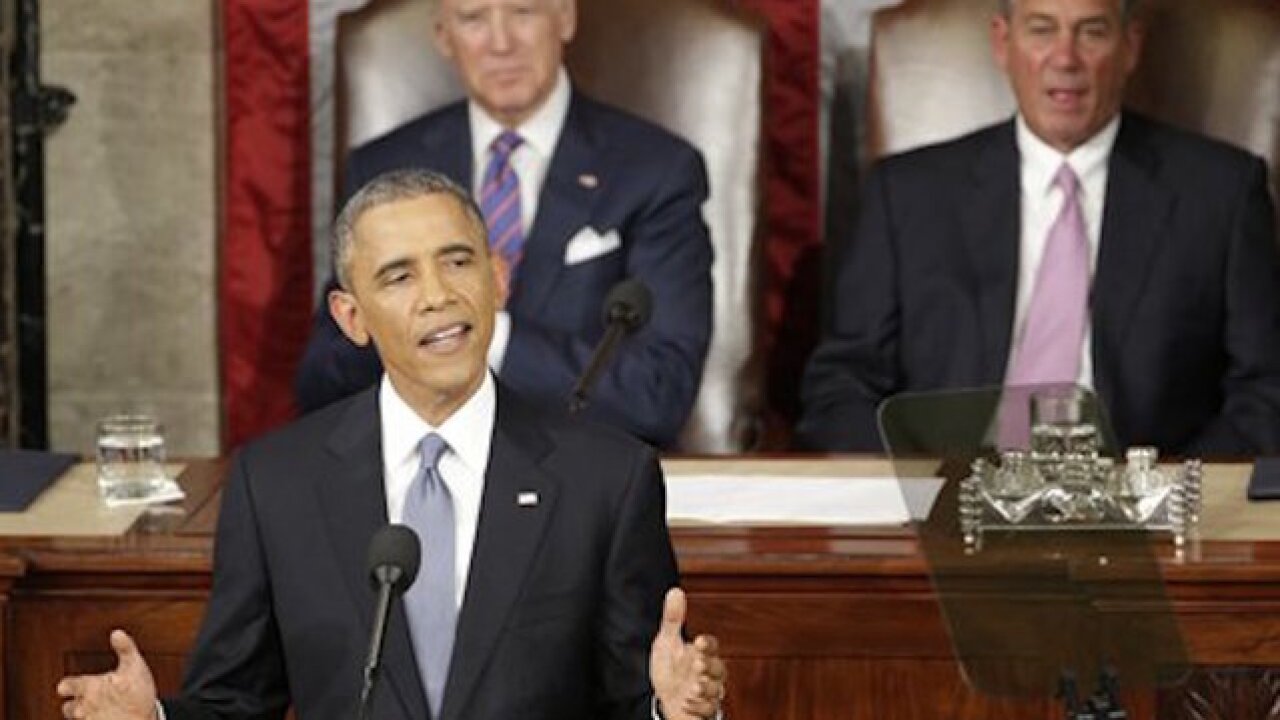 Copyright Associated Press
J. Scott Applewhite
<p>FILE - In this Jan. 20, 2015 file photo, President Barack Obama gives his State of the Union address before a joint session of Congress on Capitol Hill in Washington as Vice Presient Joe Biden and House Speaker John Boehner of Ohio listen. Out of time to push a new legislative agenda, a battle-hardened President Barack Obama will look straight past Congress and to the American people in his final State of the Union address, aiming to define his presidency and his legacy before others can do it for him. (AP Photo/J. Scott Applewhite)</p>

WASHINGTON (AP) — Out of time to push a new legislative agenda, President Barack Obama will look past Congress and to the American people in his final State of the Union address, aiming to define his presidency and his legacy before others can do it for him.

For his seventh address, Obama plans to skip the traditional list of grand proposals, new policies and presidential appeals for new laws in favor of a broad overview of what he has accomplished since 2009 and what is undone in his final year in office. Aides said the president on Tuesday night will give his assessment of what the country looks like in 2016 and the direction he hopes it will take in the future.

To the extent he can, Obama will try to give a burst of energy to initiatives he is hoping to push past beyond the life of his administration.

Advisers who met with Obama as he readied his recent executive actions on gun control said the president gave this guidance: "Everything this year should be infused with a sense of possibility" and "don't take the foot off the gas pedal."

Despite his inevitable slide into lame-duck status and the partisan politics of the election year, Obama is emboldened by recent successes that formed one of the most productive stretches in his presidency.

Over the past year, Obama has reached a nuclear deal with Iran, relaunched diplomatic relations with Cuba, secured a global climate pact and an Asia-Pacific trade deal, and negotiated a budget deal with the Republican-led Congress. Unemployment has fallen to 5 percent and renewed confidence in the economy has led the Federal Reserve to start raising interest rates.

Obama's chief of staff, Denis McDonough, said Obama planned in his speech to cite those achievements to argue that "we've brought America back."

While Obama wants to keep the momentum going, the presidential campaign may drown him out. The White House scheduled this year's speech earlier than usual, in part to ensure Obama had room to maneuver before voters get their first say — the Iowa caucuses on Feb. 1.

To the dismay of some in his party, Obama doesn't plan to use the address as an opening argument for Democratic candidates in the November election. White House officials said the president would have ample opportunities to frame the campaign.

Still, anything Obama says or does in an election year raises the political heat. For example, Republicans have seized on Obama's unilateral moves to tighten gun policies, a topic for Tuesday's speech, as the latest example of why voters cannot trust Democrats.

"The president hasn't had a problem getting attention for what he's proposed as important issues we should be focused on," said Jen Psaki, the White House communications director. She said those issues often have spilled over into the campaign. "Because of his decision to be bold, we fully anticipate that will continue."

Obama's best prospects for achievements this year are on issues where he and Congress at least partially agree. Central to his speech will be a renewed call for a criminal justice overhaul and for approval of the Asia-Pacific trade agreement, which many Republicans support.

He will face a less receptive crowd when it comes to foreign policy and homeland security. Republicans and even many Democrats say his strategy for fighting the Islamic State group is ineffective.

Obama insists he has not abandoned a campaign promise to close the Guantanamo Bay prison, although GOP opposition has made that difficult to fulfill. Last year the White House said Obama would send Congress a new plan for closing the detention center, but there have been seemingly endless delays.

Republicans have urged the president to leave Guantanamo, guns and other contentious issues out of his speech if he is serious about wanting to make progress before his term ends.

"He has a decision to make," Sen. Rob Portman, R-Ohio, said in an interview. "Is he going to run his last year of his presidency in a political manner or is he actually going to focus on getting stuff done?"

Added Sen. Lamar Alexander, R-Tenn.: "If he will focus on what he agrees on with Congress instead of what we disagree on, there's quite a bit we could get done in 2016."

Republican Gov. Nikki Haley of South Carolina discussed as a potential vice presidential candidate, will give her party's response to Obama's address.

Obama plans visits to Nebraska on Wednesday and Louisiana on Thursday to make the case for his priorities.