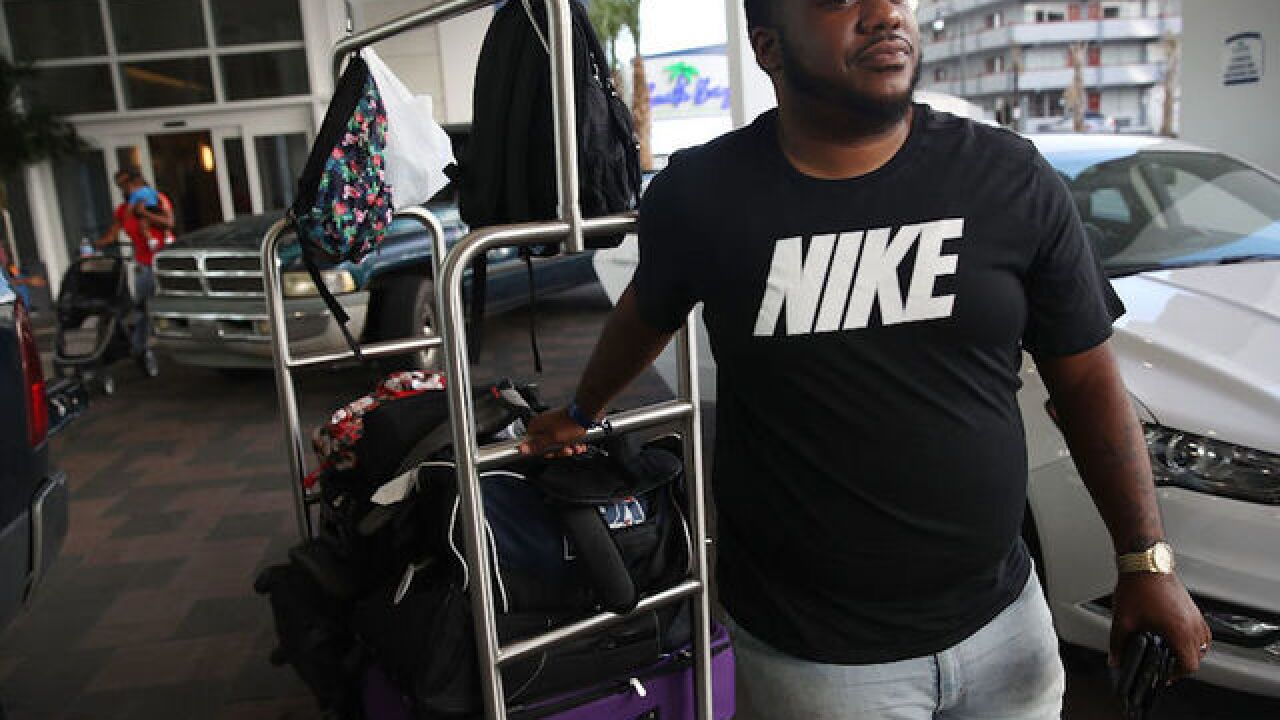 Image copyright 2018 Getty Images. All rights reserved. This material may not be published, broadcast, rewritten, or redistributed.
Joe Raedle
<p>Marcus Thurston and his family cut short their vacation and evacuate the South Bay Inn and Suites hotel ahead of the arrival of Hurricane Florence on September 11, 2018 in Myrtle Beach, South Carolina. Florence is expected to make landfall by late Thursday to near Category 5 strength along the Virginia, North Carolina and South Carolina coastline. </p>

It's going to be a very tough week for travel as Hurricane Florence bears down on the East Coast of the United States.

The powerful storm is expected to make landfall in the Carolinas late Thursday, and nearly 1.5 million people are under mandatory evacuation orders in North Carolina, South Carolina and Virginia.

Airlines have already extended waivers and advisories for travelers with itineraries involving airports in the predicted path of the storm.

"[We] anticipate that starting late tomorrow morning, once airlines have a clearer picture of what airports will be impacted," Orsi said via email.

Motor vehicle traffic along evacuation routes will be heavy, with traffic patterns reversed on some major roadways to ease congestion heading away from the coast.

Hotel availability is limited along some of the key evacuation routes in South Carolina, the Greenville News reported Monday.

Availability is expected to shift as guests with bookings unrelated to the approaching storm cancel their plans, making room for evacuees fleeing coastal areas.

Pet policies vary from property to property, although at least one South Carolina hotel operator told the Greenville News that pet restrictions could loosen depending on circumstances.

BringFido.com is a good resource for guests looking for pet-friendly accommodations.

Amtrak is modifying East Coast service on a number of routes from Wednesday, September 12, through Sunday, September 16. Many routes in the affected areas will be canceled or operate on modified schedules during some or all of that period.

Service alerts, passenger notices and other announcements are posted at Amtrak.com/alerts. Passengers can sign up for delay alerts online.

Amtrak will waive charges for reservation changes for the affected period and routes. Call the reservations center at 800-USA-RAIL.

Cruise ships have also started rerouting ships that were scheduled to stop this week in Bermuda, according to website CruiseCritic.com. Bermuda is situated about 650 miles (1,050 km) east of Cape Hatteras, North Carolina.

Fort Sumter National Monument, located in South Carolina's Charleston Harbor, is closed until further notice due to the hurricane threat, according to the National Park Service.