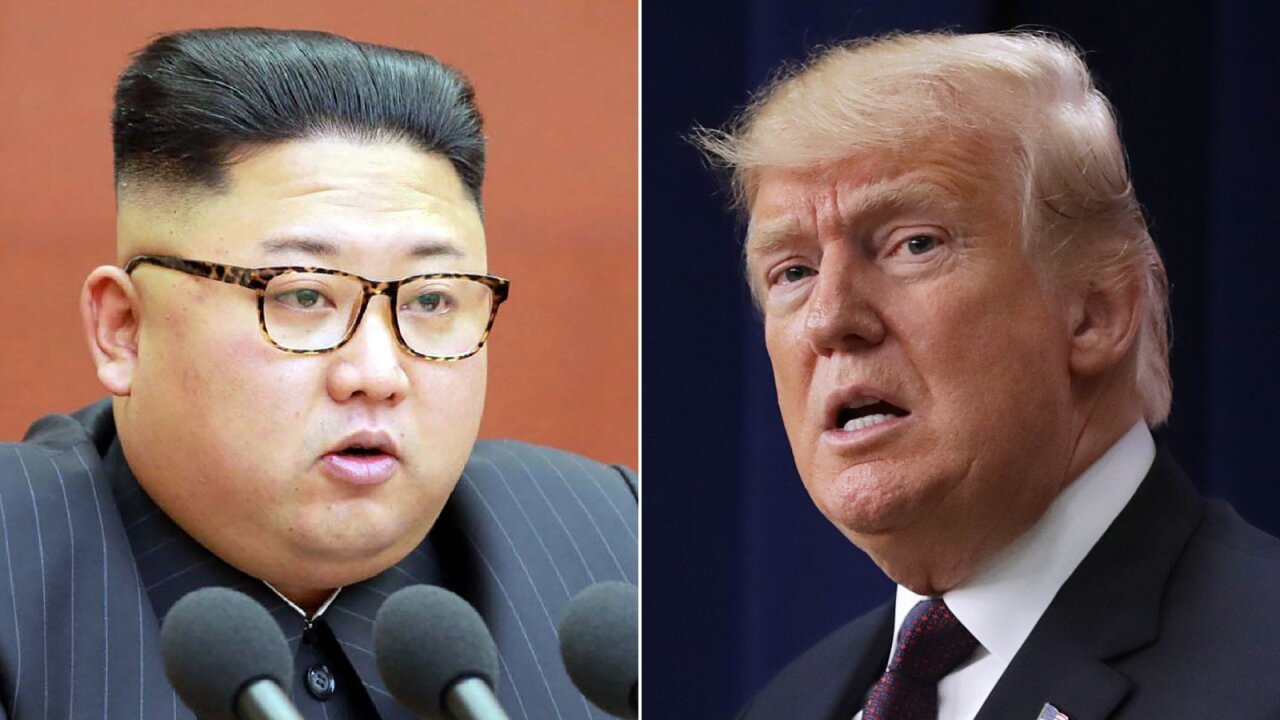 President Donald Trump, with peace on the mind and "great chemistry" as his ace in the hole, travels to Vietnam today to continue courting North Korea's despotic leader into a nuclear deal.

What began eight months ago in Singapore as an audacious first-ever grip-and-grin between a sitting US president and North Korean leader has yet to yield discernible strides in the effort to rid Kim Jong Un of his nuclear weapons. Expectations this time are low that the two leaders will forge significant progress.

Nevertheless, Trump is traveling to Hanoi hoping the sequel to his first meeting will generate at least some evidence his diplomatic gambit is working. He's already cited the absence of nuclear and missile tests as proof of improved relations. But North Korea will need to commit to further steps if Trump hopes to quell persistent doubt -- including within his own administration -- that the gamble is worthwhile.

It is not yet clear what kind of agreement Trump and Kim will reach during their talks. Representatives from Washington and Pyongyang traveled to Hanoi ahead of their leaders this week to hammer out the details of a joint declaration to be signed during the summit.

Potential outcomes could include agreements from North Korea to allow inspectors into certain nuclear sites or even a decision to close the expansive Yongbyon nuclear research center . At a minimum, US officials hope for a more defined road map that would lead North Korea to give up its nuclear weapons.

In exchange, Trump could offer to begin moving toward formal diplomatic relations through the exchange of liaison officers. Or he could agree to ending the Korean War, an attractive prospect for a President intent on winning a Nobel Peace Prize .

But expectations are low, and the US has appeared to abandon an earlier request that the second summit result in North Korea agreeing to provide a full accounting of its nuclear program. Inside the White House, some advisers have privately raised concerns that Trump could offer too much to Kim at the summit, which he insisted upon after his first meeting in June garnered widespread media attention.

Secretary of State Mike Pompeo said Sunday he was "hopeful" that Trump and Kim "will make a big step towards" the denuclearization of North Korea during their second summit, but declined to say what kind of agreement might be reached.

"I don't want to get into the details of what's being proposed, what the offers and counteroffers may be. But a real step, a demonstrable, verifiable step is something that I know President Trump is very focused on achieving," Pompeo said in an interview on CNN's "State of the Union."

Trump departs Washington at what could be a fateful moment for his presidency: special counsel Robert Mueller is expected to soon conclude his investigation into Russian election meddling, a landmark moment after two years of intense speculation about his work.

Initially expected to arrive as early as this week, a Justice Department official said on Friday the report would not be delivered while Trump is overseas -- a relief to some aides, but leaving the looming specter of the report in place while Trump is embarking upon high-wire nuclear talks.

The submission of the Mueller report won't be the only investigative subplot unfolding in Washington while Trump is on the other side of the globe working to convince Kim to abandon his nuclear weapons. Michael Cohen, the President's former personal lawyer and fixer, is set to testify before the House Oversight Committee on Wednesday , hours before Trump's first meetings with Kim get underway.

Cohen's testimony will proceed in the overnight hours in Vietnam, though one White House official suggested there was little anyone could do to prevent Trump from staying up late in his hotel room to watch.

It won't be the first time the various investigations that have dogged Trump flared up while he is overseas. Days before he departed for his first trip abroad as president in 2017, the Justice Department named Mueller as special counsel. A year later, as Trump was preparing to meet Russian President Vladimir Putin in Finland, the Justice Department announced it was indicting 12 Russian nationals on charges of hacking Democrats' emails. And in December, Cohen pleaded guilty to a charge from Mueller's office days before Trump attended a leaders' summit in Argentina.

Trump has complained about the swirl of investigations around having an undermining effect with fellow world leaders. And he's used his North Korea efforts as evidence his presidency is proceeding apace, even as he's beset by persistent legal questions.

In the eight months since his first encounter with Kim in Singapore , Trump has repeatedly claimed his diplomatic endeavors have led to tremendous strides toward reducing tensions with North Korea and convincing its young, iron-fisted ruler to relinquish his country's nuclear weapons. As he returned from Singapore, Trump falsely claimed "there is no longer a nuclear threat" from North Korea and has since painted a rosy picture of the status quo.

He's cited the improbable personal relationship he developed with Kim, a dictator 30 years his junior, as the nucleus of the diplomatic effort. The second summit was arranged through effusive letters transmitted between Washington and Pyongyang, some of which the President carried with him to show both his friends and political adversaries.

But while the diplomatic opening between the US and North Korea has quelled the red-hot rhetoric between Trump and Kim and prompted North Korea not to carry out any provocative nuclear or ballistic missile tests, the hermit kingdom has taken no concrete and verifiable steps toward dismantling its nuclear program.

Instead, North Korea has taken its efforts underground, quietly pressing forward with its nuclear and ballistic missile programs without the public-facing testing that for decades has swiveled the world's attention to the country's threatening nuclear milestones. Analysts have repeatedly warned that maintaining the status quo will simply result in a bolstered North Korean nuclear arsenal, and perhaps one with the capability to strike the United States -- if it doesn't already have that capability, as some nuclear analysts suspect.

Trump, though, appears to increasingly be pursuing diplomacy for its own sake, content with being credited for a reduction in tensions with North Korea and the vanishing of North Korea's provocative testing. Despite North Korea's ongoing development of its nuclear and ballistic missile programs, Trump has said he is in "no rush" to clinch the goal of North Korean denuclearization.

Yet the President's own advisers have taken a different tack, with one senior administration official telling reporters on a briefing call organized by the White House that "we actually need to move very quickly in this process."

"And I think we need to move in very big bites," the official said. "We are not looking to have incremental steps as a key driver of this process."

Still, as Trump approaches his second summit with Kim, US officials say they do not know whether North Korea has decided it is in its interests to denuclearize.

The backdrop to the talks remains the US intelligence community's assessment that North Korea is unlikely to ever agree to abandon its nuclear program, believing it is critical to the regime's survival. Director of National Intelligence Dan Coats told lawmakers during a public hearing last month it was "unlikely" that North Korea would "completely give up its nuclear weapons and production capabilities because its leaders ultimately view nuclear weapons as critical to regime survival."

Pompeo on Sunday downplayed those assessments as merely reflective of a "fact pattern" and "the history of North Koreans making promises and making commitments, lying, taking American money."

"This administration is not going to do that," Pompeo said. "And I'm very hopeful that we will make a substantial step towards achieving the full denuclearization in a verifiable way in North Korea."

That assessment infuriated the President, who has fretted those words will serve to undercut his efforts to sell his second summit with Kim as a success. Yet it remains the unanimous view of the US intelligence community. And even among the President's top foreign policy advisers, there are significant doubts about the direction of the talks with North Korea and ever-present concerns that Trump is over-eager for a deal and could make too many concessions.

Pressed late last week about the chances the diplomatic engagement will ultimately prove successful, a senior administration official refused to weigh in on the odds.

"The President's optimistic," the official said, repeating the sentence again when asked whether they too were optimistic.

While the White House has been busy lowering expectations -- with White House press secretary Sarah Sanders even claiming that the mere existence of a second summit is a victory -- North Korea experts have made clear a second summit must result in concrete achievements in order to be considered successful.

"If this second meeting does not produce actual tangible steps -- whether it's on peace, on normalization, or on denuclearization -- I think it will widely be seen as a failure and will really raise questions about whether this process has ended," said Victor Cha, the Korea Chair at the Center for Strategic and International Studies.

US negotiators had pressed for a summit in Vietnam in the hopes the former US foe could illustrate for Kim the potential for economic resurgence if he loosens his anti-America stance. Still a communist nation, Vietnam has nonetheless managed to develop into one of Southeast Asia's strongest economies, making its example appealing to American officials.

Trump has long sought to highlight for Kim the benefits of economic improvement, including showing him a faux movie trailer he'd commissioned during their summit in Singapore. Then, Trump emphasized North Korea's geographical features, including beaches he said were beautiful enough to build condominiums on. This time, Trump is underscoring the strategic location of the country, between South Korea, China and Russia, that could prove lucrative should Pyongyang chose to join the international community.

Initially, the US had pressed for a summit at the seaside resort Da Nang, where Trump visited in 2017 to attend a summit of Asian leaders. But North Korean officials insisted upon Hanoi, where they maintain an embassy. The capital is also situated closer to China -- meaning Kim had to travel fewer miles in his heavily armored train to reach the destination.