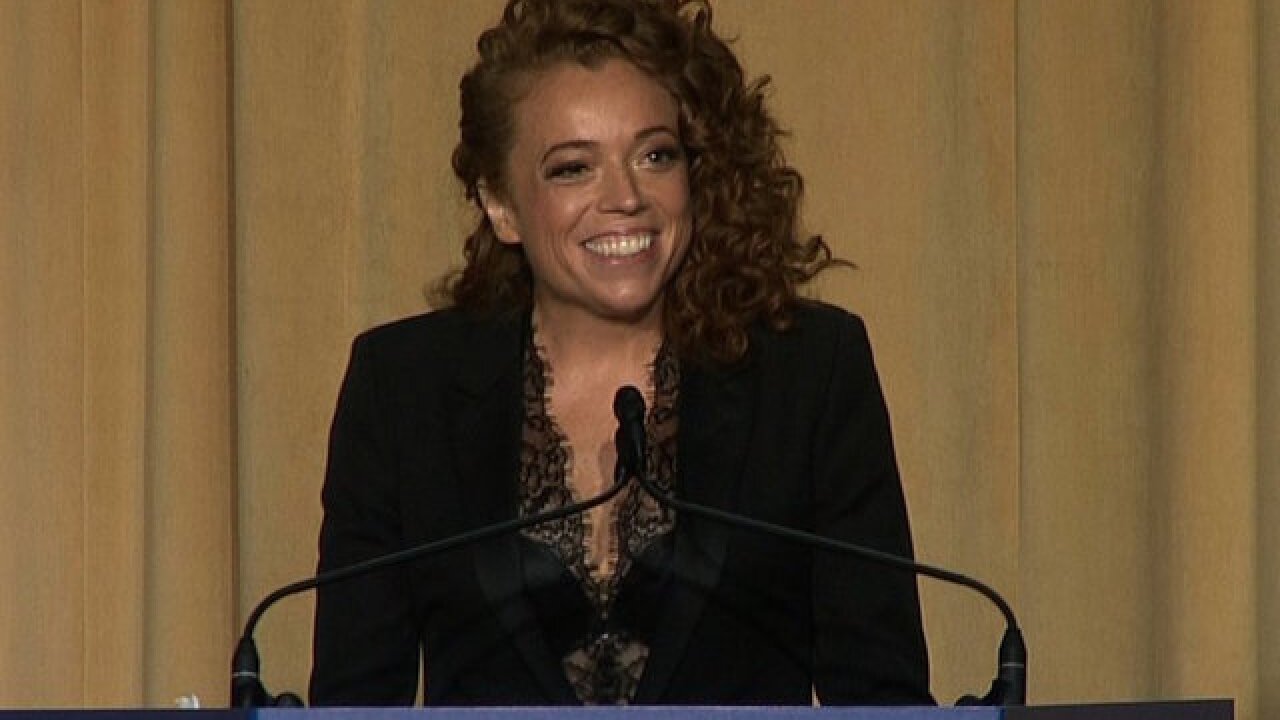 The "winners," so to speak, might be Wolf ancd President Trump. Wolf's name is trending all over social media just a few weeks before the launch of her new Netflix show. And Trump is embracing Wolf as a foil -- a symbol of liberal Hollywood elitism.

Trump said on Twitter Sunday morning that she "bombed."

That might be true in Washington -- where some prominent journalists joined Trump administration aides in criticizing Wolf's raunchy jokes.

But other writers, activists and comedians defended Wolf for roasting both the administration and the media.

Wolf seemed happy about the outcome. When former press secretary Sean Spicer tweeted that the dinner "was a disgrace," Wolf replied, "Thank you!"

The stand-up act is now an object of partisan warfare. Charges of hypocrisy are flying fast, with commenters on the right blasting liberal intolerance and those on the left mocking conservative victimization.

Here's a look at the varying reactions to her roast:

Conservative activists said Wolf, who was selected to perform by the correspondents' association, showed the media's true colors with X-rated satire and personal swipes at press secretary Sarah Sanders, counselor to the president Kellyanne Conway, and others in attendance.

Many Washington journalists joined the activists in criticizing Wolf's comments about Sanders, particularly the jabs at her physical appearance.

Wolf responded overnight on Twitter by saying "all these jokes were about her despicable behavior," not looks.

Other attendees suggested some of Wolf's material was needlessly cruel. There were also strong objections to her material about abortion.

White House aide Mercedes Schlapp and her husband Matt Schlapp, the chairman of the American Conservative Union, said they walked out early.

"Enough of elites mocking all of us," Matt Schlapp tweeted.

Taking the other side of the argument were a variety of writers, liberal activists and comedians.

"Good lord people, it was a stand-up act. Get over yourselves. Or stop inviting comics and then acting shocked that they said something edgy," MSNBC analyst Matthew Miller tweeted.

"If you are a Trump supporter or member of his administration and aren't willing to condemn his vulgar and mean spirited behavior every day, then i don't want to hear what you have to say about a comedian," he wrote.

Wolf, a stand-up performer who previously contributed to "The Daily Show with Trevor Noah," is trending just ahead of the launch of he half-hour talk show premiering on Netflix next month.

Both Wolf's fans and detractors seemed to agree that it was a shocking performance, destined to go down in correspondents' dinner history.

CNN analyst Joan Walsh compared it to Stephen Colbert's 2006 stand-up act at the dinner, when Colbert challenged then-president Bush and members of the media.

"The crowd is scandalized (even some liberals), but a lot of people see it as the right reaction to the scandal that is @realDonaldTrump," Walsh tweeted.

The controversy even renewed debate about the purpose of the black-tie affair, where members of the press corps celebrate journalism and mingle with sources.

Peter Baker of The New York Times, which pointedly does not participate in the dinner, tweeted afterward, "Unfortunately, I don't think we advanced the cause of journalism tonight."

CNN's Jeff Zeleny replied and agreed with Baker: "So much important and amazing journalism this year -- that should be the focus, when truth matters and is needed more than ever. It was an embarrassment in the room and surely to the audience at home."

Meg Kinnard, a reporter with The Associated Press, expressed a similar concern.

If the dinner "did anything tonight, it made the chasm between journalists and those who don't trust us, even wider. And those of us based in the red states who work hard every day to prove our objectivity will have to deal with it," she tweeted.

But there was a fierce response on social media from people who said, in essence, the correspondents association hired an edgy comedian. What were you expecting?

Wolf herself quipped about three minutes into the set, "Yeah, shoulda done more research before you got me to do this."

The crowd laughed, not knowing what was to come.