Heart attacks are on the rise among young women, study shows 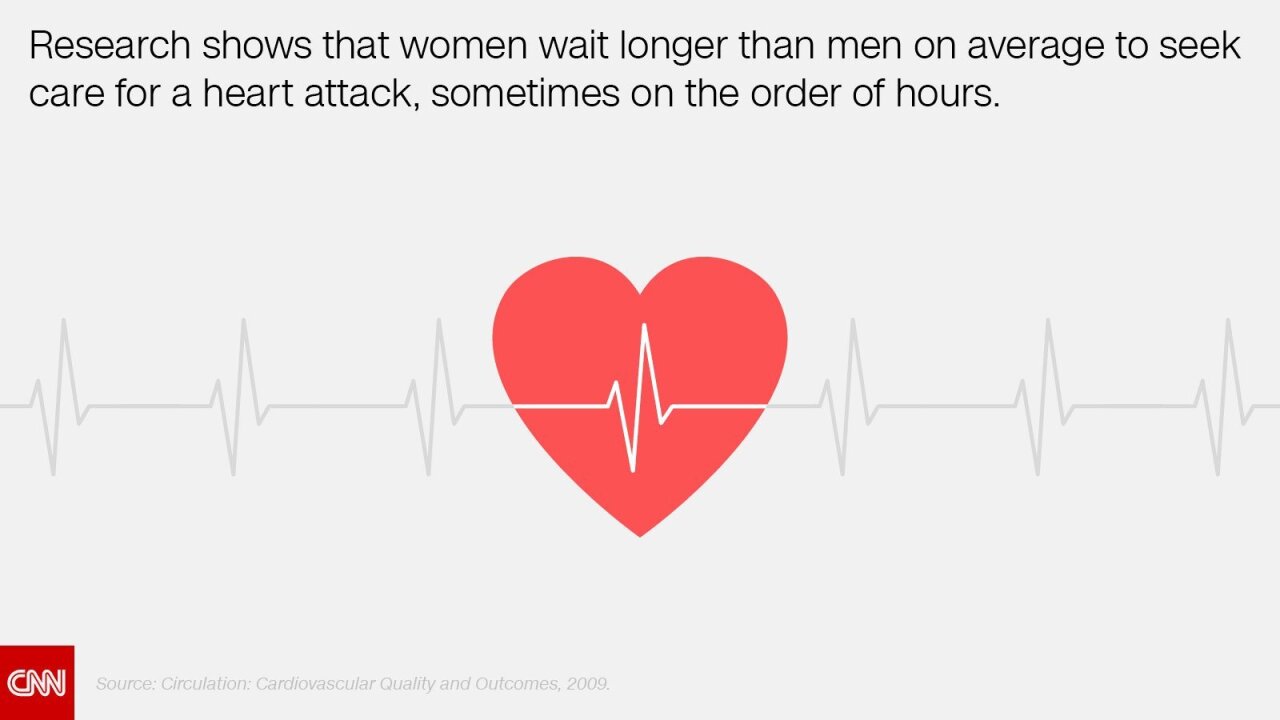 The risk of having a heart attack appears to be rising among young women, according to a new study, and researchers are trying to figure out why.

When analyzed across five-year intervals, the overall proportion of heart attack-related hospital admissions in the United States attributable to young patients, ages 35 to 54, steadily climbed from 27% in 1995-99 to 32% in 2010-14, with the largest increase observed in young women, according to the study, published recently in the journal Circulation .

During those periods, there was a rise in these admissions from 21% to 31% among young women, compared with 30% to 33% among young men, the study showed.

"The takeaway message is that an increasing percentage of heart attacks is occurring among younger patients, even though our population is aging, and the biggest increase seems to be among young women," said Melissa Caughey, senior author of the study and a research instructor in the Division of Cardiology at the University of North Carolina's School of Medicine at Chapel Hill.

A heart attack, or acute myocardial infarction, occurs when a part of the heart doesn't receive enough blood. Each year, about 790,000 Americans have a heart attack, according to the US Centers for Disease Control and Prevention . Heart attacks most often occur as a result of heart disease⁠, the leading cause of death in the United States.

Globally, 85% of all cardiovascular disease-related deaths are due to heart attacks and strokes, according to the World Health Organization .

The data came from the Atherosclerosis Risk in Communities Study , or ARIC, and the hospitalizations were in four communities: Forsyth County, North Carolina; Washington County, Maryland; Jackson, Mississippi; and eight northwest suburbs of Minneapolis.

The researchers took a close look at young patients, ages 35 to 54, who made up 30% of the hospitalizations.

Within that group, the annual incidence of heart attack hospitalizations decreased from 1995 to 2014 among young men, but an increase was observed among young women, the researchers found.

"When we looked at the incidence -- meaning the number of patients who had a heart attack each year, divided by the total population of patients in the group -- we saw that there was actually a decrease in incidence among young men, and that sort of paralleled with what we see in the older populations, but we saw there's a slight increase for the young women," Caughey said.

"That was surprising, because it's going against the other trends in other demographic groups," she said. "There have been previous studies from the same ARIC surveillance that have shown a decline, and they were predominantly older populations or older patients. ... The national trends are also showing the same thing, that there's a decline in the incidence of heart attack."

Compared with young men in the study, the young women were more likely to have medical insurance and a history of hypertension, diabetes, chronic kidney disease and stroke, the researchers found. The young women also were more often black and less likely to be smokers.

The study, which was published online in November , had some limitations, including that it involved data from only four communities. More research is needed to determine whether similar trends would emerge nationwide.

Additionally, the data was limited to medical records and did not include information relating to obesity , a known risk factor for heart attack.

"The initial thing I thought when I saw the high rate of diabetes in the women was, 'what about obesity?' And the study didn't have information on whether or not these women were obese," said Dr. Nieca Goldberg, cardiologist and medical director of the Joan H. Tisch Center for Women's Health at NYU Langone Health in New York, who was not involved in the study.

Such risk factors -- including Type 2 diabetes and high blood pressure -- may help explain why there has been a rise in heart attacks among young women, but more research is needed to really pinpoint what could be driving this rise, Goldberg added.

"It is complex. Are the risk factors and symptoms being recognized by the providers? Are the patients, although they have insurance, taking the time out to make an appointment? Was it difficult to get an appointment so they just gave up?" Goldberg asked.

"It's possible, but look at some other behaviors in this age group. People are working and spending more time than in the past at their desks and are not physically active. Lack of physical activity is also a risk factor," she said. "Lack of sleep and increased stress raises blood pressure; that's also a risk factor."

The study findings are "particularly striking because the population is aging, and yet we're seeing that a higher proportion of heart attack patients are young patients," said Dr. Harmony Reynolds, co-leader of the Sarah Ross Soter Center for Women's Cardiovascular Research and an associate professor of medicine at the NYU School of Medicine in New York.

This is probably linked to risk factors that have also become increasingly common among heart attack patients, such as diabetes and high blood pressure, said Reynolds, who was not involved in the study.

Additionally, women were less likely to get certain types of therapies, such as medicines that lower cholesterol and prevent clotting. However, despite previous research finding higher mortality rates among women who had heart attacks, the risk of death from any cause after a year was comparable for women versus men.

Reynolds said many people are not aware of their risk factors for heart attack and need to be proactive about talking to their doctors about how to reduce their risk. Many also may not be aware that heart attacks can look different in women, who are more likely to have atypical symptoms such as nausea or sweating, she added.

Another study, published last year in the journal Circulation , found that among adults 55 and younger, women were more likely than men to experience lesser-known acute heart attack symptoms in addition to chest pain -- and more than half of doctors seeing women who seek care for those symptoms did not realize that the symptoms are heart-related.

Some of those heart attack symptoms also can include shortness of breath; lightheadedness; or feeling pain or discomfort in one or both arms, the back, neck, jaw or stomach, according to the American Heart Association .

"Some people expect that heart attack is going to feel like it looks in the movies -- like people are going to clutch their chest and lie down on the floor and feel horrible -- and for some people, it's a lot more subtle than that," Reynolds said. "I saw somebody last week who felt a heart attack in her two front teeth."