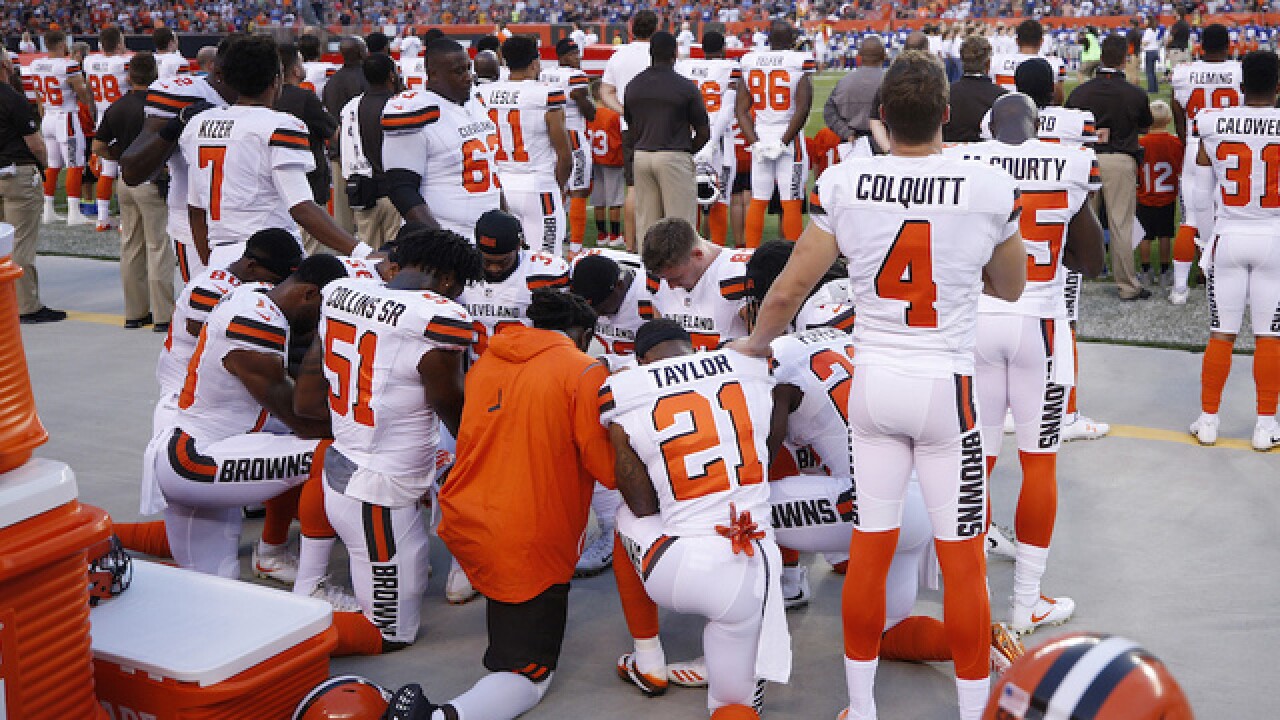 Copyright Getty Images
Joe Robbins
<p>CLEVELAND, OH - AUGUST 21: A group of Cleveland Browns players kneel in a circle in protest during the national anthem prior to a preseason game against the New York Giants at FirstEnergy Stadium on August 21, 2017 in Cleveland, Ohio. (Photo by Joe Robbins/Getty Images)</p>

Kneeling and bowing their heads, the Cleveland Browns bonded over something bigger than football.

More than a dozen players huddled together on the team's bench Monday night to protest during the national anthem.

The group, which included veterans, rookies, starters and backups, gathered in front of some water coolers and behind their teammates who stood on the sideline shortly before the Browns hosted the New York Giants.

Colquitt, one of two white players in the group, also placed a hand over his heart.

The protest was the largest so far in a movement started last season by quarterback Colin Kaepernick, who is currently out of the NFL. In recent days, Seattle defensive lineman Michael Bennett and Philadelphia defensive back Malcolm Jenkins also have called attention to what they feel is racial injustice in the country.

Oakland running back Marshawn Lynch also has sat during the national anthem in the preseason, but hasn't elaborated on his reasoning.

Browns coach Hue Jackson drew criticism last week when he seemed to indicate he didn't want his players to protest. However, Jackson clarified his remarks to say he respected any player who wanted to demonstrate.

"The intent of my comments was not to discourage individual expression from our players in light of a cause that moves them to personal expression," Jackson said. "I'm disheartened that I gave anyone that impression because I did not speak with enough clarity. However, my words did reflect my concern -- that I would express to any player -- about protesting during the anthem. There are many effective ways athletes can utilize their platform if they so desire, but I would respect any individual decision, as ultimately, it would be the player's choice after much thoughtful dialogue."