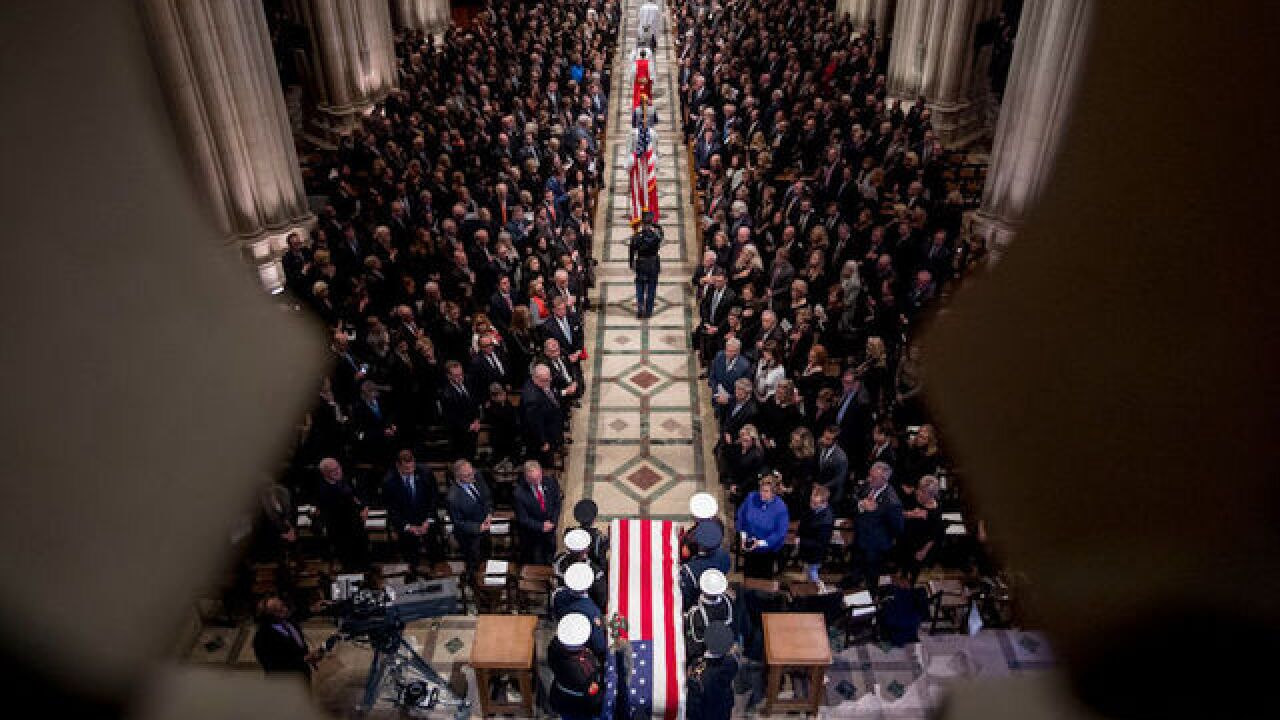 Image copyright 2018 Getty Images. All rights reserved. This material may not be published, broadcast, rewritten, or redistributed.
Andrew Harnik
<p>The flag-draped casket of former President George H.W. Bush is arrives carried by a military honor guard during a State Funeral at the National Cathedral, Wednesday, Dec. 5, 2018, in Washington. </p>

Numerous speakers marked the occasion with shared memories and kind words for the departed 41st president.

Here's what they had to say.

"Brian, this stands for ceiling and visibility unlimited when I was a terrified 18- to 19-year-old pilot in the Pacific, those, those were the words we hoped to hear before takeoff. It meant perfect flying. And that's the way I feel about our life today, CAVU. Everything is perfect. Barbara and I could not have asked for better lives. We are truly happy and truly at peace."

-Former Canadian Prime Minister Brian Mulroney, recalling a conversation he had with Bush in 2001. This is what Bush told him when they came upon a plaque that said "CAVU"

"Your decency, sincerity and kind soul will stay with us forever. So through our tears, let us know the blessings of knowing and loving you, a great and noble man. The best father a son or daughter could have."

"I said, 'Dad, I love you and you've been a wonderful father.' And the last words he would ever say on Earth were, 'I love you, too.'"

"Some have said in the last few days, 'this is an end of an era.' But it does not have to be. Perhaps it's an invitation to fill the hole that has been left behind."

“My hunch is heaven, as perfect it must be, just got a bit kinder and gentler ... so Mr. President, mission complete. Well done, good and faithful servant,”

The full service can be viewed below.

Susan Gonzalez is a digital producer and journalist for the E.W. Scripps national team. Follow her on Twitter @TheNewsan.