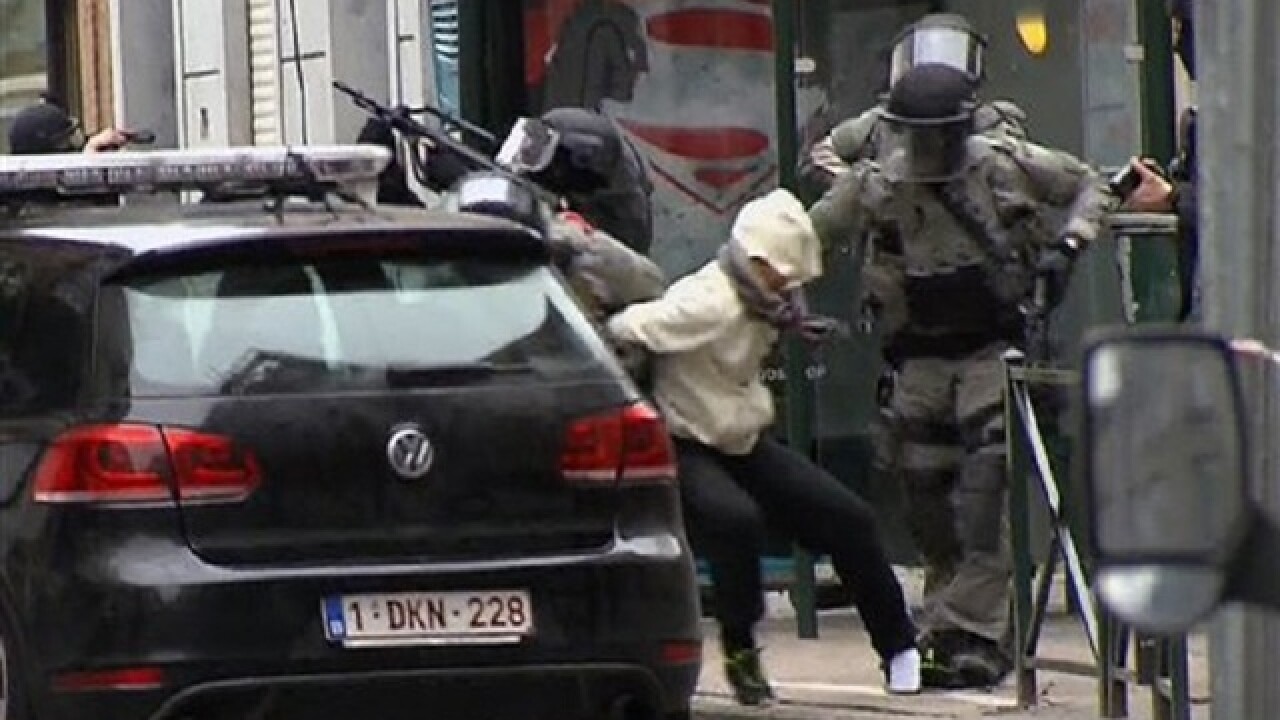 <p>FILE - In this Friday March 18, 2016 file framegrab taken from VTM, Salah Abdeslam, centre, is arrested by police and bundled into a police vehicle during a raid in the Molenbeek neighborhood of Brussels, Belgium. Belgian prosecutors confirmed Wednesday April 27, 2016 that Paris attacks suspect Salah Abdeslam was handed over to French authorities. (VTM via AP) BELGIUM OUT</p>

PARIS (AP) — Paris attacks suspect Salah Abdeslam, Europe's most wanted fugitive until his capture in Belgium last month, was transferred Wednesday to France so he can appear before investigating judges who will decide how to charge him, the French prosecutor's office said.

Prosecutors say Abdeslam, who was arrested in Belgium last month after four months on the run, was instrumental in coordinating logistics for the Nov. 13 attacks that killed 130 people at Paris night clubs, a noted music hall and the sports stadium outside the city. The Islamic State group claimed responsibility for the carnage.

The quick, secret transfer surprised even Abdeslam's lawyer in France, who rushed from Lille to join his client at the Justice Palace.

Frank Berton, who announced before the transfer was disclosed Wednesday that he would represent Abdeslam, described his client as a young man "falling apart" and ready to cooperate.

He told iTele TV that his client wants to talk, "he has things to say, that he wants to explain his route to radicalization" as well as his role in the attacks — but not take responsibility for others.

"That means be judged for facts and acts that he committed but not for what he did not commit simply because he is the only survivor of the attacks," Berton said.

Testimony from Abdeslam, a 26-year-old Frenchman of Moroccan origin, will likely prove significant to definitively linking events of that night, which involved three teams of attackers who blew themselves up or sprayed gunfire. His brother was one of the suicide bombers.

Abdeslam's precise role in the attacks remains a mystery. He returned from France to Belgium afterward, calling cohorts in Brussels to fetch him. However, a suicide belt bearing his fingerprints was found south of Paris and a car he had been driving was found in a northern Paris district, prosecutors said.

He was captured just four days before March 22 bombings at the Brussels airport and a metro station that killed 32 people. The Islamic State group also claimed responsibility for those attacks.

Abdeslam is charged with attempted murder over a March 15 shootout with police in Brussels. He was arrested three days later and police in Belgium have questioned him about any potential links to the suicide bombers in the Brussels attacks.

French Justice Minister Jean-Jacques Urvoas said Abdeslam would be placed in isolation in a prison in the Paris region, watched by guards specially trained to deal with "people reputed to be dangerous." He did not name the prison where Abdeslam would be housed.

Berton, who has taken on tough cases in the past, said in the iTele interview that Abdeslam "has the right to be defended."

"We're in a democracy ... we're not in a totalitarian state," Berton said.

Former chief terror magistrate Jean-Louis Bruguiere said that while Abdeslam's arrival in France is important, the investigation is far from over.

"What is important is not just his declarations," Bruguiere said on iTele, "but to be confronted with concrete elements of the probe, a very thick file."