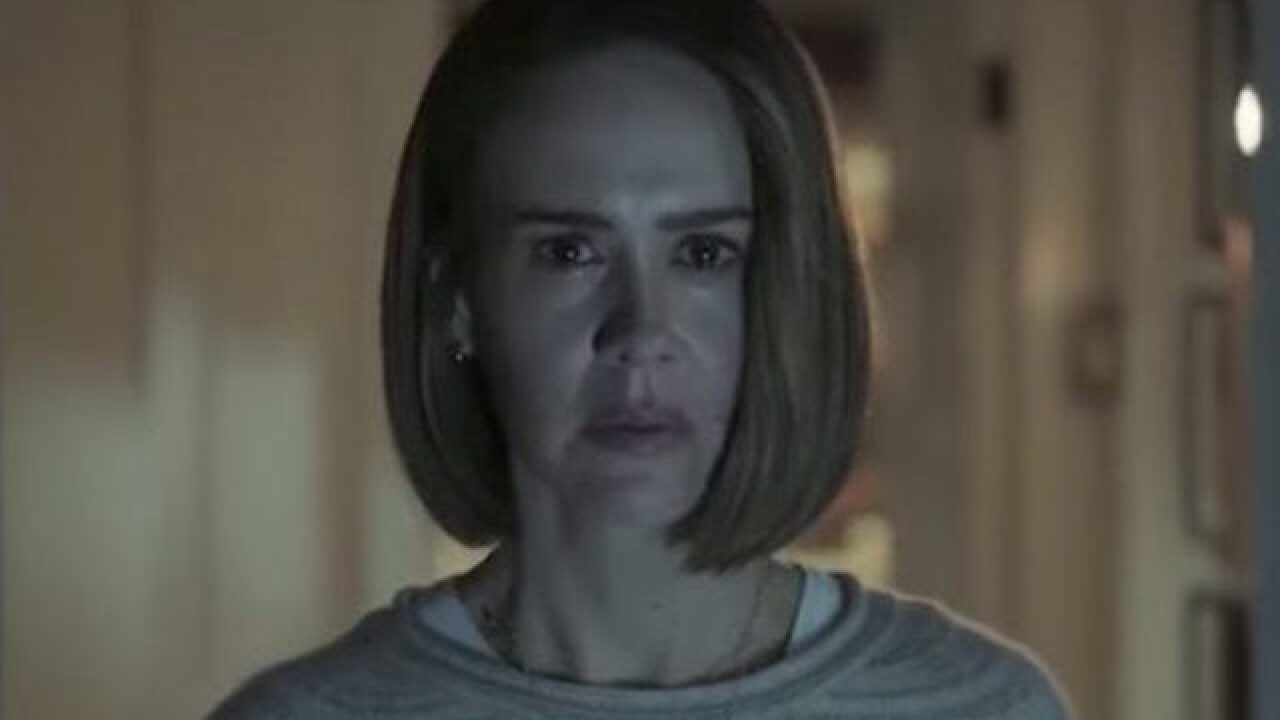 Editor's note: There are no triggering images embedded in this story. However, to explain to those without trypophobia what the disorder is like, we have had to use a few descriptive phrases of common triggers. Please be cautious while reading.

It was supposed to be a fun lunch outing in the Big Apple with her mother and grandmother. But when Jennifer Andresen saw an advertisement for this season's "American Horror Story" on the side of a New York taxi, she had to pull her car over, and fast.

"I was having a full-blown panic attack," said Andresen, who lives in Norwalk, Connecticut. "My pulse was racing. I was so nauseous. I thought I would throw up. My mother and grandmother were like, 'What is wrong with you?' I didn't want to ruin my family's day, but I couldn't help myself."

What Andresen has is trypophobia, an intense, irrational fear of small holes and clusters of circles and bumps, such as those in a honeycomb, lotus flower or bubble bath. The phobia is a key part of this season's "American Horror Story: Cult," as the main character, Ally Mayfair Richards (played by Sarah Paulson), is overwhelmed in the first episode by some holes in her soufflé and a coral in her therapist's office that she feels is staring at her.

"My husband and I were watching 'American Horror Story,' and I didn't have any idea what the show would be about," Andresen said, her voice rising nervously. "The piece of coral she saw freaked me out so badly that I had to tell my husband. Up to now, I've kept it to myself because it seemed so silly, so odd."

Andresen has general anxiety and "a bit" of obsessive-compulsive disorder, so her family was comforting. But that's not the reaction she gets from others. Other people say, 'What is wrong with you?' They don't understand," Andresen said. "But it's like anything else people can get upset about. People are scared of spiders, heights, clowns, and I'm scared of this. It's an actual phobia. It's real. It's definitely not a joke."

"American Horror Story" is promoting its new season widely, with bizarre images of body parts and clowns photo-edited full of holes. (The main character is also scared of clowns.) It was one of those large posters -- an image of a woman's face licking upward with a tongue riddled with holes -- that triggered Andresen.

"With the media exposure from 'American Horror Story,' it's going to get worse, and people are going to try to trigger us," said Sue M. of Hampshire, England. Sue, who has suffered from trypophobia since she was 5, did not want her last name to be used.

"I've seen an exponential increase of trigger images on Facebook and across the Internet," Sue said. "We'd had people join our Facebook support group, be welcomed into the community and then post a trigger picture and do harm to the group.

"Why do people do that? I suppose they enjoy seeing the reaction," she mused. "They are not only bullies but cowards as well, hiding behind their false name and the anonymity of the Internet."

A lifetime of aversions

Sue's first memory of disgust came when tripe, or cow stomach -- a common English staple full of indentations -- was placed in front of her at the dinner table. Despite an "idyllic" childhood and no signs of anxiety, her aversions grew.

"Honeycomb, watermelon, pomegranates, corn on the cob," said Sue, now 54. "I loved corn, but not on the cob, because it left holes. I thought I was just being quirky."

A nurse for over 30 years, Sue also had difficulty when caring for certain skin conditions on her patients. "I started to notice a pattern with an aversion to rashes, eczema and the like," Sue said. "I thought, 'Just kick your backside, get on with it.' "

Her disorder exploded a few years ago, when various images of holes and clusters photo-edited onto human skin went viral across the internet.

"That's the moment I realized I had a phobia. Someone had taken a lotus seed and Photoshopped it on someone's shoulder. I looked at it and felt sick, pulse racing, skin felt itchy. It stayed with me for weeks and weeks and weeks, and every time I thought about it," she said, "it made me sick."

Like Sue's, Andresen's fear of holes started as a child.

"I remember when I was little, a Disney movie came on, 'The Thirteenth Year,' where the boy turns into a merman," Andresen recalled. "But it looked like little holes on his skin, and I went crying to my mother."

She feels her anxiety and OCD could make her trypophobia worse, but she's not certain. After all, the aversions to holes began long before her other symptoms.

"It bothers me that I can't look at a picture, like a lotus flower," said Andresen. "It's like it's crawling on me, like the picture is on me. I get dizzy, I feel nauseated, and my head hurts. I have an anxiety attack times a thousand, like I'm jumping out of my skin.

"I have a baby and a 9-year-old, and when I'm with my kids, it can ruin the moment if we are doing something special. At one of the playgrounds, there is a honeycomb-looking thing, and I can't take them to play there anymore."

Andresen is a nurse as well but has yet to face an issue while caring for patients. If that were to happen, she said, she hopes some of her coping mechanisms work.

"I try to breathe, and I try to focus on something else in my head," Andresen said. "There've been times recently that I had to take anti-nausea medication. Sometimes, I have to get in the shower because I feel so itchy. And then I relax and cool down."

Sue also relies on her coping techniques to counter any triggers.

"Distraction works best for me: cute animal pictures, relaxing music, or I call a friend, anything to take my mind off it," Sue explained. "But in the early days, I wasn't that successful. Initially, you're drawn to the image, and you are transfixed. Then shock, horror, hot flushing, like you're going to vomit, and then you have to turn away. And it's not only the image. Even the narrative description can be enough."

Why holes and clusters?

Research into trypophobia is limited. Among the first to study the fear were psychological scientists Arnold Wilkins and Geoff Cole of the University of Essex in Colchester, England. In a paper published in 2013, they presented the theory that many of the world's most dangerous animals, such as alligators, crocodiles, snakes and poisonous fish, have clusters of bumps and holes on their skin. Perhaps the aversion could be some sort of innate flight-fight response to dangerous or poisonous animals?

University of Kent postgraduate researcher Tom Kupfer had a different notion. "Those images look to me like they would be perceived as cues to infectious disease or parasites," said Kupfer, who studies the emotion of disgust and the role it plays in our daily lives. "I wouldn't be surprised if this is actually a disorder based on disgust and disease avoidance."

To prove his point, Kupfer studied reactions to images of leprosy, smallpox and measles, which show up as small bumps and clusters on the skin. "Smallpox alone killed millions of millions of people, so if a human ancestor was predisposed to attend to those bumps, to dislike them and stay away from them," said Kupfer, "that could provide a survival advantage."

"It can also have something to do with decay," said An Lee, a doctoral student who worked on both studies. "For example, mold on bread or vegetables have certain visual cues and characteristics that are similar to trypophobic stimuli. So, while we're not completely sure yet, it does seem to be some kind of evolutionary trait that will help or facilitate survival."

No one knows how many people have trypophobia, but based on extrapolation from recent studies, Lee believe the numbers could be quite high.

"I'd say about 5% of the population has shown some kind of reaction to these images," Lee said, "ranging from very severe reactions to mild dislike. It's similar to other conditions and phobias and anxiety disorders where you see a large range within the population."

According to Cole and Wilkins, the level of disgust with trypophobia increases if the holes are on human skin. That might explain the intense reactions of many sufferers to the "American Horror Story" advertisements, which tend to focus on faces with photo-edited holes.

There are also a number of trypophobia "trigger" sites on the Internet, where people post images of holes, bubbles and clusters, including many graphically added to human body parts. That makes it tough for someone with the condition to research trypophobia on the Internet without falling victim to an attack.

"A lot of that is click bait, just a way to get clicks and comments," Sue said. "But they don't understand the impact they have."

She suggests searching for "trypophobia without triggers" or disabling the images on your computer. There are also private Facebook support groups, like this one that Andresen and Sue visit, that a person with symptoms can join for advice and support.

"People come into the group and say 'Thank God! I have a name for what is wrong with me. I'm not going mad. I'm not alone anymore,' " Sue said.

Both women hope the current attention on trypophobia will help others with the condition find support and encourage researchers to begin medical studies to understand how to help those with the disorder.

"I want to know why I have it and is there a way to get over it," Andresen said. "At least 'American Horror Story' is getting the phobia out there and letting people know what it is. Maybe this will give people a better understanding of what we live with."

"Hopefully, it will jump-start research," Sue said. "But it could also backfire. Trypophobics don't tend to talk to anyone without trypophobia because nobody gets it. If there is a lot of negative reaction and triggering behavior it could damage progress by driving people back underground."