As Katie Stubblefield brushed her fingers across her face, she could feel the wound.

Her vision is greatly impaired due to her injury, but touching her face allowed her to feel what her doctors were working around the clock to treat. She could feel where her face was swollen. She could feel the portions that were missing.

That was before Katie, at 21, became the youngest person in the United States to receive a face transplant. The transplant, performed last year, aims to restore Katie's face structure and functions -- such as chewing, breathing and swallowing -- which were lost in a severe gunshot injury, the haunting outcome of a suicide attempt as a teenager.

Now, Katie hopes to use her historic surgery to raise awareness about the lasting harms of suicide and the precious value of life.

'I had no clue what a face transplant was'

In the days prior to Katie's suicide attempt, she faced a number of emotional hurdles.

She underwent surgery for chronic gastrointestinal problems, and she faced betrayal in a personal relationship. Around that time, Katie's mother, Alesia, was abruptly fired from a teaching job at Katie's school because Alesia "questioned several decisions that were made lacking integrity," Katie's father, Robb, told CNN.

On March 25, 2014, when Katie was 18, her older brother, Robert Stubblefield, heard the gunfire and found her after she harmed herself in a bathroom at his home in Mississippi.

Katie doesn't remember that tragic day when she lost her face. She has said that she doesn't remember much of that year -- including being hospitalized in Oxford, Mississippi; being flown to another hospital in Memphis, Tennessee; and then being transferred to Cleveland Clinic in Ohio, where she would undergo her face transplantation three years later.

It was in Memphis where Katie's parents, Robb and Alesia, heard the term "face transplant" for the first time.

"There was an older trauma surgeon who basically told us, 'It's the worst wound that I've ever seen of its kind,' and he said, 'The only thing I can think of that would really give her functional life again is a face transplant,' " Robb said.

"I was standing there thinking, 'What do you mean, a face transfer? What do you do?' "

When Katie was later told about the possible procedure, she said, she was equally stunned.

"I had no clue what a face transplant was," Katie said. "When my parents helped explain everything to me, I was very excited to get a face again and to have function again."

Full and partial face transplants are medical procedures that involve replacing all or parts of a person's face with donated tissue, including skin, bone, nerves and blood vessels from a deceased donor.

Similar to Katie, the first recipient of a face transplant in the United States was a woman who survived a gunshot wound to the head. That patient, Connie Culp, underwent a 22-hour transplant surgery at Cleveland Clinic and debuted her new face in 2009.

That was a near-total face transplant. The world's first successful full face transplant was conducted at Vall d'Hebron University Hospital in Barcelona, Spain, in 2010.

As for where Katie fits in, "only 40 people in the world have ever had a face transplant, and we believe that she is the 39th person," said Susan Goldberg, editor-in-chief of National Geographic magazine.

"We think her story is one of the most important stories that we will do this year," Goldberg said of the magazine. "We thought it was just such a moving and inspiring story that is about everything from human journey to breakthrough medicine and science."

'You take it for granted, the different components of our faces'

The surgical team used CT scans of the jaw of Katie's older sister, Olivia McCay, to 3D-print a model template for the reconstruction.

"We made a plate designed for the combination of Katie and her sister's jaw, and that's what we used to make Katie's jaw before we did the transplant," Gastman said. 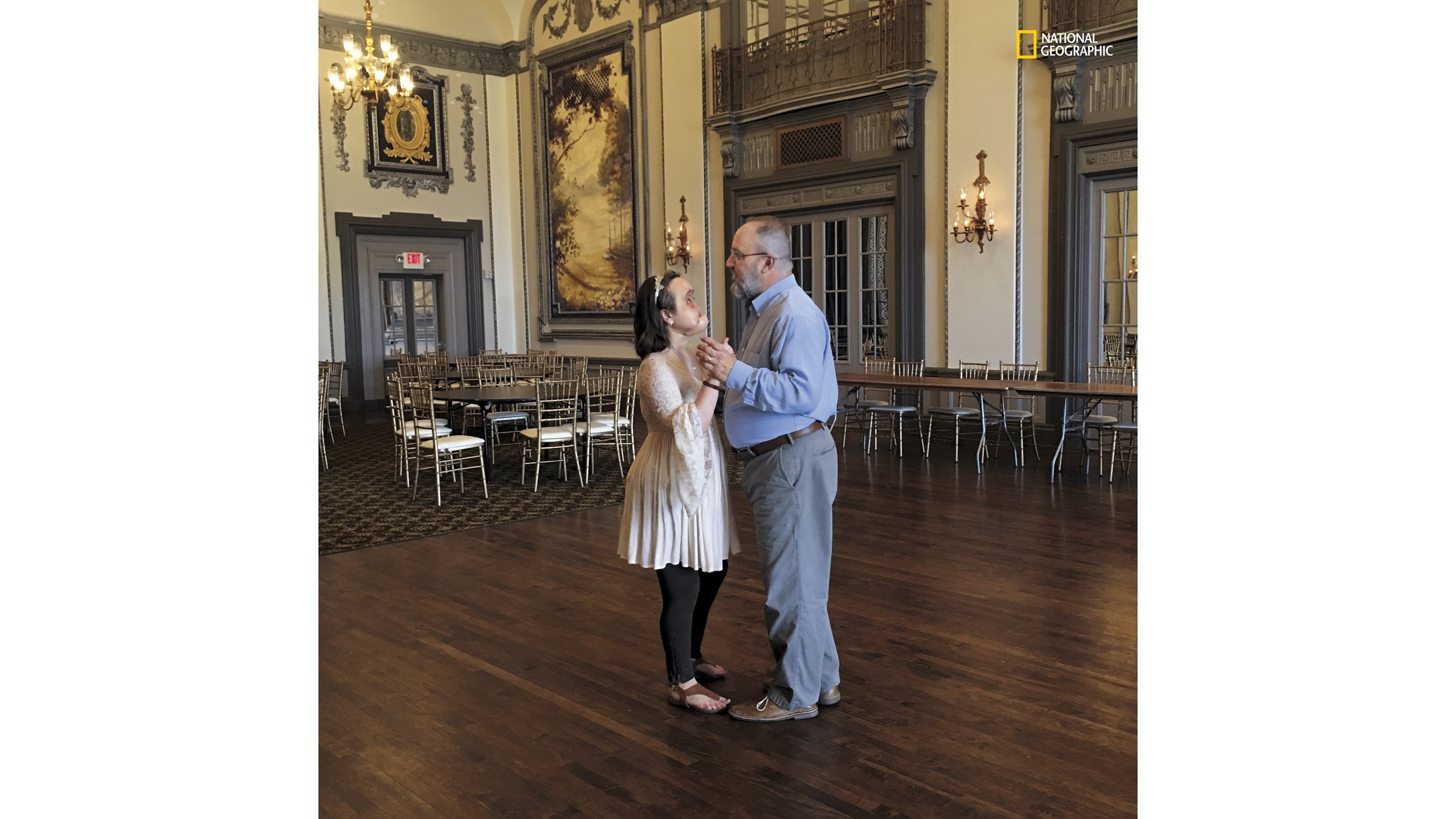 He noted that when he first saw Katie's injury, he worried that she might not live.

In March 2016, Katie was placed on the waiting list for a face transplant. Fourteen months later, a donor was found: Adrea Schneider, a 31-year-old woman who died of a drug overdose, National Geographic reported. Before the procedure, Katie underwent extensive psychological evaluation as a face transplant candidate and suicide survivor.

After she was cleared to receive her new face, the 31-hour surgery began May 4, 2017. It involved 11 surgeons, several other specialists and virtual reality. The surgery was completed the next day.

"I am able to touch my face now, and it feels amazing," said Katie, who still has some difficulty speaking clearly.

Her father, Robb, translated some of her sentiments: "You take it for granted, the different components of our faces -- the bone, the tissue, the muscle, everything -- but when it's gone, you recognize the big need. Then when you receive a transplant, you're so thankful."

Katie was discharged from Cleveland Clinic on August 1, 2017. She takes immunosuppressive drugs to reduce her risk of transplant rejection, which occurs when a transplant recipient's immune system attacks the transplanted organ or tissue. She will continue to take the medication for the rest of her life.

"I'm definitely taking many, many daily steps," Katie said of her rehab progress, adding that her family has been a big help in her recovery and that her faith has kept her strong.

"Life is precious, and life is beautiful," she said.

Face transplantation is considered experimental, and insurance companies, Medicare and Medicaid don't cover it. A grant from the US Department of Defense, through the Armed Forces Institute of Regenerative Medicine, covered Katie's transplant, according to National Geographic. The institute works to develop advanced treatment options -- including face transplantation -- for severely wounded servicemen and -women.

"I remember Dr. Gastman mentioned to me, he said basically that Katie was kind of the quintessential potential candidate for a face transplant. One, because of the type of wound that she suffered, but also she is in that age bracket of so many soldiers," Robb said. "She's in that late-teen to early 20s, where so many young soldiers are being wounded and injured."

While Katie's medical care team hopes that her surgery can advance the field of face transplantation, there are many other hopes for her future.

Katie plans to attend college online soon, possibly followed by a career in counseling and motivational speaking. She hopes to raise awareness about suicide and suicide prevention.

"My first wish for Katie is to be happy," Gastman said.

"That's number one, but beyond that, I'd like her to have some level of normalcy," he said. "Then, she can do all that and become a spokeswoman for so many aspects -- for how to be strong in the face of adversity and not to make a singular decision dictate who you are. Further, on the other hand, how much a singular rash decision made by so many young people today could negatively change your whole life."

He said Katie "had the ultimate second chance."

Globally, close to 800,000 people die due to suicide every year, which is about one person every 40 seconds, according to the World Health Organization.

In the US, suicide rates significantly climbed in 44 states from 1999 through 2016, according to a report published in June by the Centers for Disease Control and Prevention. Nearly 45,000 lives were lost to suicide in 2016, and more than half of people who died by suicide did not have a known mental health condition.

In 2016, guns were the most common method used in suicide deaths in the US, accounting for 22,963 -- almost half of all -- suicide deaths, according to the National Institute of Mental Health.

Among young people, "I think we do a pretty decent job of educating them about sex and about drinking and driving," but education around suicide prevention is lacking, Alesia said.

"I can honestly tell you, for Katie, we do not believe for one moment that she wanted to die," Alesia said. "But we do believe she hit that low where she definitely tried and thought about it, and for a moment -- 20 seconds or less -- kids can make those decisions."