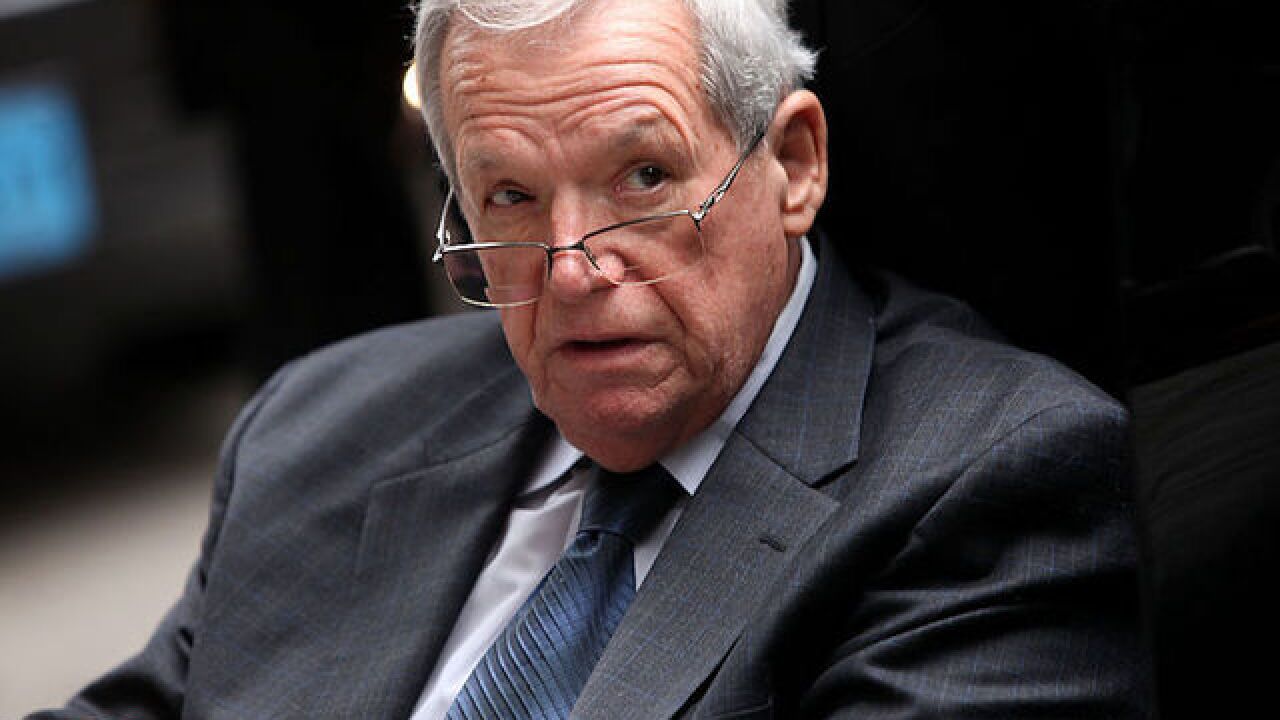 Copyright Getty Images
Joshua Lott
<p>CHICAGO, IL - APRIL 27: Former House Speaker Dennis Hastert leaves the Dirksen Federal Court House in a wheelchair after his sentencing on April 27, 2016 in Chicago, Illinois. Hastert was sentenced to 15 months in prison and ordered to pay $250,000 to a victim's fund for breaking banking laws as he sought to pay a man identified only as Individual A, 14-years-old at the time, millions of dollars to keep quiet about past sexual abuse. The abuse occured during Hastert's years as wrestling coach at Yorkville High School decades ago. (Photo by Joshua Lott/Getty Images)</p>

Former US House Speaker Dennis Hastert is banned from having contact with anyone under 18 unless an adult is present who's aware that he pleaded guilty in a hush money case related to the sexual abuse of teen boys, according to new restrictions imposed by a federal judge.

"You shall not have contact with any person under the age of 18, except in the presence of a responsible adult who is aware of the nature of his/her background and current offense, and who has been approved by the probation officer and treatment provider," the restrictions state.

Hastert never faced sexual abuse charges because the statute of limitation had expired, but he  pleaded guilty  in October 2015 to structuring bank transactions in a way that evaded requirements that he report where the money was going.

The money was part of a deal to keep a former student quiet about Hastert's prior sexual abuse of teenage boys when he was a teacher and coach, according to investigators.

Once one of the most powerful men in America, Hastert is now banned from having any pornographic material or using any "sex-related telephone numbers." The restrictions also require him to provide copies of his phone bills and credit card statements to his supervising probation officer, and forbid him from using the internet without prior approval from a probation officer.

US District Judge Thomas Durkin placed those new conditions on Hastert late Tuesday, but it was not clear what spurred the action. The restrictions come a day after a sealed order in the case was filed.

The US attorney's office declined to comment, and attorneys for Hastert did not respond to a request for comment.

Hastert was sentenced to 15 months in prison  and ordered to pay $250,000 to a victims' fund as part of the case. He also was sued by a student seeking to collect $1.8 million of what he said was a $3.5 million deal to cover up his past misconduct.

"I'm deeply ashamed to be standing before you here today," Hastert said in court during his sentencing in April 2016. "I know I'm here because I mistreated some of my athletes as a coach."

Scott Cross, who was sexually abused by Hastert when he was 17,  said it took him 37 years  to speak out about the abuse.

"You think about shame, guilt, embarrassment, humiliation -- the Hasterts of the world have so much trust and respect over you that you really have a hard time processing and understanding it," Cross told CNN in July when the ex-speaker was released.

Hastert, the longest-serving Republican speaker, was  a congressman from 1987 to 2007 .